Triple Emmy-award winner Brad Garrett - best known for his role as Robert Barone on Everybody Loves Raymond - is returning to his first love: stand-up comedy. He recently opened a comedy club in Las Vegas and is performing at the Toronto Just for Laughs Festival July 10 and in Montreal four days later.

On and off stage, Garrett is a light-hearted jokester, but it's no laughing matter when it comes to his car collection. He owns 10 vehicles, new and old, that share one common trait - most are convertibles.

"I'm a bit of a car junkie. Because I'm a giant, I don't fit in 85 per cent of the cars. I'll get the heat for one and I'll sit in it and then it's like I need the jaws of life and some lotion to get out," says the 6-foot-7 50-year-old. "The last time I got out of the Vantage I had to literally do a tuck-and-roll onto the pavement before even standing up. It isn't pretty in a jacket."

His favourite new car is the Bentley. "To me, the Bentley GT is as good as it gets," says Garrett in his familiar deep, husky voice on the telephone from Tropicana, his Vegas comedy club. "As far as all the bells and whistles and having the 12-cylinder - it's a very fast, responsive, comfortable car.

"As far as the older ones, it's the '48 Town and Country. I put a 300 Hemi in it. A lot of people will tell you, 'Boy, you just killed the value of the car and you're not allowed in our Chrysler club!' I've been thrown out of a lot of car clubs, but I'm really not a car club kind of guy - I have my hair," he jokes.

He also replaced the engine in his '53 Caddy. "A lot of the purists hate me for this. I don't believe in having cars that are garage queens. If I have a car, I want to get in and drive it. And you buy the old cars for the way they look not so you can break down on the (highway) on a Sunday when it's 102 degrees. I just want to know I'll get there."

So what do all these flashy cars say about him? "That I have a small penis. That's what all my cars say about me," he jests. "And that I'm bald. My cars aren't really paid for so I'm not bald. I have a bald spot. If I was totally bald, they'd be totally paid for. I'm hoping they're paid for by the time I'm bald."

Unlike other celebrity car nuts like Jay Leno, Garrett doesn't tinker with his wheels. "Honey, I'm a Jew. We don't tinker with cars. We open up the hood and we get on the cell phone. I'm nothing like Leno except for I have a bigger jaw and a smaller penis."

"I wish I did have Leno's talent as far as mechanically or comedically. I couldn't change a spark plug. I don't read the manual. These manuals are 400 pages! By the time I get through the German section, I'm exhausted. I had the Vantage two days and I called the dealer and said. 'How do I open the gas cap?' I have no ability as far as the technical aspect. I wish I did.

"I've always loved the vintage cars. I love anything old - you should meet my wife. She's on a resuscitator right now or I'd put her on the phone," jokes Garrett, who dropped out of UCLA after two months to pursue comedy. His career skyrocketed after winning $100,000 on a TV talent show called Star Search in 1984 and then appearing on The Tonight Show with Johnny Carson.

"What's great about old cars? I know it's a cliché to say they don't make them like they used to, but they don't. To me, there's nothing cooler than a classic car going down the road. Being a native of California and growing up on the coast, and my girlie side, you want to have a convertible in L.A."

But the old cars are still small for someone of his stature. "The Caddys are a bigger car, but again back in '48 the average guy was 5-foot-6. I have to get the seats put back even in the giant Caddy. Or maybe I'll just sell it to Tom Cruise … I have more legroom and headroom in my Porsche Turbo than I do in my '53 Caddy."

His obsession with cars started as a teen. "When I turned 16, my dad gave me a 1973 (Ford) Pinto Runabout. He said just go in reverse everywhere you can. The first car I bought was a '78 Mustang with the T-roofs, white with a black and gold velour interior. It was a chick car. They called me Huggy Bear," he laughs.

After that, he owned a Porsche 924. "I was the only waiter at T.G.I. Friday's that was driving a Porsche. I had that car fixation early on. It's hard to afford a car like that when you're waitering. I was working about seven nights a week to pay for that thing."

He landed into trouble with it, too - at a Halloween party in the 1980s. He was dressed as legendary comedian Bill Cosby.

"I was starting to do stand-up and I would do impressions of Cosby. I'm dressed as Cosby in black face - I'm made up by a professional artist kind of like Robert Downey in Tropic Thunder. And if you remember, Cosby was a spokesman for Coca Cola so I have a six-pack of Coke around my neck because I'm a large man and I'm able to carry that. I'm speeding - doing about 70 in a 50 and I get pulled over by the police. Guess what? He's African American - yeah. Right away, I figure so I don't get shot ... I'll just go into Cosby."

Garrett mimics his voice to a tee. "I can't stop the Cosby voice because I'm scared to death. He wrote me up and chuckled. Put it this way, I had to throw away my pants after that evening."

There's still one car he'd like to add to his collection. "I love my old convertibles and the new ones, too. But one day I would love to have an old Aston, like a DB5 or DB6." 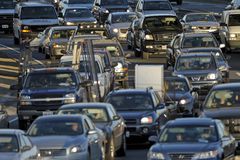