You never forget your first love or your first car and, if you've never owned an automobile, you never forget that either. I'm reminded of this universal truth every year at this time because it was on a cold January morning 15 years ago that I finally let my first love go - a 1982 Volkswagen Rabbit. Since then there have been various cars, but none has ever matched that little engine's magic and the majesty.

The Rabbit (as it was known) had a mysterious past. It had started life in Zimbabwe and been shipped back to Canada by its first owner, who quickly decided to upgrade and sold it to our family in 1983. The first time we opened the hood we found what looked like dried mopane tree leaves stuck around the engine. If I asked far enough in advance, the car was mine. This Volkswagen was the proverbial high school ride.

The Rabbit was a miracle of understatement. A four-door hatchback, it boasted a four-cylinder, 1.7-litre single-overhead-cam gas engine capable of generating up to a mind-blowing 74 hp. Compact was a generous label to apply. If you put a suitcase in the trunk, it was full. It could fit, maybe, six people very uncomfortably. You could park the Rabbit in a space big enough to accommodate a large motorcycle.

There was power nothing. The car was unlocked from the outside by a key and from the inside by the application of thumb and index finger to the lock knob. The Rabbit had a heater and air conditioning (if it was hot, you rolled down one window - if it was really hot you rolled down two). Most curiously, the Rabbit had been painted a strange shade of powder blue. It was light and bright and tropical and, during the winter months, this sunny colour scheme made the little car easy to spot under a layer of snow.

While diminutive, the Rabbit ran more like a killer hare. It was durable and reliable. Rain, sun, snow, hail, the Rabbit withstood them all. I took it skiing, wind-surfing, hiking, and on road trips to various cottage debaucheries. It briefly had a car stereo (purchased from a door-to-door salesman) but that broke down quickly. Consequently, music in the Rabbit was provided by a battery-powered portable tape player laid on the passenger seat (when empty) and on the passenger's lap (when occupied).

We separated briefly - when I left home and travelled - but in the early nineties we were reunited after I acquired it from my family. To them the Rabbit was ready for a stew but I knew different. After all, maintenance was cheap. Pretty much all I had to do was change the oil and spark plugs and get the tires rotated. I rarely paid more than $70 for a tune-up.

By January 1995, however, time was catching up. My circumstances had also changed with the arrival of my first child. As comfortable as I felt in the Rabbit, it was unsettling to consider the idea of squiring a newborn around in a vehicle that was so old there may as well have been hieroglyphics on the dashboard. Still, I tarried. Perhaps it could be a second car? Kept for the occasional jaunt? As if sensing my dilemma, the Rabbit did the honourable thing. One chilly morn, it simply did not start. Nothing and no one could bring it back to life.

I had never put down an automobile before and called a towing company looking for answers. A surly woman answered.

"You want it towed to a shop?"

For a moment, it was tempting to say yes. Maybe some automotive CPR would resuscitate the Rabbit? It only had around 300,000 km on it. But I snapped back to reality. "No, it's never going to work. It's old."

"You want it demolished?"

"How much does that cost?"

"We'll give you twenty-five dollars."

The idea seemed immoral. "You'll give me?"

The woman's tone adopted an even more exasperated edge. "Yes, sir…" She used the word "sir" as an insult, as only a Canadian can. "We will give you (this she said loudly, as if she was talking to someone who did not speak English) twenty-five dollars for your automobile." I was dumbfounded. Was I really taking Old Yeller round the woodshed?

The rest remains a blur. A man showed up in a tow truck. He was bearded and bellied, smelled of Player's Light cigarettes and looked like a lawn gnome who had been using steroids. I signed some papers and ripped the Rabbit symbol from the car and was then given twenty-five dollars cash. It would be nice to say something poignant was done with the money - donated to charity, for instance, or given it to a homeless person - but, to be honest, I just went to a pub and had a club sandwich.

Proust had his madeleine. For me it's that first car. Sometimes, when the moon is full and the summer night alive with the sound of crickets, I can still hear the Rabbit's fitful hum and feel the humid breeze blowing through the driver's side window. 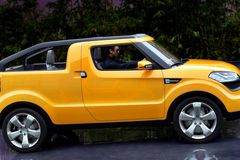