I have questioned my own mental health a few times – like last week, when I decided to take a 1,400-kilometre car trip with a cat. Was I insane? The evidence said yes.

Just a few months ago, I wrote about my miserable experiences with cats in the car, and got responses from hundreds of people – most of them drivers with horror stories even worse than mine. One guy crashed when his cat got wedged under the brake pedal. Another driver finished a trip wearing an industrial gas mask after his cat repeatedly sprayed the back seat with urine. Then there was the woman who was so tormented by her cat's howling that she released him from the car carrier, only to be clawed so badly that she needed stitches.

I knew their pain. My own cat travels had produced a long series of disasters, including a cat that got lost in Northern Ontario, and a hellish trip to the Deep South with two male cats that turned our Honda Civic into a rolling litter box. Then there was the time I got a claw in the eyeball.

Despite all this, I was ready to attempt another long drive with a cat. My wife and I would travel from Georgia to Toronto, with one night in a hotel. Yes, I am an idiot. But I had fallen in love with a cat – a small tuxedo kitten that closely resembled Tyrone, the cat my wife and I adopted last winter from a city animal shelter.

We found the kitten in the landing field at Lookout Mountain, Georgia, my favourite gliding site. He was living outdoors, a tiny black creature at the mercy of passing cars, dogs and coyotes. We decided to name him Junior and take him back to Canada.

Junior was about 10 weeks old, and seemed remarkably laid back. When my wife picked him up, he lay purring in her arms. Nothing seemed to bother him. I tried carrying him around the field, exposing him to other people and some dogs. Junior purred through it all. As cats went, he was a veritable surfer dude. Maybe the trip to Toronto would go better than my previous cat transportation efforts. At least it couldn't be worse – could it?

The day before departure, we loaded our Prius test car with a full set of cat equipment: a pair of stainless steel food bowls in a tip-proof stand, an igloo-shaped litter box, cat toys, three packages of wet wipes, two different kinds of dry cat food, plastic bags and a towel to line the luggage compartment. Our car was now a pet shelter on wheels.

The next morning, we picked up Junior in the landing field, a green expanse that was the only reality he'd ever known. He jumped into the car without fuss, and we were off. Half an hour later, we were northbound on Interstate 75, amazed at how well things were going. Junior gazed out the windows and explored the aft compartment. My wife was already in love with Junior, and he'd be a perfect brother for Tyrone – except for Junior's little white mustache, the two of them were nearly identical.

Then came the first sign of trouble – a bleating sound that reminded me of a damaged bagpipe. It was emerging from Junior's chest cavity. His calm was ending, replaced by rising feline hysteria. Then the full-on howling began. The sound went from bagpipe to air raid siren.

We tried to ignore it, but the tone penetrated our skulls like an acoustic drill bit. My wife tried holding Junior and stroking him, but the purring kitten we had known was gone, replaced by a howling demon.

I should have known better – feline contentment is one of the most fragile states in the universe, collapsing at the mere hint of discomfort, change or provocation. And now we were out on I-75, the point of no return.

The trip down from Toronto (with no cat) had been a delight. The Prius is an exceptionally pleasant highway car, with a quiet hybrid powertrain and a streamlined shape that cuts smoothly through the air. Now the car was an auditory torture chamber, filled with the soul-destroying screeching of a cat removed from its accustomed environment.

My wife and I stared ahead and focused on the road. It was going to be a long trip. My teeth were on edge, and I had a headache that no medication could touch.

Then the car fell silent. Junior was asleep on my wife's lap, worn out by his epic sound production. His paws twitched as he dreamed a cat dream – he was probably envisioning the lost green world of the landing field where he had spent the first weeks of his life. I knew the peace wouldn't last. When Junior woke up, he would confront the new reality – a moving steel box and a grey stripe of highway. And the howling would recommence.

But it didn't. Junior woke up about an hour later and started purring again. My wife held him on her lap, then put him in the back so he could eat some food. No cat of mine had ever eaten in a moving car, but Junior wolfed down kitten food like there was no tomorrow.

And that was it. We had a travelling cat on our hands. Junior looked out the windows, played with his toys in the rear compartment and dozed in our laps. That night, we snuck him into the hotel by burying his container under our suitcases (we weren't sure if cats were allowed.) The hotel room became Junior's instant playground – he used the two beds as trampolines, leaping between them like a Cirque de Soleil performer. He ate his food, then fell asleep on the pillow next to my wife.

The next day was the same. The only sound that came out of Junior was purring. He stared out the windows, walked around the car, and enjoyed the road. He tried curling up in my driver's side foot well a few times, but I had to shoo him out – I kept remembering the reader who crashed because the cat was under the brake pedal.

My years of travelling with cats had left me gun-shy. I'd been clawed and howled at enough to last me a lifetime, and my wife has never really forgiven me for losing that cat in Northern Ontario, even though it happened long before she met me. But how can you win when you travel with a cat? Dogs are born travellers, designed to loll their heads out the window and chase the open road. Cats are living, fur-covered neuroses, pathologically incapable of change – even a different brand of food or cat litter can set them off, let alone a moving vehicle and a new world.

And yet now I have a travelling cat – my lifelong dream of a cat that drives with me came true. (Whether it lasts is another matter – Junior is a cat, after all.) But I'm hoping for the best.

And Junior does have a special provenance – he's named after Junior Johnson, the legendary moonshine runner and stock-car racer. (Johnson is one of my lifelong heroes, and I got to spend some time with him in North Carolina this spring.) So when it came time to name a cat with southern roots and a road trip ahead of him, the choice was clear.

Here's to you, Junior, and to many more road trips together. Let's pretend you're a dog. Why not? There have been stranger things. And you are a southern boy. 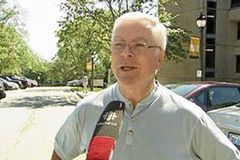 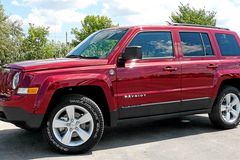 Driving the electric Volt in the real world
May 3, 2018 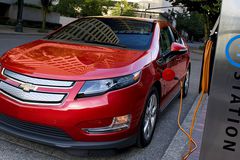