At a recent dinner party, everyone agreed the best thing about electric vehicles is that you never have to pay for fuel. You just go to those public stations and recharge for free and in a few minutes you're on your way . But is it really that simple? Is it really free? What other costs are there? — Vince, Toronto

There's no charge for charging at most public stations — but an hour's charge while you're having a Booster Juice at the mall might only get you 30 km worth of juice for your ride.

"The majority, over 80 per cent, are so-called no fee," says Ron Groves, manager of outreach and education for Plug 'n Drive, a pro-EV non-profit. "I don't want to say no charge because that doesn't make sense when you're trying to charge a car."

There are three types of charging for plug-in electric vehicles (EVs). Level 1 charging is done with a normal plug — the same as your toaster's — in a standard 120 volt wall outlet. It's slow.

Then there's level 2. It's 240 volts and needs a special charging station.

"You cut the charging time by 4/5, so instead of 18 hours to charge the battery on a level 1, it's only 5 hours on a level 2," Groves says. "Where you're mostly wanting to charge is at home, so every morning you wake up with full battery and full amount of range."

We'll get to level 3 a little later. There are 2700 chargers in Canada, Groves says. Modern level 2 public chargers cost as much as $5,000 each. They're usually part of a network, like Sun Country Highway, VERnetwork, or ChargePoint.

Some charge by the hour — there are reports of some in Montreal costing $1 an hour — but the bulk are paid for by the business who installed them. At least for now, that is. But that could change.

"That's being done to encourage early adopters and it also puts a sort of green halo around the business," says Groves. "They're being put in places where people will go and spend time and money — so it'll cost the mall a few pennies of electricity, you'll go into the mall and buy $300 in clothes."

"In four short years of sales, there are 14,500 EVs in Canada," Groves says. "The majority are in B.C., Ontario and Quebec, which also happens to be where there are incentive programs in place."

But most EV owners typically charge at home 86 per cent of the time. They use public chargers for top ups or while on trips, says Charlotte Argue, Assistant Manager, Climate Change & Air Quality Program at the Fraser Basin Council and spokesperson for Plug in BC.

"Individuals can either use a regular outlet or install a 240 volt charging station at home — same as their dryer outlet," Argue says. "A home charging station costs between $800 - $2,000."

"A rule of thumb is the cost to fuel an electric car is about an eighth of the cost of a gas-equivalent vehicle," Argue says.

The cost difference depends on local electricity and gas prices — and who's calculating it. It cost $2.25 to drive 100 km in a BMW i3, Groves says. When gas was $1 per litre, it would cost a comparable gas-powered vehicle $13.79 to go that same distance.

"The cost in most cases is considerably less expensive than running a gas car, not to mention that there's more stability with the price of electricity versus the price of gas, which tends to fluctuate," says Gabe Shenhar, Program Manager, Vehicle Dynamics and Consumer Reports magazine.

With an EV, you're eliminating some maintenance fees too, Shenhar says.

That range is even shorter when it's cold outside and you're using extra juice to heat the interior.

You can stop for a refill, but it would take 4-6 hours for a full charge with a level 2 charger.

This is where level 3 chargers come in. Also known as DC fast chargers or quick chargers, they deliver electricity faster, says Groves.

"If I want to drive from Toronto to Niagara Falls, I can't make it there on one charge, so I'd need to stop for a few minutes at a DC quick charger," says Groves. "So I can stop, and in 25 minutes or less — time for a Tim's and a tinkle — I can put an 80 per cent charge on my battery."

Right now, there are only quick chargers in B.C., Ontario and Quebec — with one in Nova Scotia, Groves says. There aren't many — in Ontario there are 5. More are being installed, but more are needed, Groves says. Tesla has its own network of Super Chargers, but they're just for Teslas. Oh, and they're free for Tesla owners.

In Ontario, users are typically charged $5-7 for a quick charge session, Groves says. In B.C.'s pilot project, it's a minimum of $2 per session.

"When the technology is changing rapidly, the best idea is to lease these vehicles," says Consumer Reports' Shenhar. "There are a lot of lease deals and you don't have to worry about a car with unknown depreciation, or problems with the lithium-ion battery degrading and losing range over time."

Correction: In the B.C. example, at $0.1 per kilowatt-hour, the EV costs $0.016 per kilometre, not 18 cents as was originally stated in the article.

Is there an insurance discount for winter tires?
October 20, 2015 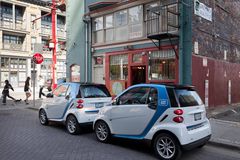