Lorraine Sommerfeld is hypermiling her way across Canada: aiming to drive across the country on six tanks of gas. Get the full story by clicking here and follow her progress with daily updates on this site and via Twitter @Globe_Drive

Day Seven was the beginning of the hard driving. From Toronto to Wawa, Ont. we logged nearly 1,200 km. The dream for this kind of driving? Four-lane highways. Once you leave a couple of lanes behind north of Parry Sound, it gets trickier.

The biggest waste of fuel occurs from a standing start. The more gradually you accelerate, the less waste. Thing is, you get accustomed to those bursts of gas to rejoin the highway after a rest stop, or to get to the crest of a hill at speed. With some practice, you can begin to regulate the flow of fuel while increasing your speed. Visually, keeping an eye on the litres per 100 km readout and the speed, you start to push them apart like a wishbone. It may sound crazy, or impossible, but it soon becomes a challenge. Your throttle control is feathered, your vision remains high; best of all, you start working in tandem with your car. I'm actually surprised at the level of engagement that results with an automatic transmission.

We don't speed. Everybody, basically, speeds. We fit in well with the big rigs, also calculating the perfect moment to start feeding fuel to maximize momentum without matting it. While we are making good numbers (well under the manufacturer's posted consumption), I'm still not comfortable if my speed drops to what I consider a nuisance level. If nobody is around, 80km/hr is a pretty pleasant speed through northern Ontario, especially as Lake Superior follows you for kilometre after kilometre. I keep a steady eye to the rear, however, prepared to compromise some of my hard-fought numbers to avoid being at the head of a dreaded chain.

A day at the Eco Wheels Show on Saturday revealed some eye-opening numbers from the Taylors. Those roof racks you barely notice? They're costing you up to 25 per cent, depending on style and what you have on them. Don't use your car as a storage space. Tires under inflated? That's another 3 per cent if tires are 1 psi down. I've mentioned the air conditioning; up to a third of your fuel efficiency can be wasted on full blast. A compromise will save you money.

Yet still, it remains the smoothness of our starts and stops, and sticking to the speed limit, or just under (when possible), that seems to be nudging our numbers down to what I believe will be a pretty remarkable number on the finish line.

Wawa, Ontario has spectacular sunrises. They start around 5am. I know this because we were already on the road.

Northern Ontario had provided a great road for learning to carry momentum up hills, using turns in the road to bank even more. It's become obvious why mileage numbers spike in the city: braking, stopping, starting and even parking causes the fuel consumption number to lunge. In the diesel Touaregs we're using as support, coming off a light, even with a light foot, can jump the litres/100 km number to 40 or higher. It quickly settles back to 10 or 11 – but wait for another light, and here we go again. I'll post the Touareg numbers as well; one is following directly in the footsteps of the Passat, the other skipping ahead for photography and errands. It'll be interesting to compare the heavier-but-diesel vehicles to the smaller-but-gas sedan.

All vehicles have a sweet spot for the best fuel consumption. Most people will find it's around 80 or 90km/hr, depending on the car and driver. And the conditions. It's those conditions that threw a wrench into the works in Saskatchewan. Torrential rain and devilish headwinds, that true mark of the prairies, grabbed at the car.

The roads are excellent for something like our Smarter Driver Challenge. Widely divided four-lane highways, vast sweeping eye lines and flat farmland. Traffic was light, and you really could pick your speed inside the posted 110km/hr. But our test is to be the most efficient, and as the wind gusted, I watched my numbers fluctuate regardless of a steady throttle. Tailwinds are ideal; it's why the flight from Vancouver to Toronto is shorter than the flight from Toronto to Vancouver.

My one ongoing niggle with the drive became more apparent. I'm not interested in being a danger on the roads. I do not care to drive ridiculously slow, and won't. The goal may be to establish a world record – and progress is excellent– but like most extremes, a reasonable compromise is the most realistic solution. I'm part of a team; our individual numbers are pooled. So I decided to become better at the key components of attaining greater efficiency (throttle control, vision and smooth driving) to ensure that if I kept to the higher speeds that I preferred, it wouldn't compromise the others. It's doable. It's hard work on a trip like this one (which we all understand is outside 'normal' boundaries) but it's doable. I'm doing it.

I ended up driving just outside the worn tire tracks on the Trans Canada through parts of Saskatchewan. As water settled into the asphalt ruts, it grabbed at the tires significantly. Often when a driver moves over, it can be fatigue. Any driver showing the first hint of being tired is yanked for safety; John Taylor, piloting the Touareg behind me, instantly knew what I was doing.

You start paying more attention to slight changes like this, and when it's safe to do so, tiny variations to your driving can yield noticeable efficiency gains.

Correction: An earlier online version of this story contained incorrect distance figures. This has been amended. 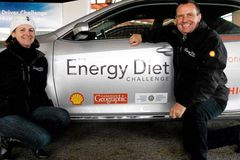 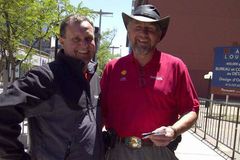 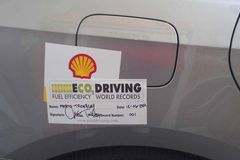 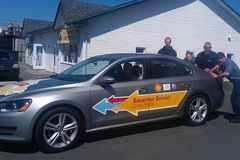 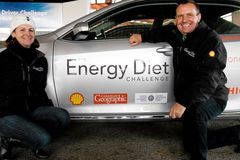 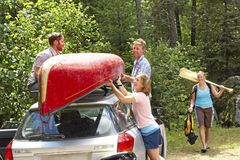 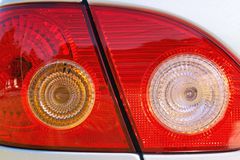