The best cars for student are… Sorry. What's that you said? Students don't need cars? It's a luxury they can't afford?

I hear you. Students should rightly live hand-to-mouth, watching their pennies, learning to make do on mac-and-cheese with tinned tuna. If they need to get somewhere, they can ride a bike, or take transit, or carpool or bum rides from their parents and friends, or in extreme cases, rent a car by the minute from Car2Go or some such thing.

Except that's not necessarily true. Take my student/son. He's 20, going into third year and he lives off campus in a house with three other students. Sure, he's on a bus line and takes it to school. No car required. Saves parking in a lot that is miles from the main campus. But here's the deal: he works across town and over a bridge as a lifeguard and swim teacher/coach. That's a twice-weekly commute that by bus takes 90 minutes. But in his little pickup, 30 minutes.

He also plays hockey and lugging his gear to games on the bus really is a non-starter – especially coming home with the gear all stinky and sweaty. And he skis, which also calls for a car to get to the mountains.

Point is, plenty of students – not just mine – have use for a regular ride.

To narrow the field of choices, here we have ranked 10 new small cars that you should be able to get for less than $20,000, most below $15,000 with discounts and hard dealing. Very straightforward and the numbers should shock you in a good way.

Option 3 falls in between Option 1 and Option 2: get a newer used car. Something safe and for less than $10,000. We've put together a list of 10 cars that fit the bill there. We haven't ranked them, but we have dug into details about safety and pricing – the latter based on Canadian Black Book's used car asking price database.

No one can guarantee that any used car will turn out to be a gem, but we like these 10 for good reasons. Most important of all, they're safe. In testing by the Insurance Institute for Highway Safety, each and every one earned "good" ratings in tests for moderate overlap front impacts, side impacts, roof strength and head restraints. Still, before you buy any used vehicle, spend $150-$200 on a thorough mechanical inspection by a qualified technician.

Good luck and here's an early toast to an on-time graduation. 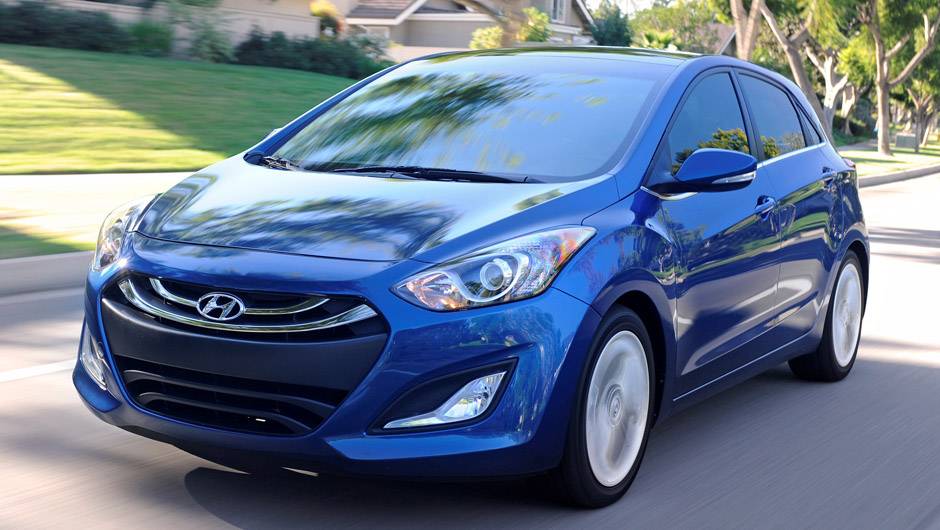 Safety: The IIHS rates the Elantra a Top Safety Pick. Standard are air bags all around, including a knee bag for the driver, along with anti-lock braking.

Reliability: The Elantra won its class in the latest J.D. Power and Associates Initial Quality Study, besting the Toyota Corolla and Honda Civic. Consumer Reports say reliability is fine, though not quite a match for the Corolla and Civic.

Test score: This four-door hatchback looks good, handles with the better cars in the segment, has surprising back-seat room and the modern, 173-horsepower four-cylinder engine gets good fuel economy. A student car to take the kid through graduate school and beyond. 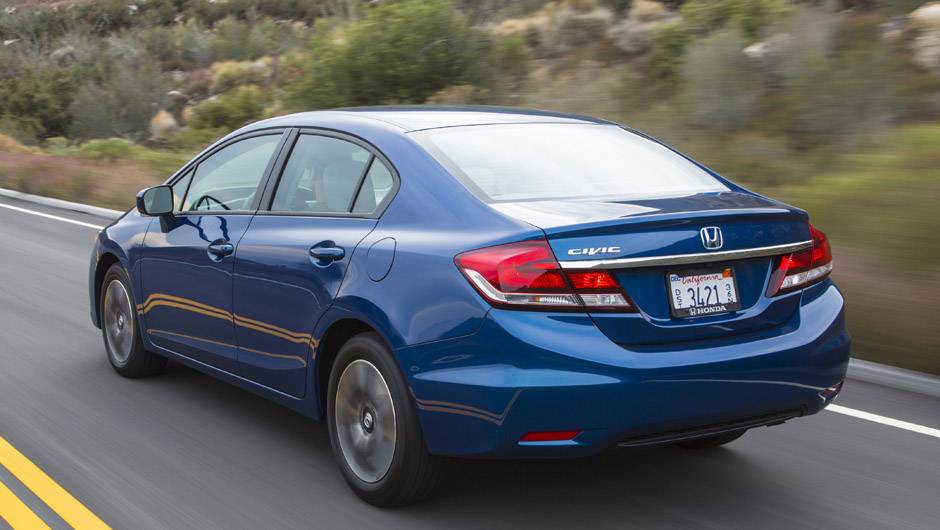 Safety: The Civic is an IIHS Top Safety Pick +. Small cars don’t get safer than this.

Reliability: Pick a research study, and the Civic is a stand-out. J.D. Power and Associates’ long-term Vehicle Dependability Study has the Civic in the top three in its class (tied with the Corolla and just behind Chevrolet’s Volt).

Price/deal: The least expensive Civic sedan starts at $15,690, but if you choose to lease – not necessarily a bad idea with students on a tight budget who want a lower monthly payment – then Honda will throw you $1,075 in a factory-to-consumer rebate and at 0.99 per cent for 24-54 months.

Test score: The Civic is a superb all-around small car and at this lease rate, it’s a deal, too. It’s reliable, thrifty, roomy and comfortable. The two-level instrument readouts are a love-it-or-hate-it feature, but there is lots here for everyone to love, period. 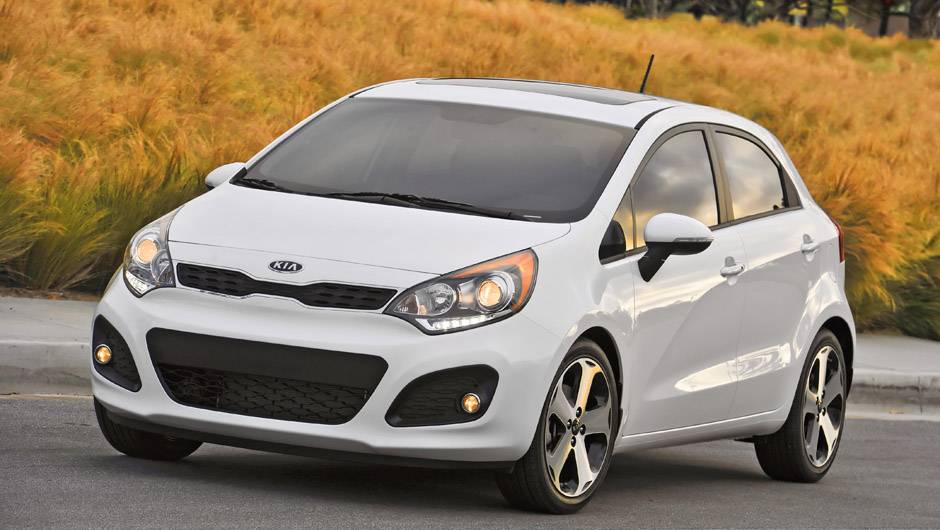 Safety: The Rio is not an IIHS Top Safety Pick but it had good rating for head restraints, seats, roof strength and the moderate front overlap crash test. Lots of air bags, anti-lock braking and even a standard immobilizer.

Reliability: The Rio ranked just below the Honda Fit among subcompact cars in J.D. Power and Associates Vehicle Dependability Study.

Test score: Kia offers both a sedan and four-door hatchback version of the Rio, and you want the hatch. Totally functional and quite a handsome design for a subcompact, too. The Rio may be a little noisy at highway speeds, but you’ll overlook that thanks to a powerful and modern, 138-horsepower four-cylinder engine that gets very good fuel economy. 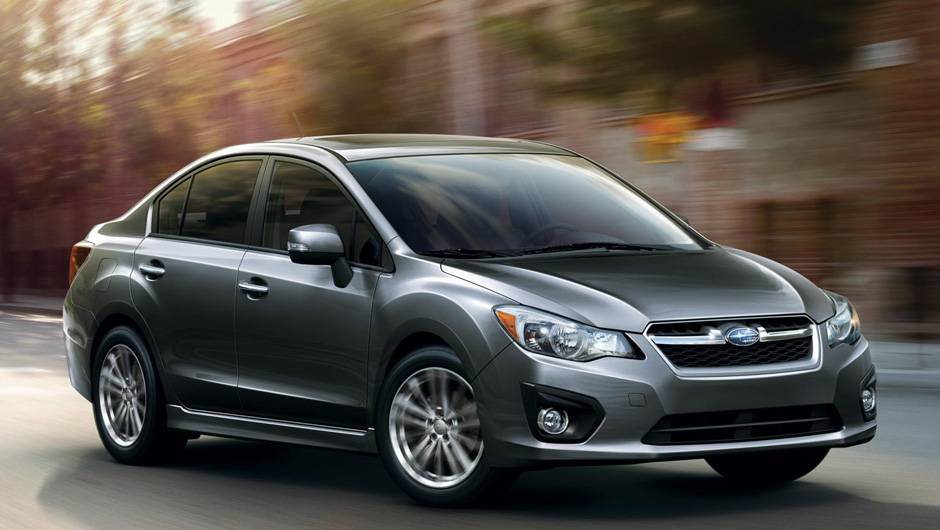 Safety: The IIHS rates the Impreza a Top Safety Pick, as has been the case for all Subaru vehicles for years and years.

Reliability: Bullet-proof. You will grow sick of this car before it breaks down and fails you.

Price/deal: The least expensive four-door hatchback model starts at $20,895 – minus the $1,500 factory discount on the table, however.

Test score: The Impreza is not the prettiest of cars and the cabin is not the most stylish among compact cars, but the mechanical bits and pieces are outstanding. All-wheel drive is standard and the low-sitting boxer engine is positioned just right for excellent handling. The ride is comfy, though noisy and given it’s AWD, the fuel economy is quite impressive. 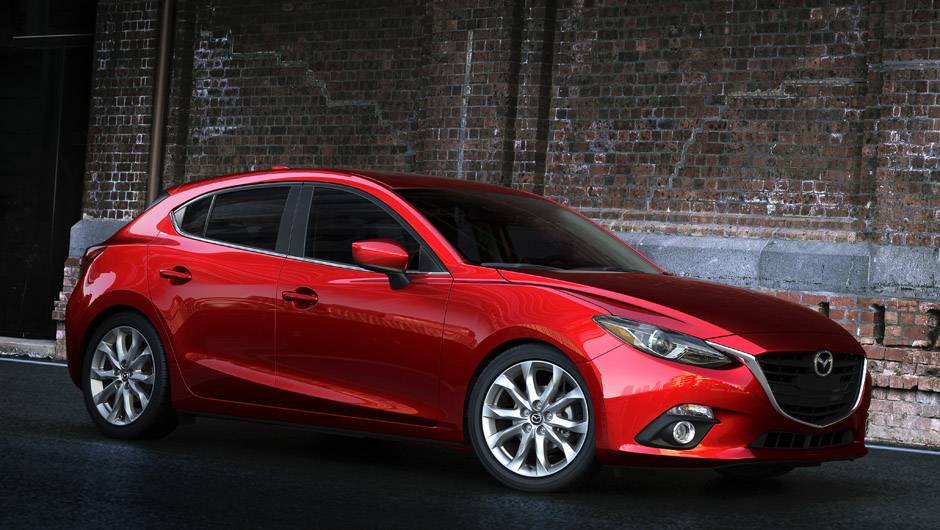 Reliability: Above average reliability, for sure.

Test score: If you value an entertaining-to-drive yet very fuel efficient small hatchback, then you need to test the Mazda3 Sport. The manual gearbox is very likely the best in its class and the steering precision is also outstanding. Inside, the control and instrument layout is first-rate. Seat comfort and support are only so-so. 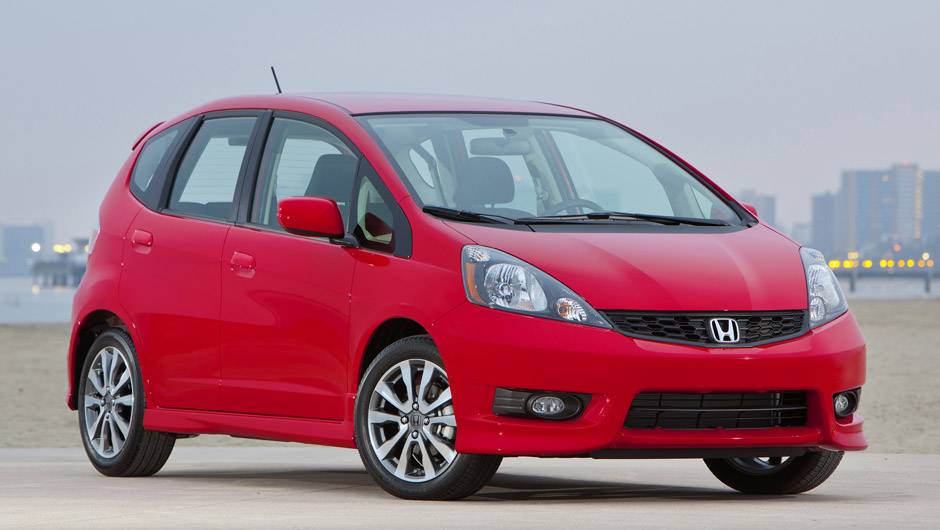 Safety: Honda is in the very early stages of launching the all-new 2015 version of the Fit. It’s been rated a Top Safety Pick by the IIHS, though the 2013 was rated “poor” in the small overlap front crash test.

Test score: You cannot buy a more versatile small car. You simply cannot. The Fit, now made in Mexico, is a remarkable small car, what with its many seating configurations. Find an outgoing version or wait for the well-priced 2015. 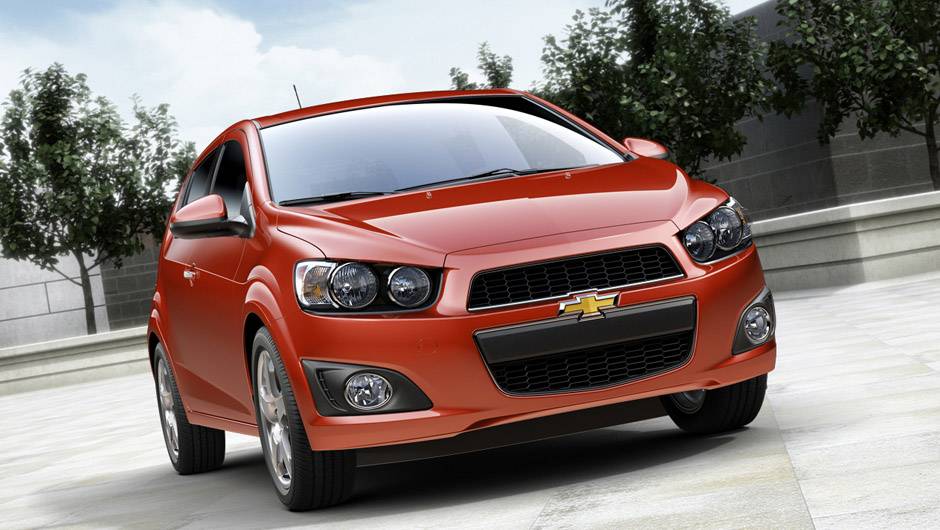 Reliability: Average. Not best-in-class, but not a dog, either.

Test score: You might be surprised by the Sonic. It is quick and quite entertaining and the cabin is well done, though seat support and comfort are not any better than average. The exterior design is a standout. 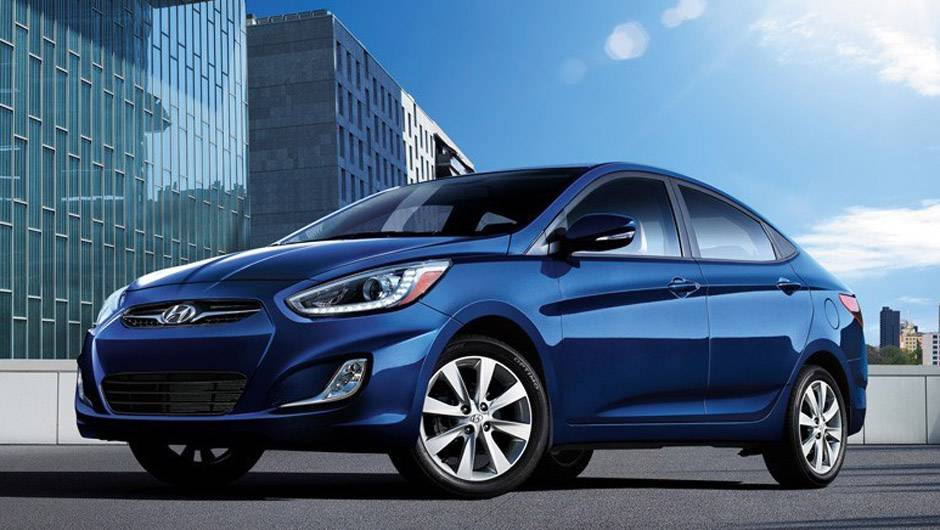 Safety: The Accent earned a “poor” rating in the IIHS’s small overlap front test and only an “acceptable” mark for side impacts.

Reliability: The Accent won its class in J.D. Power’s IQS and Consumer Reports rates it above average for reliability, too.

Test score: The Accent has remained essentially unchanged for several years now and really is ready for a proper update. The exterior design, however, is a winner, and the modern engine is both strong and fuel efficient. You’ll like driving this little car. The cabin layout and execution is very good. 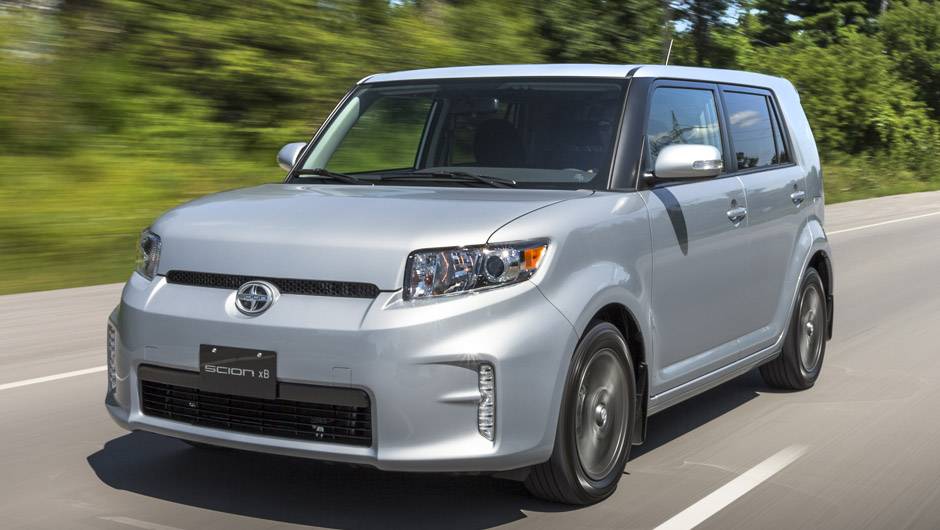 Safety: A “moderate” score in the IIHS’s small overlap test prevents the xB from being Top Safety Pick.

Test score: The xB is the box-on-wheels for people who hate cars with good looks but value extreme utility. That’s the xB – extremely useful. There’s enough headroom here for Lebron James and there’s almost enough space in back to carry all his money. 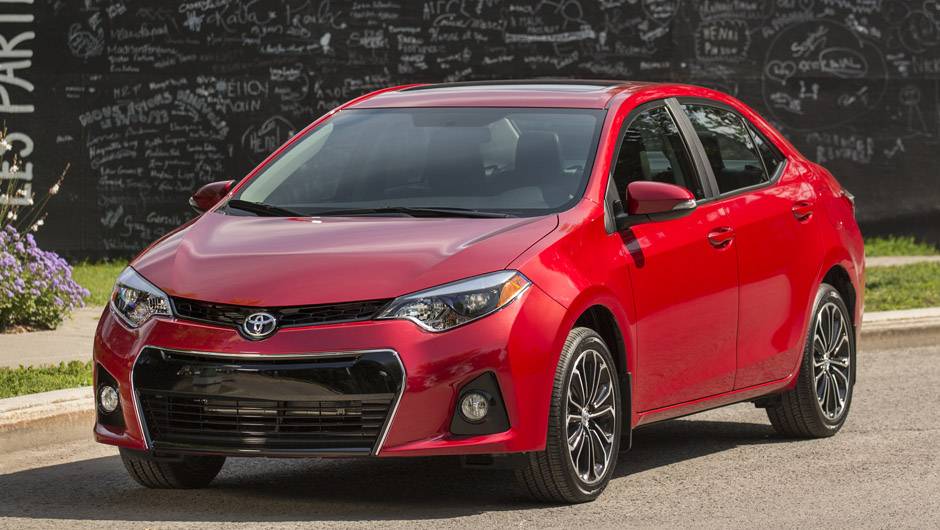 Safety: A Top Safety Pick of the IIHS

Reliability: The best-selling nameplate in the history of automobiles has long been valued for its reliability and durability. Those benefits show up in third-party research.

Price/deal: The base price for this sedan is $15,995, but Toyota Canada has a number of offers available that when combined can reduce the final price by as much as $1,600. Finance and lease rates go as low as 0.90 per cent.

Test score: Toyota updated the Corolla recently and it’s certainly a nice design from the outside. Road noise is under control, too. But the Corolla is not among the more entertaining cars to drive. But it’s a safe choice, no doubt.