Olympian Martin Reader has ditched his beach attire for a more professional look.

For seven years, he was part of Volleyball Canada's national beach volleyball team. He represented Canada at the 2012 London Olympic Games, where he and teammate Josh Binstock reached the round of 16.

Reader retired earlier this year, but he's still active in the sports community as a trainer and motivational speaker. To get to work, he drives a performance-oriented ride: a 2008 BMW 328xi coupe.

Why did you get a BMW?

To be honest, it found me. I didn't think I was in a position in life to get a BMW at this point in time. But it came up on my radar. I found it online. I did a whole bunch of searching and there was a dealer that facilitated it. He did a great job of convincing me to step into the car.

I'm a salesman's dream. I can really justify anything if I put my mind to it. I was eager to get it. With all the details he gave me about the car, it was too nice to pass up. I made a commitment to put the extra work into it to get it just because I believe the payoff in terms of having a BMW is that much more.

But most Olympic athletes don't make much money – how could you afford it?

I recently retired so it really helped facilitate the step out of beach volleyball and into the business world. I purchased it used in December. I haven't had it for very long at all.

I don't really know. I'm not going to pretend like I know what I'm talking about.

The car is probably smarter than I am – I'll leave it at that. It has so many systems in place. I just took it for a check-up. I handed them my key and they dealt with everything. It tells me if I need to bring it in. It's got a brain of its own. It's fantastic.

To be honest, the only downfall is because it's a sporty car it sits quite low. I got to get real low to get into it. Honestly, it's a small sacrifice to make considering it's a great vehicle.

But one thing I do absolutely love is it hands me my seatbelt. It's one of those things when you get out of training and you have sore shoulders or you're wearing a suit and your shirt is tucked in, it just hands you your seatbelt perfectly so I'm not dislocating my shoulders to reach back to grab the belt.

But you're 6-foot-7, can you fit inside comfortably?

Yes. It's fantastic. Because it's a two-door I can slide the seat all the way back and my head will touch the ceiling, but there's a sunroof so my head sits perfectly up there.

In terms of driving and comfort I've taken a couple of road trips and it's been fantastic. It's probably the best vehicle I've ever had in terms of space for me.

So you can't have any passengers in the backseat?

I would have to sacrifice my personal knee space for someone to sit behind me.

But I've had four people in the car fairly comfortably and we've driven up north to Muskoka in it and it was great. … I've driven to Montreal twice. It has all-wheel drive and it was fantastic. The mileage on the highway is superb, especially comparing it to 4WD.

What does a BMW 3-Series coupe say about you?

It begs me to drive it really aggressively, shall I say. Nothing illegal by any means, but it allows me to get to anyplace quite efficiently. Probably turn the stereo system down as well. It has a fantastic stereo so I get to play my favourite music all of the time."

Absolutely I sing behind the wheel. Windows aren't tinted so people get full disclosure and I'm okay with that.

Yes. But that being said, I had an amazing driving experience with the BMW Performance Driving School a few weeks ago.

I got to drive some 2012 335i [models] and I left it all on the tarmac and had a great time. It was an amazing experience where I got to really see what BMWs are made off. I now realize I'll leave my aggressive driving to the tarmac in a closed and safe environment.

The first car I purchased was in high school in Grade 11. It was a Dodge Diplomat. It was about 350 bucks. But it was freedom.

I'm from Vancouver Island and we lived out in the bushes. For me, having my own vehicle was key to my freedom. It felt amazing. I could do any activity I wanted. It was ultimate freedom.

But it let me down multiple times. Luckily, my dad is handy with vehicles. The ultimate demise of that was when I was driving from Kelowna to Vancouver in the summertime through the mountain highway. I was driving too quickly and I don't think I changed the oil. The engine overheated and essentially melted together. I just had to abandon the vehicle … and I had to bus to Vancouver.

I have driven the world's worst vehicles my whole life. I drove a K-Car Reliant that got me through college. That thing was just a beautiful car – not really, but it served its purpose. That was my surf-trip vehicle. It had great roof racks on it. Then I travelled the world playing pro for quite some time. I lived in Brazil and lived overseas so I didn't have a use for a vehicle. When I came back in 2007-2008, I got a Toyota Tacoma.

The worst would be my K-Car falling apart on a road trip – a couple of surf boards snapped the roof rack on a highway and there were surf boards scattered across the highway. And then someone locked my keys in the trunk and I had to pry open the trunk to get the keys, but the trunk never closed again. So I had to bungee cord the trunk – that was pretty tragic.

My best driving experience was the BMW driving school. I've never been able to push a car as hard as I wanted in a safe environment. I've always wanted to be a race-car driver, but seeing that I'm 6-foot-7 that's really not possible. I don't come from a situation to allow that to happen. I've been driving since the day I turned 16. I take my driving to heart and I've always enjoyed it. Going to BMW driving school, I got to push myself and I was totally surprised. 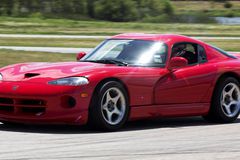 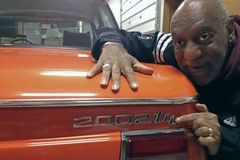 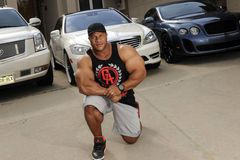 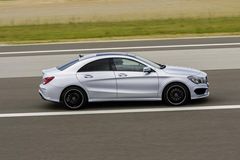 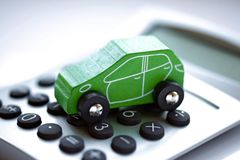 On the trail of another geezer pleaser vehicle
October 11, 2013 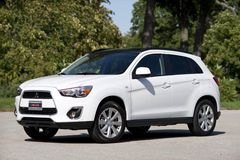