Economics has been called the dismal science. But if you want real misery, try demographics.

I thought of this the other day when I watched an older guy crawling out of his new Lamborghini, all eyes upon him.

The car was a rolling testament to the art of automotive design: low-slung, blood-red, thrumming with the virile energy of 12 high-tuned Italian cylinders. The owner, on the other hand, was a testament to the fleeting nature of human powers: Once upon a time, he may have looked like a star quarterback, but those days were long past – now he was stooped and wizened, with about two per cent of the hair that he'd possessed back in the day.

I knew his pain. The life of a car buff involves a cruel calculus – the cars get better, but we get worse.

The demographics of high-end car ownership reflect the strange irony of the universe – most people who own them are too old to suit the car.

What can you do? As a teenager, you dream about Ferraris and Porsches, but by the time you actually make enough money to buy one, you will probably be the human equivalent of a clapped-out Pontiac Sunfire. Yes, your dream car is going to outshine you – next to walking into a bar alongside George Clooney, it may be the worst enhancement decision you'll ever make.

Although we like to pretend that cars are nothing more than transportation devices, they are in fact much more. They serve as socioeconomic indicators, mechanical aphrodisiacs and display cases for the human being within. Unless you're Brad Pitt or Angelina Jolie, there's little chance you'll live up to the expectations created by the jewel case that is a new Maserati.

There is a human-to-automotive attractiveness ratio, and I've always believed that you and your car should be on approximately the same level. Ideally, you will be more attractive than your car. Unfortunately, this was never easy for me – and it gets harder every year.

When I was 17, I had a decrepit Fiat 600 that had about 30 horsepower, rusty fenders and a paint job that was applied in my parents' garage with a bunch of spray cans. I, on the other hand, was at the height of my powers. I could bench press more than my body weight back then, and clear six feet in the high jump. The Fiat was my automotive wingman – and I was better looking than it was. (Or at least less rusty and prone to coolant leakage.)

Now I have two ways to go – a nicer car, or a worse one. Of course, I'd like a better one. And in theory, I should get it. After 2-1/2 decades, my wife and I can see the light at the end of child rearing's long tunnel. We both have careers. Our house is renovated. We have a garage.

So I'd like a sports car, preferably a fast, great-handling convertible. But there is the ridiculousness factor to consider. My friend Cal (a true sage in matters relating to transportation) says no man over the age of 40 should be seen in a car without a top. "You're going to look like an idiot," he declared. "If you get a convertible, I'm not going in it."

I understood his thinking. Years ago, I attended a famous Atlanta strip club called the Cheetah Three (it was for research purposes). My abiding memory was of how sad most of the male customers looked. They lined the long stage, many of them in office suits, their white shirts glowing purple under the club's black lights. Most of them were overweight, and the glowing shirts made them look like a pod of radioactive manatees. The men looked ridiculous. And I was one of them.

Back to cars. I can't count the number of times that I've seen someone in a car that seemed completely and utterly inappropriate.

In North Carolina, I met a guy who must have weighed 300 pounds, yet he was driving a Lotus Exige, a car with a door opening the size a basement window. Watching him squeeze in and out of the Exige was like witnessing a walrus trying to fit itself into a phone booth.

On a Toronto freeway, I saw a guy with a hot-pink Dodge Neon decked out with neon tubes that spelled his name in glowing pink letters. There were more lights mounted on the frame, aimed down at the road – the car looked like it was floating on a moving cushion of pink candy floss.

And then there was the shrivelled-up guy with the brand-new Lamborghini last week.

Foolish? Of course. But who cares? These guys all liked their cars, and they came up with the money to pay for them. I may look just as ridiculous in a Miata or a convertible Porsche. But that doesn't matter to me any more.

There is a trajectory to the life of a car buff – as you fade, the cars shine. It's the way of automotive demographics, and of life itself. So when you see me in that convertible, go ahead and laugh. I won't mind. 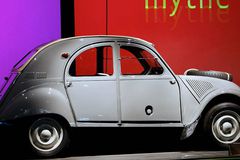 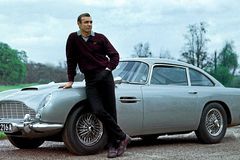 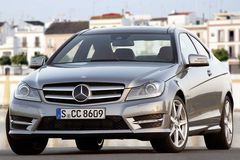 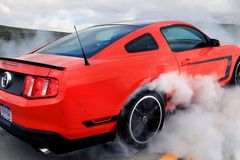