Has it really come to this?

Is it now necessary to tell people, "Don't watch entire television shows while you're driving your car on the highway?"

Are we past quick glances to check e-mails and sending covert texts? Are those out of date, so very "2010?" Are we now in the throes of the full-blown driving entertainment system experience? Should we have warnings on hand-held devices the same way we do on cigarette packs?

Do we need a sticker with a picture of a Honda Accord wrapped around a telephone pole accompanied by the words: "Warning: Operating a vehicle while watching television episodes may be harmful to your unborn infant because you're probably going to get into a car crash and die before you have any kids."

Do we need a snapshot of actor Michael C. Hall taking a knife to a minivan with "Caution: Do Not get too into the latest episode of Dexter while doing 110 km/h on the highway."

Perhaps a drawing of a Model T flying through the air toward the surf with: "Health Advisory: Watching Two and a Half Men while driving is dangerous and won't make it any more funny."

Last week, an Ontario man driving on Highway 15 near Kingston, Ont., was pulled over by the Ontario Provincial Police. He was having a tough time keeping his vehicle in its lane. When the OPP officer drew his cruiser up beside the driver, he saw that the 28-year-old had rigged up his smartphone above his steering wheel so he could watch an episode of the Canadian cop show Rookie Blue. Said TV buff was so engrossed he was oblivious to the police cruiser trying to flag him down.

The Ottawa Citizen quoted a statement from the OPP saying, "The driver was so intent on watching that he did not notice the police officer driving right beside him until the officer activated the emergency lights."

Really? He was so involved he didn't notice? When I'm driving, I am keenly aware of the presence of any law enforcement official. I automatically feel guilty every time I see a cop car even when I have done anything wrong. The driver was obviously a cop fan. He's so into Rookie Blue he couldn't wait to watch it at home.

If this is the first time a Canadian driver has been busted for indulging their TV addiction, we could write it off as a freak occurence. It isn't.

In 2010, a 35-year-old driver was arrested – again near Kingston (closer to the prison I guess) – for watching a TV he'd set in the passenger seat. In 2005, a 21-year-old Windsor woman was nabbed for watching a music video on the TV and DVD player she'd hooked up. It must have been a really excellent video, like Girls on Film, My Body is a Cage or Say, Say, Say; otherwise, she would have simply listened to the song. In South Korea, special fines have been set up, after a truck driver who was watching TV while driving killed three cyclists.

Had our Rookie Blue fan merely been talking or texting, he would have received a $155 fine. Who knows what he'll get for supporting Canadian television? Maybe this is a way to increase viewership of Canadian programming. We could have the CRTC pass a rule that forbids watching American and foreign TV shows in your car, but allows you to watch Canadian ones.

Some will say we need tougher laws to discourage television watching while behind the wheel. You could argue that anyone who thinks it's okay to watch a cop show while operating a motor vehicle is not fit to have a driver's licence. You could argue that this kind of person should lose their right to drive. Yet look how we treat drunk drivers. It's routine to hear of guys who have seven or eight convictions still driving around, a beer in one hand and a glass of rye in the other. We go nuts when someone handles a gun without a licence, but when someone risks other peoples' lives with a car, they get a slap on the wrist.

There have to be more pragmatic solutions. We can't beat them. Perhaps we should join them. We can start with the car makers.

Why not design windshields to look like enormous screens? We know people can't resist the urge to check e-mail and watch their favourite shows. Why not make them think they are actually watching TV? With a windshield that looks like a TV screen, we could tell motorists they are watching a fantastic new reality show called Drive. Billboards could serve as commercials. The show is so advanced and state of the art that it actually looks just like your commute.

Why not equip ambulances with Netflix? That way when a driver is put into the ambulance after causing an accident because he was watching TV, the paramedic can ask him, "What show were you watching?" – and then the injured motorist can spend their last moments on earth catching the final few minutes of that show that was so good they had to watch it while driving.

These are only a couple of suggestions to get the creative juices flowing. But the time has come to confront the elephant in the room – namely the TV set in on the dashboard.

The time has come, my friends. It's time to start thinking outside the box so we can always have our eyes glued to the idiot box. 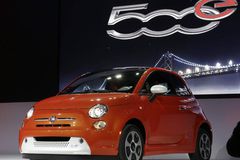 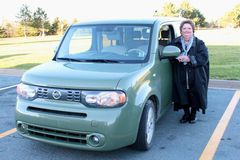 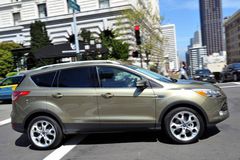 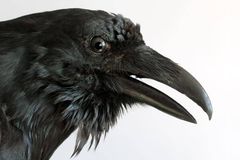 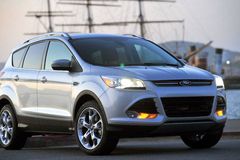 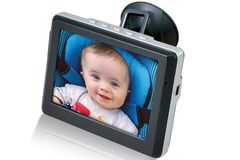