I'm dating a guy who drives an Audi TT convertible. As someone who usually rides the bus, I'll admit I was impressed at first. Then I found out it belonged to his ex-wife. He brags to his friends and anyone who will listen about scoring the car in the separation. A few more rides in it and I'll lose my sanity. He can't wait to drive it, and I dream about the day it gets stolen. Should I ask him to get rid of the car, or just get rid of him?

- Passed by the Past

Taking your ex-wife's Audi TT is like a boy stealing his sister's Cabbage Patch doll to get back at her. Now that he's got it, what's he gonna do with it? Any man who drinks whisky straight or enjoys chopping wood will tell you a drop-top TT is nothing to boast about. It's like a Miata, or a moped. Fun to drive - until your friends find out.

Audi certainly makes great automobiles. The R8? The sky's the limit with that car. But I don't know many men who want a TT, especially the rag top. Any chance you can convince Romeo to trade it? Maybe for a practical yet lightning-fast S4. Or even the A4, though popular with housewives, has more masculine qualities.

The TT was clearly designed with feminine appeal. Perhaps due to the price, the appeal is greatest to professional women -- those wearing three-piece pin-striped suits. Elegant for sure - but without the fedora, not untouchable. As usual, not everyone will agree with me. Some people claim the TT is a great work of art - and well, it did spend time on display at the Guggenheim.

Speaking of big displays, your boyfriend should have taken the flat-screen TV and left the TT with his ex. Then he'd have something to impress the guys with. Another thing - if he's bragging about his ex's car, he's probably not very far along the road to recovery.

To his credit, divorce is traumatic. A friend compares the end of his marriage to a death, and says it was like grieving the loss of a family member. If your guy and his ex have been separated for years, there's probably not much emotion left. But it doesn't seem like that's the case.

Though things may have ended on a sour note, as they often do, there was probably a lot of love at one time. To keep alive the hope of tying a dead relationship back together, it's common to hang onto things that belonged to the other person long after they're gone.

It sounds like your guy has transferred unresolved feelings to the car. Until he settles his issues, you'll be on an emotional ride with him. Do you feel like the trophy in the passenger seat right now? If so, you'll undoubtedly be the next ex. After a breakup, some people move quickly to find a new partner, long before they're ready.

Everyone has relationship history. We all know even if you turn the odometer back to zero, the miles are on the car. But in his case, there may be too much emotional baggage in the trunk.

If you're thinking long-term with this guy, and my suspicions are correct, think again. If it's just a fling, ride it out until you're ready to take the bus again. Maybe you know better -- maybe he's over his ex, and the car is simply bothering you in the same way his matrimonial bed would. But the bed he shared with his ex-wife isn't the same as the car he shared with her. Or at least for the sake of your sanity, it's best to assume so.

One solution is to borrow the roadster and leave it unlocked in the worst neighbourhood you can find. The bad news? Thieves are tired of the TT. It's off the list of the most stolen vehicles in Canada this year, and has been replaced by the Audi S4 Quattro four-door. But don't despair. With a $20 tip left on the dash, I'm sure someone will take it off your hands.

On second thought, before you tell him you're Auda-there, borrow the car and have some road-trip fun with a girlfriend. Make a Thelma and Louise day out of it, just skip the part where they drive off the cliff.

The smartest thing you can buy this winter
December 24, 2009 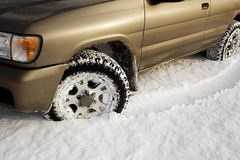