Vehicles from a family living down the street do not have current plate validation stickers. The worst one is a sticker that expired in December 2014. Are they insured? What if they crash into someone? These vehicles are used daily but when I inquired about this to a police officer, he said nothing could be done until they are caught driving on the road. Get your renewal sticker. I pay my taxes – everyone should. – Jean, Toronto.

If the stickerless cars are parked on the street, their owners could get stuck with a $30 fine.

"The City of Toronto requires that all vehicles parked on street must be properly licensed, including having a valid Ontario licence plate validation," said Anthony Fabrizi, Toronto manager of parking operations. "This fine, like all others have a provision for towing but generally speaking, towing only occurs during rush-hour periods or in cases where the vehicle is parked blocking vehicular or pedestrian traffic."

The cars could also be towed if they have three or more parking tickets that haven't been paid for more than 120 days.

You could rat out your neighbours by calling parking enforcement.

If they're on a private driveway, they're not breaking the law – until they leave it.

Local bylaws cover parking, but if you're driving a car with an expired sticker, you're breaking provincial law.

"Under Section 7 (1) (a) of the Ontario Highway Traffic Act (HTA), vehicles must have currently validated permit and number plates when being operated on a public roadway," said Bob Nichols, Transportation Ministry (MTO) in an e-mail.

That section says, "No person shall drive a motor vehicle on a highway unless, there exists a currently validated permit for the vehicle."

Hit the road with an expired sticker and you could face a $65 fine, before surcharges and fees.

In 2014, the most recent year with available numbers, 49,852 drivers were convicted under that section. And if you don't have insurance, it gets a lot steeper.

"The penalty for driving without valid automobile insurance, on first conviction will not be less than $5,000 and not more than $25,000," Nichols said.

And are cars without stickers insured? They might – or might not – be. The sticker isn't proof of insurance, although you need insurance to get it.

"I can only get the licence plate sticker renewed if I have valid insurance," said Pete Karageorgos, director of Ontario consumer and industry relations for the Insurance Bureau of Canada. "But, if I forgot to affix the new sticker on the plate, my policy is still valid."

That differs in provinces with government-run insurance. For example, in British Columbia, the sticker is proof of insurance.

"A vehicle is required to have a licence plate and valid insurance to be parked on the street," said Staff Sgt. Randy Fincham, Vancouver police spokesman.

Tinted licence plate covers look cool, but are they legal?
April 13, 2017
Are mobility scooters allowed on roads and bike lanes?
May 17, 2018 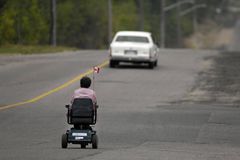