Canadians are a prudent people for the most part, except when it comes to outfitting vehicles with winter tires.

Data released last year by the Tire and Rubber Association of Canada showed about one in two motorists opt not to put on winter rubber, placing their faith in so-called all-season tires and their innately Canadian winter-driving skills. 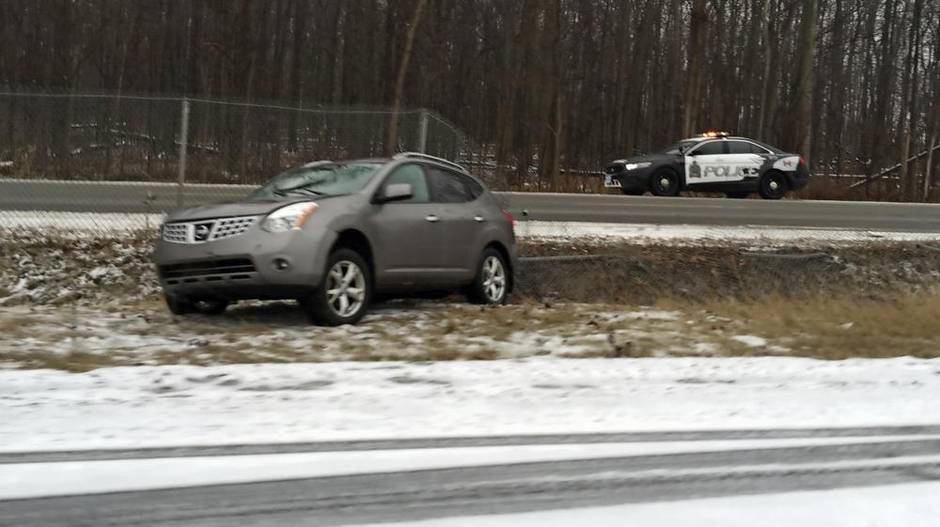 Some may relent after a sphincter-tightening experience in an early-winter snowstorm or bout of freezing rain. And, those who do have winter tires often wait until the last minute to put them on, joining the converts in a traffic jam at service centres.

Only in Quebec, where winter tires are required by law between Dec. 15 and March 15, is there a near-universal use of winter-rated tires. Other jurisdictions rely on dangling carrots and cajolery to get drivers to switch.

Manitoba Public Insurance offers up to a $2,000 low-interest loan to buy and install winter tires, while private insurers in Ontario offer small premium discounts. ICBC, British Columbia’s Crown auto insurer, says not having winter tires won’t void a motorist’s insurance if he or she has an accident, but could affect his or her liability if it’s found that having them would’ve helped. 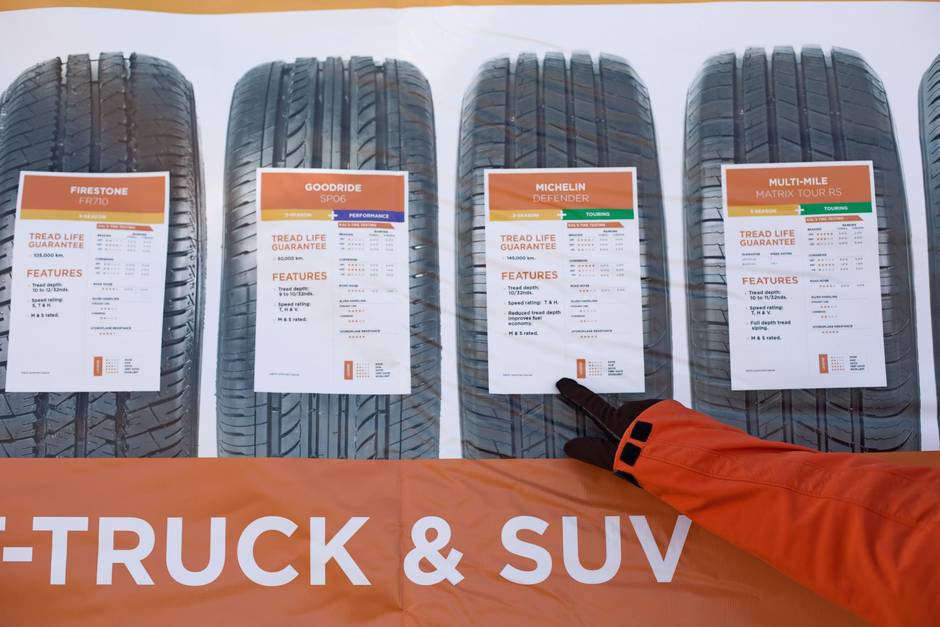 Tires and their specifications are displayed on a poster at a media demonstration of tire testing by Kal Tire in Edmonton, Alberta on Tuesday, October 27, 2015. (Amber Bracken for The Globe and Mail)

Trying to pick the right winter tire can be only slightly less stressful than buying the car itself. While a lot of retail tire websites contain customer reviews, they’re subjective and often contradictory.

Which makes Kal Tire’s new independent testing program all the more timely. The Vernon, B.C.-based tire retailer, which operates 250 stores in Western Canada and Ontario, issued its first set of results this fall on 19 car and light truck tires, including winter, all-season and all-weather types that it sells. 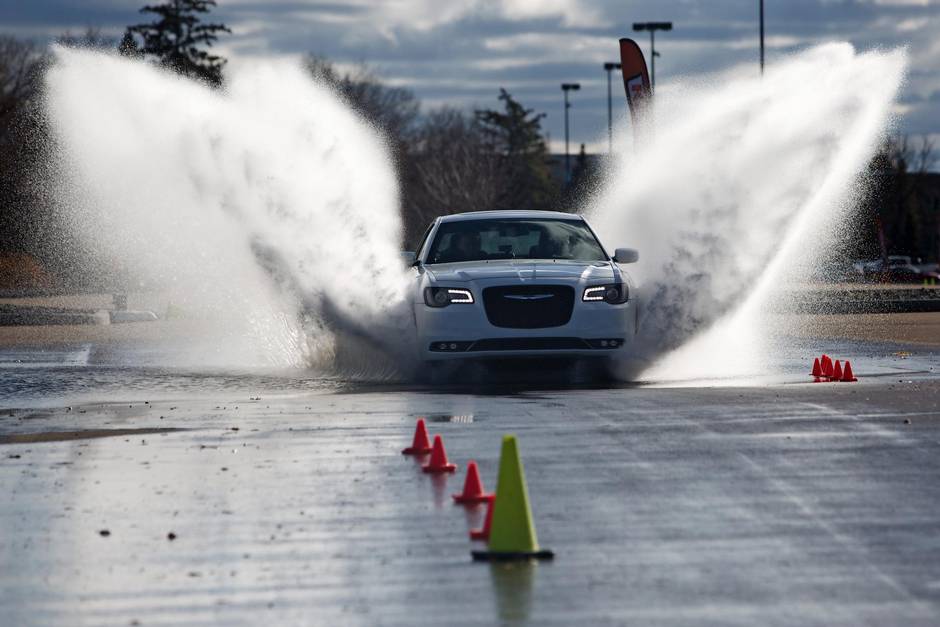 A driver runs a hydroplaning test during a media demonstration of tire testing by Kal Tire in Edmonton, Alberta on Tuesday, October 27, 2015. (Amber Bracken for The Globe and Mail)

“It’s hard for a customer to determine what the right buying decision should be,” says Brent Spruston, a Kal Tire zone manager. “We need to have some facts that we can present to customers, that are non-biased.”

Results from another 57 tires will be out next spring. Spruston says Kal Tire’s aim is to test all the tires it sells, including summer performance rubber. It is also considering testing worn tires to give consumers a better idea of what to expect after the new rubber wears off.

The testing regime was designed by Alan Sidorov, a Whistler, B.C.-based advanced-driving instructor who’d previously worked on vehicle development with BMW and Chrysler (including on the Viper), as well as several tire manufacturers.

“I was borrowing heavily from stuff I’d learned from Pirelli, Dunlop, Michelin, Bridgestone over the years,” says Sidorov. “Then it was a team effort with Kal Tire to determine what [it] felt were the most valuable bits of information, and a team effort with my drivers to decide how we’re going to do each one.” 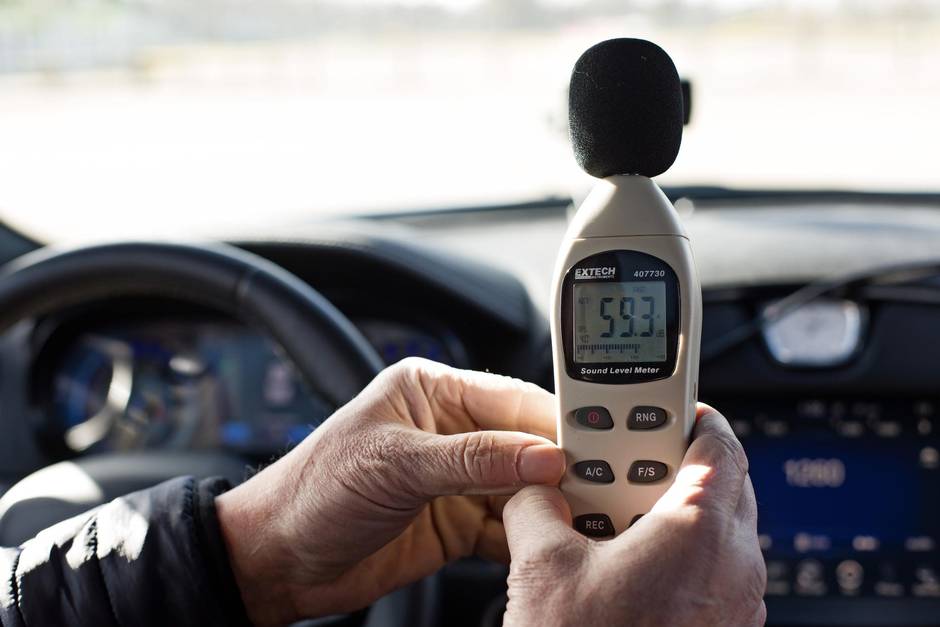 Alan Sidorov uses a decibel meter to test for road noise during a media demonstration of tire testing by Kal Tire in Edmonton, Alberta on Tuesday, October 27, 2015. (Amber Bracken for The Globe and Mail)

Testing was conducted in the winter and spring on three airport tarmacs and two ice-covered lakes, as well as public roads, to measure such things as tire noise. The 10 tests included wet, dry and ice braking, road-holding on a skid-pad under snowy, icy and slushy conditions, and the tires’ vulnerability to aquaplaning in standing water.

While Kal Tire says it is the only Canadian retailer to conduct such tests, it’s not the only source of independent Canadian test results. The Automobile Protection Association (APA), the Montreal-based consumer watchdog, recently issued its own winter-tire testing data. 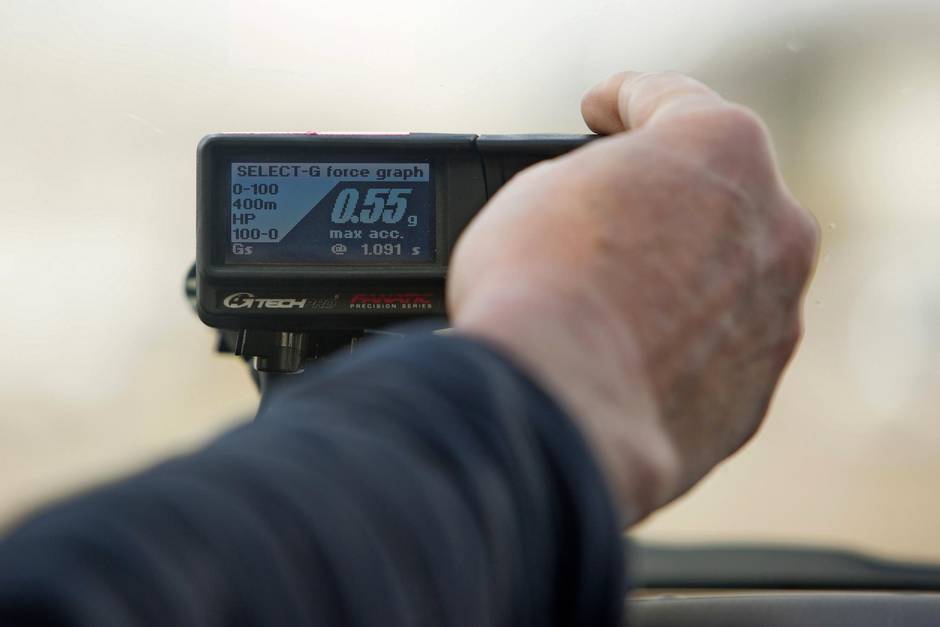 Alan Sidorov uses a GTech-Pro RR Fanatic during a media demonstration of tire testing by Kal Tire in Edmonton, Alberta on Tuesday, October 27, 2015. The device records elements of the vehicles performance. (Amber Bracken for The Globe and Mail)

Among winter tires, the Hakkapelitta R2 earns a top rating from both Kal Tire, which sells them, and the APA, which also gives top marks to the Bridgestone Blizzak WS80.

When it comes to all-season tires – or three-season tires, as Kal Tire likes to call them – Kal Tire recommends the Achilles 2233 for its combination of good performance at an affordable price. But that doesn’t extend to cold weather since, like every all-season tire, the rubber compound loses its grippy qualities at temperatures below 7 C. 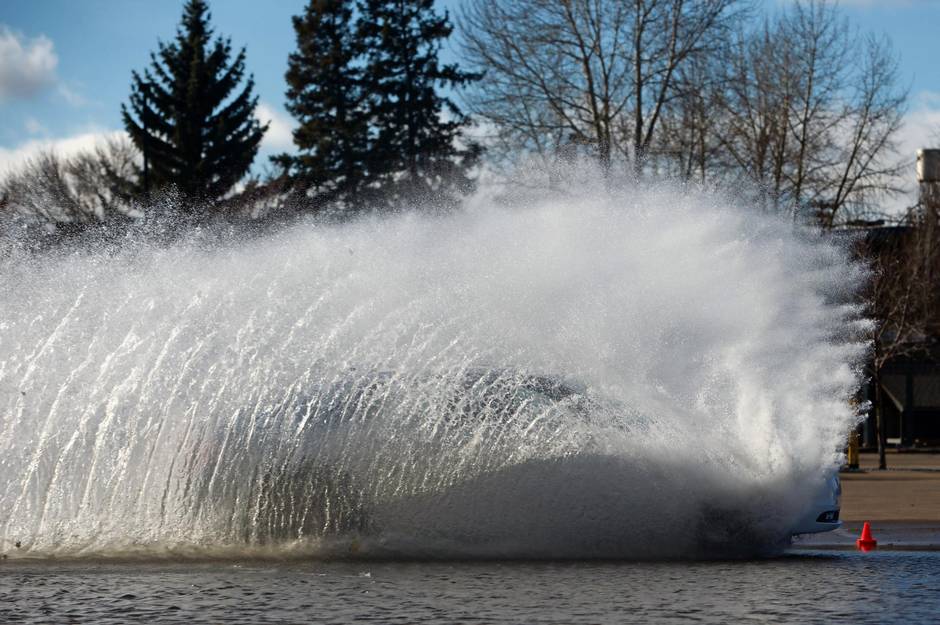 A driver runs a hydroplaning test during a media demonstration of tire testing by Kal Tire in Edmonton, Alberta on Tuesday, October 27, 2015. (Amber Bracken for The Globe and Mail)

Despite the name, all-seasons do not have an official winter rating, meaning they’re taboo on many highways. Likewise for many tires carrying a mud-and-snow rating.

All-weather tires are winter-rated but their rubber compounds include pulverized walnut shells or silica that increase tire life and offer motorists the convenience and cost-saving of not owning two sets of tires swapped every spring and fall.