Take, for example, the dozen luxury vehicles that were impounded by the Ontario Provincial Police on April 2. The drivers were charged with stunt driving, a violation of the Highway Traffic Act, which can include anything from popping wheelies to going 50 km/h over the speed limit. It comes with an automatic seven-day suspension, vehicle impoundment and, if convicted, up to $10,000 in fines and a 10-year licence suspension. In this case, a swarm of luxury cars were reported driving at high speeds on Highway 400 and intimidating other motorists. "That kind of aggressive driving (is) the leading cause of death and injury," said OPP Sergeant Kerry Schmidt. "We do not want people using highways as their little playground racetracks."

Among the vehicles confiscated were Porsches, Lamborghinis and Ferraris. A number of the drivers pulled over were members of a car club called North Face Rally, whose website declares, "Supercars and super people on the most extreme car enthusiast rally for the north. We are Canadian and we are proud. We drive our vehicles all year and throw the wildest parties."

It's this last part that had the media in a snit.

Normally, when you see idiots stunt driving on Highway 401, they're in a couple of souped-up Honda Civics trying to compensate for some glaring masculine shortcoming. North Face Rally, which quickly posted a statement condemning the incident, is a club for folks with really expensive sports cars who like to have a really good time. Translation: fast cars, bikini-clad women and the high life. The website's promo video looks like a cut scene from the series Entourage. Its members may also have shortcomings but, if they do, they probably don't care because they're too busy driving amazing cars and hobnobbing with bikini-clad women, a practice people in the 1980s called "treating my depression."

This makes many people hate them.

Of course, if you love cars and want to stunt drive, there are ways to do it legally and safely. "We call it precision driving, but stunt driving seems to sell better," says Hans Wolter, owner of Wings and Slicks, a Milton, Ont.-based driving school that offers courses such as "spin class" and "J-turn parallel parking." Wings and Slicks offers an entry-level class in a BMW 328 IS Coupe for $349 called "stunt driving 101."

Since the company opened in 2009, Wolter, who spent 10 years as a professional racer, has seen all types of drivers. "We get the big egos who don't think they have anything to learn and just want to pour out the testosterone, and we have the ladies who are timid about the vehicle. We cut down the ego and raise up the timid. The timid ladies tend to do better than the ego guys. They actually listen. It's funny to watch."

Sounds like an opportunity. We need to get more women into stunt driving. Most stunt drivers are men who overestimate their skill set. If there was a gender balance, then the dudes compensating with expensive cars and scantily clad consorts could meet female car enthusiasts who possess equal or better driving skills. They could still have luxury car rallies and events but, instead of women parading around in bikinis, the guys could stroll around in white T-shirts and beat-up jeans while carrying a carpenter's kit in one hand and a copy of Pride and Prejudice in the other.

It is a truth universally acknowledged, that a single man in possession of a Lamborghini Huracan Spyder, must be in want of a wife who knows how to drift and do the "Scandinavian flick."

In Britain, car appreciation is ingrained in their culture
March 27, 2017 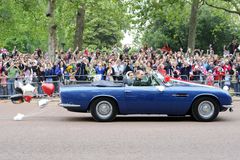 Dogs and cars mix, but most drivers hate the smell left behind
March 20, 2017
Inside the irritating minds of chronic ‘lane robbers’
March 13, 2017
Follow Andrew Clark on Twitter @aclarkcomedy
Report an error Editorial code of conduct
Due to technical reasons, we have temporarily removed commenting from our articles. We hope to have this fixed soon. Thank you for your patience. If you are looking to give feedback on our new site, please send it along to feedback@globeandmail.com. If you want to write a letter to the editor, please forward to letters@globeandmail.com.
Comments