Some of my memories from being an exchange student and working for Daimler-Benz in West Germany are a bit hazy – after all, it was 37 years ago. The company beer trolley lady might have had something to with it too. On my long-awaited return to the Mercedes plant in Sindelfingen near Stuttgart in mid-November, I ask if workers on the line are still served beer, and my young tour guide, Claudius, thinks I'm joking. But his older colleague Gaby laughs knowingly. "Ach so! Yah, in former times workers would drink beer, but that stopped in the early 1990s."

Back in the 1980s – when I was a 120-pound 19-year-old – my workmates who were leaving for their generous summer holidays would buy a beer for every person on our portion of the assembly line. While sparks flew about and Werkmeisters (line foremen) whizzed by on bicycles, I watched my world slowly move along on conveyors with a local Dinkelacker brew in my hand. There was also always a glass of subsidized suds available in the canteen at lunch or dinner. Cost: about 12 cents.

Times have changed. On my recent factory tour, with the scent of freshly ground steel bringing on new waves of nostalgia, I'm amazed to find that my entire initial chassis assembly line is now 100-per-cent operated by precise, laser-welding robots.

Daimler offers guided tours of the factory floor of the Sindelfingen plant, in English, free to the public Monday to Friday. (They're also very popular so don't show up without e-mailing ahead at visit50@daimler.com to reserve.) Antje, a group tour guide, noticing my fascination, reads my mind. "Manual welding is very seldom – it's not like in former times," she says, then adds, "Mercedes developed laser welding, but the future belongs to glue."

Farther along the line, I watch more robots expel exact lines of adhesive and imagine what a mess I would have made with a massive glue gun. Car bodies travel several kilometres just inside the body shop, while the engines come from Stuttgart or elsewhere. But the ultimate moment remains "the marriage." With laser accuracy, the body is slowly lowered from above while the chassis rises from below – until they meet like a meticulously fitting clam shell, with gaps measured in micrometres.

Mercedes's largest plant still employs roughly the same number of men and women that it did during my Cold War stint: 35,000. Just in the press, body and paint shops, more then 20,000 work in three shifts around the clock. (Daimler AG employees number 280,000 worldwide.) A 35-hour workweek in Germany is further enhanced by six weeks holiday in a worker's first year, plus seven to ten statutory holidays. Jobs are rotated every two hours and the vast majority of workers are trained similarly so a worker from Bremen can swap jobs with one in Sindelfingen or South Africa. In 2015, the Sindelfingen plant celebrated its 100th anniversary producing its 20 millionth car.

More than 300,000 vehicles roll out the doors in Sindelfingen every year including the Mercedes E-, S– and CLS Class, the CLS Shooting Brake, Maybach and the AMG GT. "We're as big as Monaco – but we have more luxury cars," guide Gaby says of the sprawling three-square-kilometre plant.

I can't remember what models I worked on, or indeed which were assembled in Sindelfingen in 1980 and not surprisingly, the question stumped my younger guides. I do remember that the job offer fell into my lap in late April and by early May, I was flying Wardair to the Bundesrepublik Deutschland (BRD or West Germany) along with 10 other Canadian university students who were soon widely dispersed throughout the factory.

As widely as English is spoken today, the language (as well as French) was virtually non-existent at Daimler-Benz at the time. Hand signs and repeated loud instructions were deemed enough training to learn assembly line routine. And learning to speak German proved an illusive goal with not a single German national working on my line. (Indeed, when I eventually returned to Canada, I spoke more Turkish, Italian, Greek and Spanish.)

As an alumni on my November visit, I managed to finagle my way into a lunch-time schnitzel (no beer) at one of the factory's massive cafeterias which proved to be another trip down memory lane. As I look around at the faces of the many workers, I'm told that about 20 per cent of today's work force comes from 60 different countries, as well as many second and third generation children of Germany's guest worker program, once dominated by Turks.

As I later learned, many of the German phrases I did pick up were in Schwabisch, the dialect spoken in the state of Baden-Wurttemberg, of which Stuttgart is the capital and where a large Mercedes star sits atop the main train-station tower.

The area itself is easy to get to. On my visit, I arrived in neighbouring Boblingen from the Frankfurt Airport in just under two hours using a Rail Europe pass, valid on trains and local transit. A five-minute walk from the Boblingen train station and a 10-minute walk to Mercedes' Welcome Centre is the nostalgic and wonderfully kitschy V8 Hotel, complete with vehicle-themed rooms. Part of Motorworld, the site is in a reclaimed airport filled with hundreds of models, makes of museum quality and restored "old timers" – many for sale.

Meanwhile, Stuttgart, which is a 20-minute train ride away, offers enough distraction for days, from wineries, to castles, to museums, to more car manufacturing. (Porsche's roots are also in the area.)

By far, the most impressive of these institutions is the colossal and architecturally significant Mercedes-Benz museum at the Neckarpark. The building holds an overwhelming historical collection that begins with a replica of the world's first automobile – Karl Benz's three-wheeled, single-cylinder, four-stroke car built nearby. Leave yourself lots of time to walk through the 16,500-square-metre space, filled with about 1,500 exhibits.

On tour of the museum, I fill my notebook with guide Vivien's comments, but her paraphrasing of Daimler AG's Chairman of the Board of Management Dieter Zetsche keeps resonating as I wander about on my own afterward: "We'll see more changes in automobiles in the next 10 years than we've seen in the last 100."

The walk to the Mercedes plant from Motorworld and the V8 Hotel is about 10 minutes. There's also a free bus that runs regularly from the train station. Better yet, buy a Benz in Canada on the "Tourist Delivery Programme," collect it in Sindelfingen and spend a week or three buzzing around Europe, then return it for shipping to Canada. After the plant tour, plan a second day for the Mercedes-Benz museum which is on the opposite side of Greater Stuttgart. Adult admission is €10 ($15 Canadian), with an English tour, €15. Evening admission is €4.50. Curiously, Mercedes-Benz Museum ticket holders receive a 25-per-cent discount at the Porsche Museum. 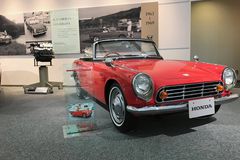 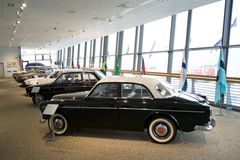 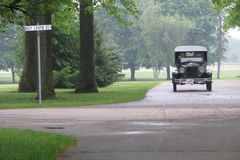