The Whitefox concept is a four-passenger snowmobile that can run in existing snowmobile trails. It would be equipped with a 165-horseppower Rotax 850 E-TEC engine. 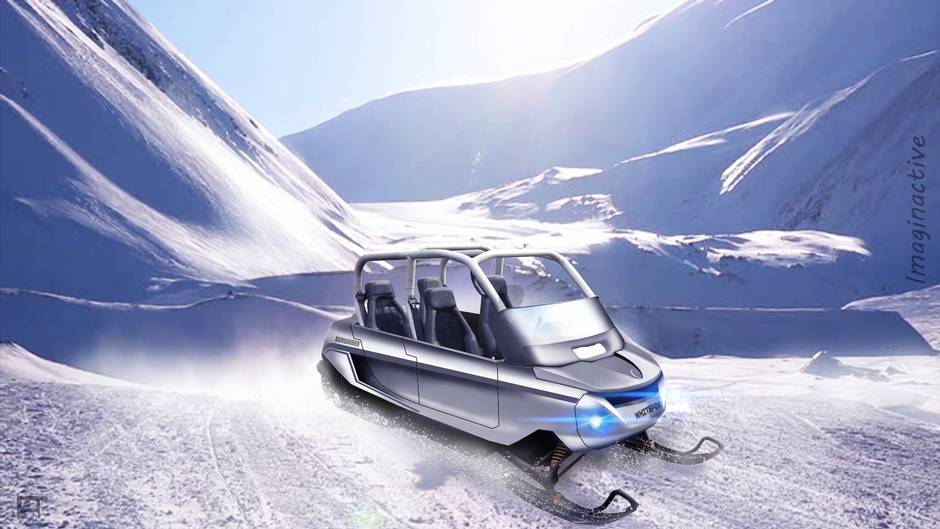 In 2001, I was in charged with developing a side-by-side snowmobile project for BRP that was later called the Ski-Doo ELITE. In fact, the Elite was the last snowmobile built under the name Bombardier before the company became BRP. The last unit rolled out of the assembly line in Sherbrooke, Québec on December 24, 2004.

During the development period , I asked my friend Yves Bergeron to build a stretched out version to sit four passengers. This project led to a prototype, which you see here in modified photo renderings. This vehicle could be rebuilt as the Whitefox model—a snowmobile built to carry a whole family. 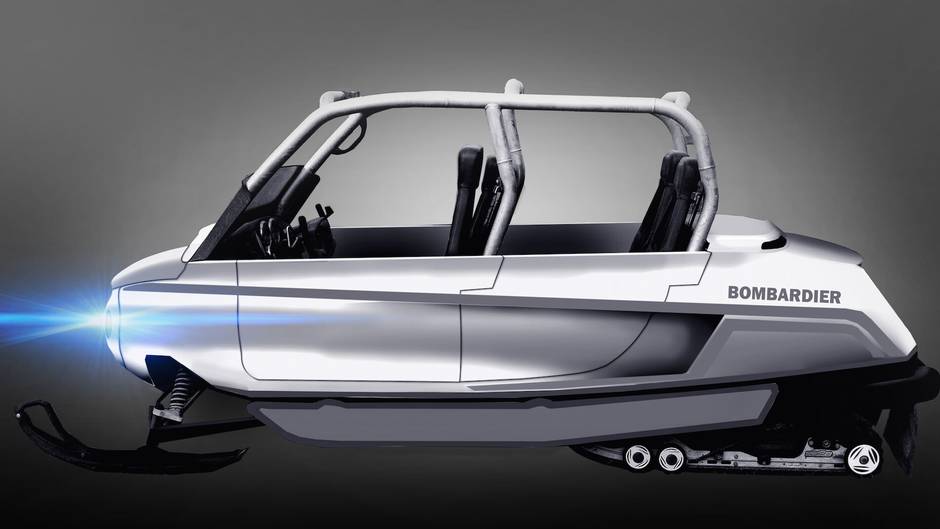 We basically took an old Elite prototype (to save cost) and stretched it by three feet. We added two seats and traded the 140-horsepower, four-stroke Sea-Doo engine for an 850cc two-stroke engine by Rotax to reduce weight.

The original side-by-side was made of fiberglass, but I would instead redo the body work digitally and factory print a new body made out of plastic. With this change, the vehicle would probably weigh less than 900 pounds.

The Whitefox could be introduced with a built-in ski and snowboard rack bolted on top of its upper frame. Each seat (or the floor) could also be heated by using the engine’s cooling system, and fans could also divert hot air on the riders’ legs, which could be covered by an insulated blanket.

We would also add the power steering of the Spyder and Can-am lineup while modifying the steering controls to improve ergonomics. In fact, it would probably be better to introduce drive-by-wire to ease pressure on the thumb and calibrate sensitivity more adequately. I would also add pop down wheels on the skis to facilitate turning on asphalt or hard surfaces. 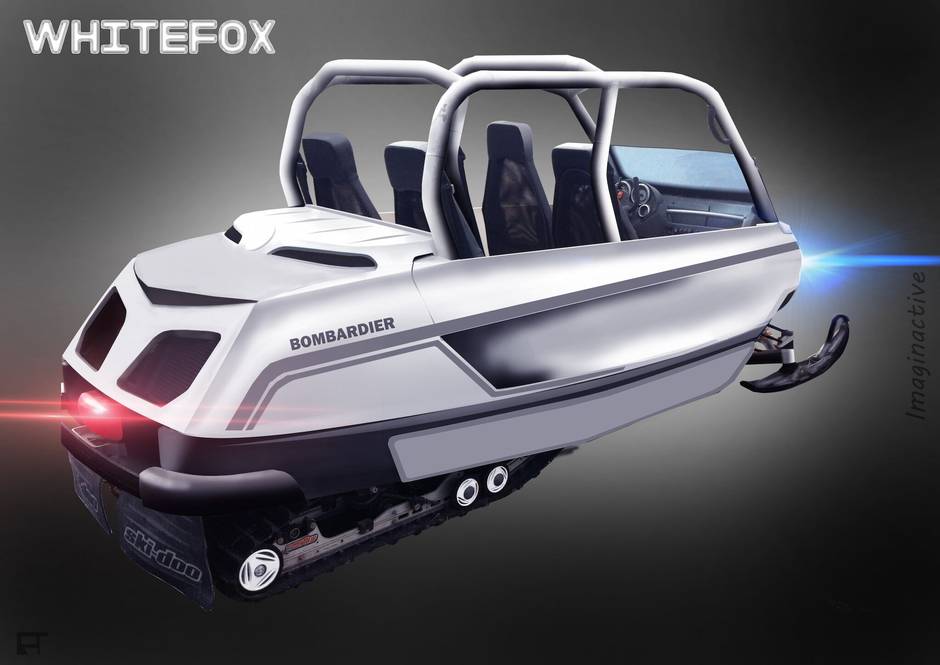 There is a market for a four-seat snowmobile. I think riding with your wife and kids is a really cool way to enjoy the winter. Going out on weekend trips with your family in one sled and your gear safely tucked in a trailer behind would be fantastic.

Of course, the development cost for such a project is risky, but in my humble opinion, the market is always evolving. Building a snowmobile that can seat four will definitely have an impact on the public’s perception of snowmobiling. 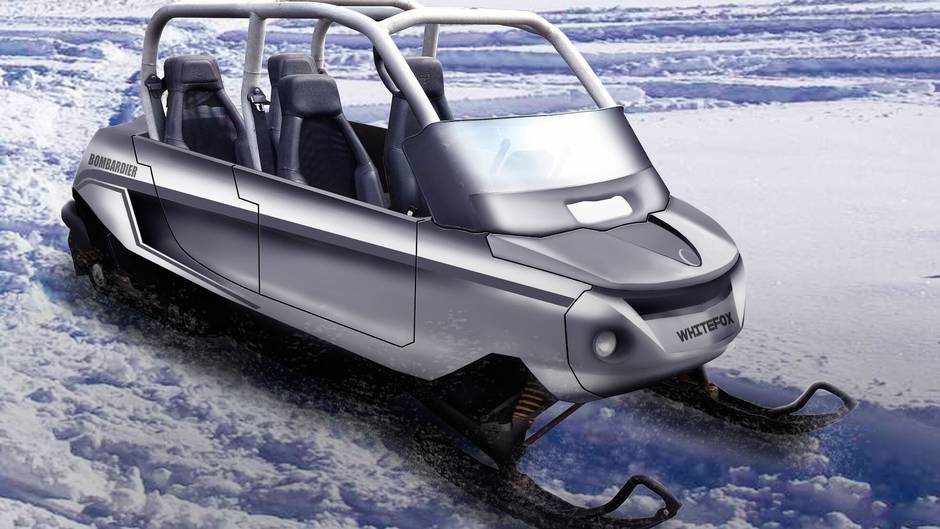 I would like to thank Ashish Thulkar, who modified the images of our existing prototype to create the renderings of the Whitefox. Thulkar graduated with a master’s degree in design from the Indian Institute of Science in 2014. He currently works as a freelance vehicle designer at the Indian Institute of Science. He also created the Drone Tower concept and the Tridika 3D People mover. 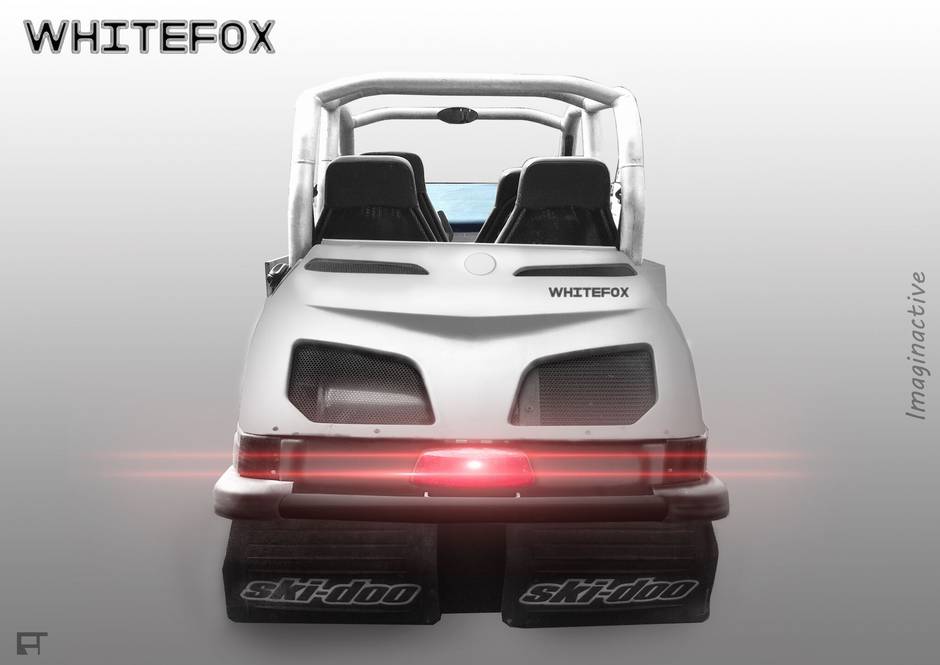