The Paradoxal is a commercial supersonic/hypersonic passenger aircraft concept capable of flying on a sub-orbital parabolic trajectory between distant parts of the globe within hours. It uses a Rotary Ramjet engine as the air-breathing engine and then converts to a rocket to reach a suborbital altitude. A line of counterflowing jets of air on the aircraft’s leading edges reduce heat and drag during the ascent and re-entry phases of the flight.

The Paradoxal would thus be able to fly from Los Angeles to Sydney in less than 3 hours (12,200 kilometres) and make a gracious suborbital parabolic incursion into space for a fascinating view of the stars and Earth from Space. 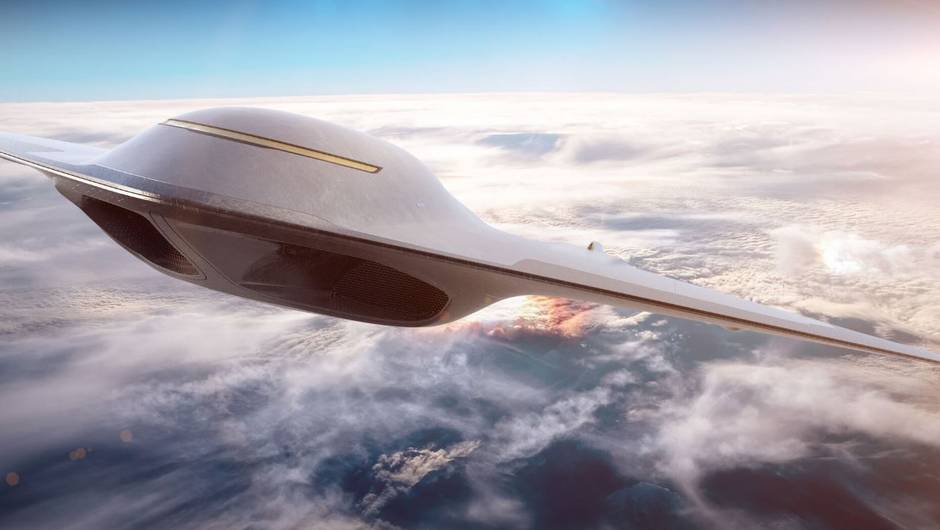 Early this year, I imagined two variations of hypersonic aircraft concepts. The first one was the Skreemr, and the second was the Antipod. Both concepts generated lots of comments online and I was fortunate enough to get feedback from scientists proposing new kinds of technology to address problems such as heat build up, cost, and practicality.

It’s obvious the world hungers for a quantum leap in faster global passenger transportation and the Paradoxal aims to inspire the next generation of engineers and scientists in dreaming and building it in a not too distant future. 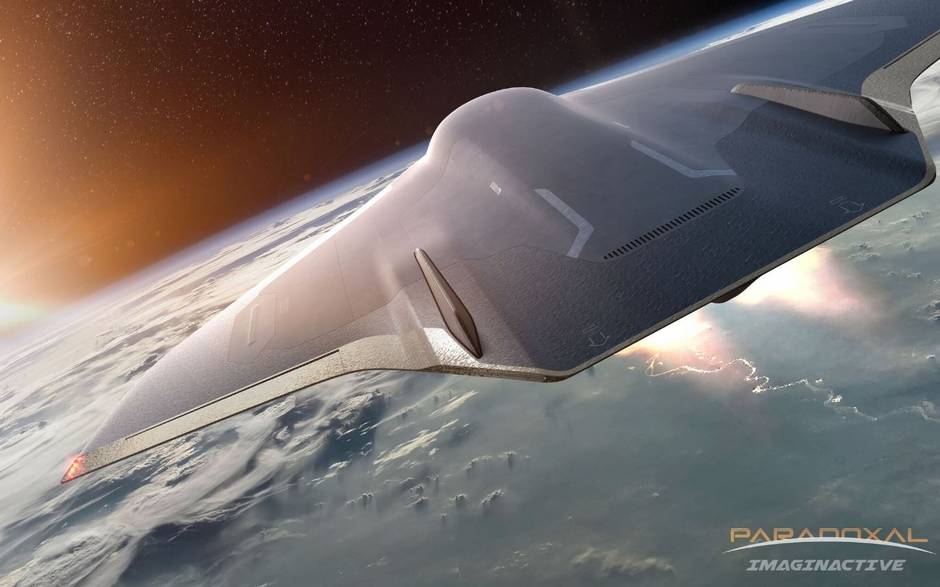 The Paradoxal would take off directly from any airfield using two Rim-Rotor Rotary Ramjet Engines (R4E). These turbines produce significant thrust in a single-stage by spinning ramjet thrusters at supersonic speeds (tip speeds up to Mach 3) held together by a carbon-fiber rim-rotor.

The R4E engines have a high power-to-weight ratio and could be manufactured at relatively low production costs (similar to today's automotive turbochargers). Efficiencies are similar to piston engines and low pressure ratio gas turbines (20-30 per cent).

The air-breathing engines would provide enough power to lift off, climb to 50,000 feet, and reach Mach 3. At this point, the engine would turn into a rocket engine by injecting liquid oxygen (LOX) into the gas exhaust port that would continue pushing the Paradoxal at supersonic speeds up to an altitude of 66 km, setting it on a parabolic sub-orbital trajectory toward its distant destination.

In mid-flight, you would see Earth’s curvature and the plane’s multiple onboard cameras would grant you access to a video feed of the view along with the best pictures. You would even get to experience weightlessness for one brief minute before heading back toward Earth.

The leading edge of the plane’s wings would be fitted with linear ‘Long Penetration Mode (LPM) nozzles’ so air could flow out of them to create a ‘paradoxal’ effect whereby the plane could fly faster. As the speed increased to first supersonic, then hypersonic velocities, the engines or onboard tanks of compressed air would supply air to the LPM nozzles along the leading edges of the plane. As the Parodoxal accelerates and climbs, the LPM effect would reduce thermal loads while also reducing overall drag.

For this reason, the Parodoxal has a flying wing or blended wing body shape with one long leading edge. Passengers sit in one large, theatre-like cabin. Galleys, heads, and baggage stowage compartments are aft. Gone are the days of tube-and-wing planes with their long rows of cramped seats.

About 45 minutes before landing, the LPM flow would be restarted using air from compressed air tanks. The LPM effect will cool the plane during atmospheric re-entry and allow it to slow gradually to subsonic velocity. By the time it returns to 50,000 feet in altitude, Parodoxal will again use air-breathing turbine engines and flying below Mach 1 for its final approach to its destination.

For the cruise part of the trajectory, the passenger plane would fly well above the stratosphere, at the very edge of black space. Over 550 passengers would enjoy spectacular views of our planet without experiencing the discomfort of reduced gravity because the plane would follow a gentle parabolic trajectory.

The plane’s wings and weight would allow it to land on a standard 6,000-foot runway. 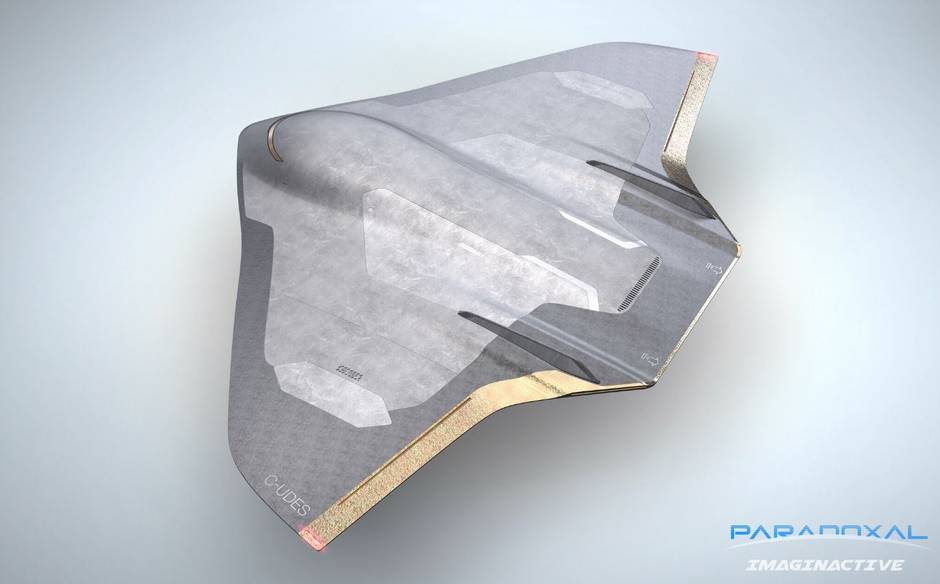 While its main purpose is fast intercontinental passenger service, the Paradoxal could also be developed and used by other government agencies. The majority of the trip is exo-atmosphere on a ballistic trajectory, so it can also be perceived as an aircraft that mixes space tourism with business travel. 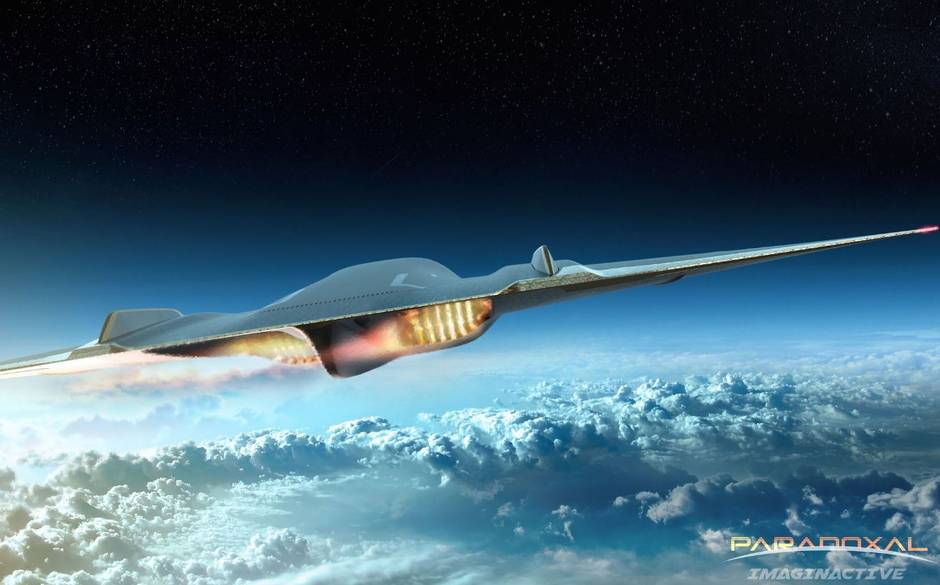 The LPM system is a key component of the Paradoxal. Its NASA inventors are E. O. Daso, T-S Wang, V. M. Pritchett and R. A. Farr in Huntsville, Alabama. The inventors of the R4E engine concept are Jean-Sébastien Plante, David Rancourt, and Mathieu Picard from the University of Sherbrooke. You can contact these people directly to learn more about their inventions. 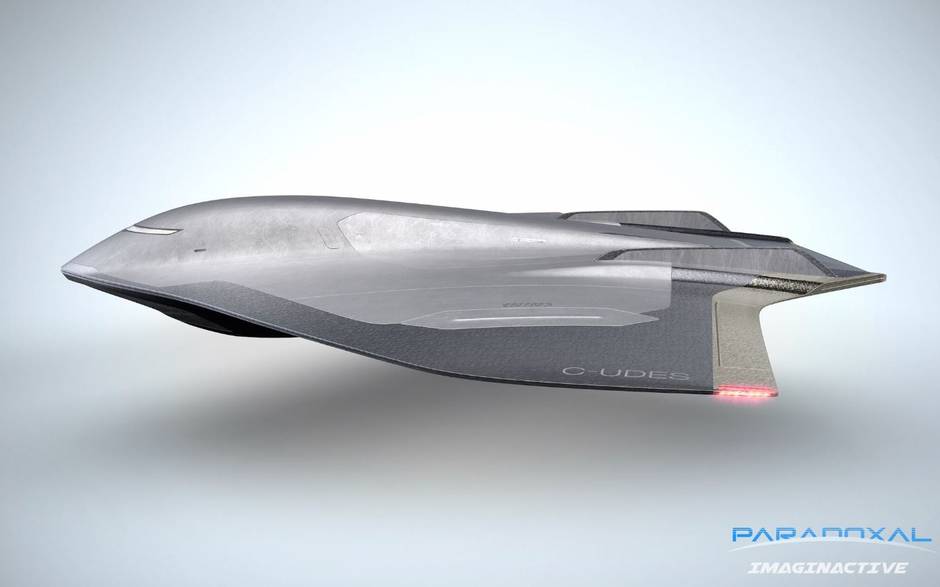 The Paradoxal concept was developed in collaboration with Juan Garcia Mansilla, an Industrial Designer from Argentina. Mansilla graduated from the University of Buenos Aires in 2012. He is a Senior Industrial designer who also designed the Beeonic robotic bee concept and the Paspartu amphibious vehicle equipped tires able to minimize soil erosion.