Stephen Beatty was looking through some old papers not long ago and found a report prepared for then-prime minister Joe Clark on Canada's hydrogen-powered future.

He's not alone in thinking this way. Toyota is part of a Canadian consortium with Hyundai, Honda, Kia and Mercedes that lobbies the government to invest in hydrogen – and that investment is now beginning.

"We've been waiting 20 years for this moment, and the next five years will be very, very exciting," says Daryl Wilson, CEO of Mississauga-based Hydrogenics, which builds hydrogen fuelling stations – but none yet in Canada.

That's still the big chicken-and-egg issue. There are no public fuelling stations for hydrogen in Canada. Until there are places to refuel, auto makers who build hydrogen-powered cars see little point in bringing them to Canada. Instead, they're focusing on more hydrogen-friendly countries such as Germany and Japan, and in California.

Last year, Hyundai brought a dozen hydrogen-powered Tucsons into Canada and currently leases six of them to drivers in the Vancouver area. The vehicles are fueled at Powertech Labs, a subsidiary of B.C. Hydro, in Surrey B.C. Another Tucson is driven in Ontario by Hydrogenics' chief technology officer, who fills his at the office. And that's it.

You can also refuel, in theory, at the Hydrogen Research Institute at the University of Quebec in Trois-Rivières, but no car ever does – their 500-kilometre range just won't let them drive that far.

But, also last year, Toyota began selling its hydrogen-powered Mirai in Japan, Europe and California. Unlike other makers, it sold the car outright. You buy it, you own it. Honda is considering the same arrangement with its Clarity hydrogen car, which is ready to go into production.

"The bottom line is, if there are no fuelling stations there will be no vehicles," a Honda Canada spokesperson says. "Hydrogen-powered vehicles are a scarce resource, and these vehicles will be deployed by manufacturers in jurisdictions that have the necessary infrastructure to support potential consumer demand."

This year, Toyota plans to sell 3,000 Mirais around the world, including to four European countries. Next year, it wants to sell the car in the northeast United States, where local governments are working with Quebec supplier Air Liquide to provide fuelling stations. That means momentum is building and Beatty is eyeing its potential for Canada. He's imagining a Hydrogen Highway from Quebec to Detroit that would serve both fleets and private drivers, as well as supply fuel to industrial users.

"We are almost precisely at the same point that we were at in the late nineties when we were thinking of bringing the Prius to market," he says. "We'd developed the technology for the car, then we started to ask ourselves, is the market itself ready for this technology?"

In Canada, we're not quite there yet: The advantages of hydrogen-powered cars are not understood well enough to make them desirable. Their advantages, however, are considerable.

A hydrogen car is powered by a fuel-cell and driven by an electric motor. The hydrogen is the fuel for the motor, in the same way that gasoline is the fuel for a conventional car engine. The difference is that hydrogen is limitless and can be created with clean energy and its only emission after use is water. A hydrogen car can be refuelled as quickly and easily as a gas car, and the electric motor doesn't need to store its energy in a limited-range battery. Nor does it ever need to be plugged into a socket.

The Mirai – which means "future" in Japanese – costs $57,000 (U.S.) in California, but the cost will inevitably be reduced with mass production. As well, the technology behind such vehicles is improving almost daily with dedicated, relentless research.

"At one time, a fuel cell would only last three or four years and would then have to be replaced," says Don Romano, president of Hyundai Canada. "Now, these fuel cells are going up to 15 years. There've been remarkable advancements in the ability to make fuel cells reliable."

More to the point for Canada, Romano says, is that we have an abundance of clean electricity. Last year, Ontario sold six terawatts of surplus energy to the United States and Manitoba at 35 cents on the dollar, with each terawatt costing about $100-million to produce.

"If we can keep that electricity in Ontario and convert it to hydrogen, and then use it not only to propel cars but to power an entire industry, we'd be creating a much better environment," he says. "We have plenty of electricity we produce without carbon – now we just need the distribution to come together. And it's going to. It's inevitable."

Everyone's looking to the federal government for the next move, and Natural Resources Canada just closed a request for proposal on building two hydrogen fuelling stations in the Greater Toronto Area. Hydrogenics is one of the companies that put in a proposal, with a local, clean-energy generating station and pump that will cost up to $3-million, and it's optimistic this could be the start of a snowball effect.

"We've shared with the federal government a vision for more than 100 stations across Canada," Wilson says. "That would be the next major step in overall deployment, and would support a substantial fleet of vehicles across the country.

"Now the pieces are falling into place, and the platform for it to grow is absolutely happening. With cars available, and fuelling stations available, it's kind of a whole new story."

Editor's note: An earlier version of this story stated the Hyundai hydrogen-powered Tucsons could be fueled at a fuelling station at the University of British Columbia. That station is no longer operational and the cars are being fueled at Powertech in Surrey, B.C.

Toyota's Mirai is boring, but a complete revolution in automotive thinking
August 10, 2016 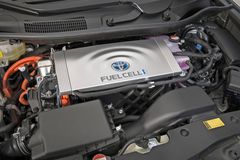 Fuel cells have major advantages, but may be this generation's Beta?
September 25, 2015
Follow us on Twitter @globeandmail Opens in a new window
Report an error
Due to technical reasons, we have temporarily removed commenting from our articles. We hope to have this fixed soon. Thank you for your patience. If you are looking to give feedback on our new site, please send it along to feedback@globeandmail.com. If you want to write a letter to the editor, please forward to letters@globeandmail.com.
Comments