As anyone who has tried to resell an older smartphone likely knows, there's not a lot of money in aging electronics. With the speed of innovation making gadgets obsolete almost as soon as they hit store shelves, they just aren't retaining value like they used to.

It's a fact that may soon become true with cars. Experts are warning that the raft of technological features being packed into new vehicles could negatively affect their value over time.

"Shoppers should be really wary of ticking every technology box on a car if they're concerned about resale value," says Brian Murphy, vice-president of research and editorial at Canadian Black Book. "It could amount to very little addition of value to your car in the future."

An $8,000 technology package with a high-end infotainment system and advanced safety features, for example, could be worth as little as $900 just five years down the road, he adds.

The reasoning is simple. Just as with phones, technological features that seem flashy and innovative in a brand-new vehicle can feel dated after a few years.

Next year's model will always have something flashier and more innovative – and that's especially true with infotainment panels.

Car stereos used to be easy to swap out with more modern and capable after-market products, but today's systems tend to be integrated into the vehicle itself. That makes them harder to update and more susceptible to obsolescence.

"You have a lifespan on that product," says Mark Boyadjis, principal automotive user experience analyst for IHS Markit. "It might be built for 10 years, but it might not be relevant in five."

Government incentives are accounting for some of that discrepancy. In Ontario, for example, where the EV rebate is $14,000, a new Leaf can be had for almost the same price as a three-year-old model.

But more to the point, EV technology is also advancing rapidly. Batteries and range are improving with each successive model, making older versions less appealing.

"The first generation of EVs are like the black-and-white televisions of the automotive world," Murphy says. "What they achieved is amazing, but the market is about to be hit with all the colour sets."

Tesla appears to be bucking the fast depreciation trend so far, Boyadjis says, partly because the brand has luxury cachet, but also because the cars are equipped with wireless connections. Over-the-air connectivity means software capabilities, including the infotainment system, can be regularly updated and kept relatively modern.

More car makers are looking to add such connectivity as a way to keep vehicle systems up to date, he adds.

Consumers are otherwise starting to sense this depreciation phenomenon, which is being seen as one of the reasons behind the growing popularity in leasing. Better rates are the main factor, but an increasing number of drivers are also seeing the future-proofing benefits of leasing versus owning.

About a third of Canadian drivers are currently on leases, according to Scotiabank Economics, up from 19 per cent in 2013 and just 9 per cent in 2009.

The next step by car makers is looking like Leasing 2.0, or cars as a subscription service. Some manufacturers, including Porsche and Cadillac, are offering cars bundled with insurance and maintenance for a set monthly fee.

Volvo, for one, has confirmed its Care by Volvo subscription plan is coming to Canada this year. The car maker hasn't yet announced pricing, but American drivers can pay U.S. $600 to get an XC40 SUV on a two-year agreement – much like a smartphone plan.

Car companies are indeed borrowing the idea from Apple, which has been selling an iPhone subscription plan in the United States for the past few years. For $32 a month, buyers can essentially rent the newest iPhone, then swap it in every year for the latest device.

Industry observers say it's too early to predict whether such a scheme will work with cars, but they do believe smartphones and vehicles are inextricably linked in other ways.

Absent a wireless connection of their own that they can use to stay modern, cars will have to increasingly rely on smooth integrations with smartphones to avoid obsolescence.

"I wouldn't buy something without Apple CarPlay and Android Auto because if you go and sell it in a few years and it doesn't have those features, that may make that vehicle that much more difficult to sell," Murphy says.

Self-driving cars will crash under the Apple model
March 2, 2018 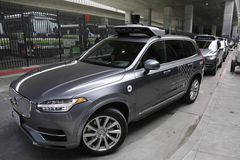