Distraction is more of a default state than a momentary lapse.

It takes a monk-like amount of self-control to get anything done on a computer with Facebook notifications popping up, your phone buzzing and aren't you curious what's happened on Twitter since you last checked four minutes ago?

Pointless updates from your friends and enemies plus all the world's knowledge are one click away, but instead, you're expected to get some TPS report for your boss done. Ha-ha! Good luck with that.

Just because you close the car door and put on your seat belt, these distractions don't vanish. They're all still there, on your phone, and, increasingly, in your car displayed right there on screens built into the dashboard.

Newer infotainment systems will read out text messages and let you dictate a reply. You can have your e-mail displayed on the dashboard, or even check Facebook and Twitter from the car's screen. This tech isn't reserved for luxury cars; it's available on everything from Mazdas to Maybachs. When you're distracted at your desk, you don't get anything done. When you're distracted in a car, it could be fatal.

How is all this infotainment stuff legal? Because you press "okay" to whatever disclaimer flashes across the screen when you start your car? The death toll from distracted driving has doubled since 2000 in Ontario. Look away from the road for five seconds doing 90 km/h and you'll have travelled the length of a football field but seen none of it. In North America, four million crashes each year are linked to distracted driving, according to the Canadian Automobile Association.

Transport Canada recognized the danger posed by in-vehicle infotainment screens back in 2003. "This concern is based on a substantial and mounting body of evidence indicating that using these devices impairs driving performance," Transport Canada's report found. It didn't just study cellphone use in cars, but built-in tech such as navigation systems, adaptive cruise control and internet access.

In 2012, the U.S. Department of Transportation proposed a list of recommendations to make infotainment systems less distracting. Suggestions included reducing complexity, limiting unnecessary information in the driver's field of view and limiting the time needed to glance at screens to two seconds. The guidelines also proposed disabling certain functions – such as text messaging, social-media browsing and displaying more than 30 characters of text – unless the car is parked or the screen can't be seen by the driver.

Bits and pieces of the guidelines have been adopted by auto makers, but you can easily spend five distracted seconds digging through sub-menus on any car's screen. You could be looking for the setting that changes the colour of ambient lighting, or the one that turns on the perfume atomizer, or the one to display album artwork for your music. I wish I was making this stuff up, but these are all real features in new cars.

Tesla's gigantic in-car screens – mounted in the centre of the dashboard – have an internet browser built in. A study of Tesla drivers by web analytics firm Quantcast found browser activity peaked during typical commuting times. I'm hoping all of that was done by passengers, but I doubt it.

The number of functions and features crammed into cars has ballooned, but we're still using the same handful of buttons and screens to control it all. It's not working.

What's the solution? Smarter technology, not less of it, according to industry insiders.

"Making it safer has a lot to do with personalization, with knowing the things you want to do and where we can help you by reducing the options, or actively promoting an option," said Thom Brenner, vice-president of connected car services at BMW.

He stressed that BMW takes driver distraction very seriously. "There's a really rigid [development] process for anything that goes on the car display and is being used while driving," he said. The developers measure the info that goes on the screen to make sure it's not too much to read quickly or too dense to absorb at a glance.

The complexity of a modern car is hard to imagine. There are 25 million lines of code running Audi's infotainment system according to Thomas Muller, executive vice-president of electronics at the auto maker.

"We need to simplify. We need to specialize. And we need to also think about new ways of interacting, like speech, for example," Muller said.

Simplifying could mean moving some functions from the car to an app. Power users, he suggested, might one day be able to dive deep into the menus and settings through an app while sitting on the couch.

Both Muller and Brenner said voice control will play a big role in the future.

The systems available in cars at the moment are frustrating. But the technology is improving, as you know if you've tried to use Siri lately. It's a lot more accurate and useful than it was just two years ago.

Cloud-based natural voice recognition, such as the system that's in Audi's upcoming A8, doesn't need drivers to learn keywords or say addresses in a particular format, Muller said. "You can just say, 'Put up the temperature,' or 'Drive me to blah-blah-blah.'"

In theory, this all sounds like it could solve the most egregious distractions for drivers, but we'll have to wait and see how it works in the real world.

The other solution is that, as drivers, we could all become monks, able to ignore all distraction and focus in on the task at hand. But, judging by the number of times I checked Twitter while writing this, I don't think that's going to work. 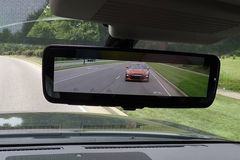 New plug-in devices work like Fitbits for your car
December 4, 2017 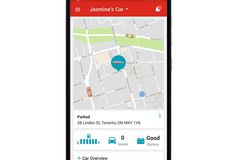