The PIXI is an electric driverless bus capable of becoming transparent to the observer, whether you are a passenger sitting inside or a pedestrian standing on the sidewalk. The clean and silent Pixi can accommodate up to 14 passengers, and it can recharge itself while moving, similar to Bombardier's Primove bus prototype recently launched in Mannheim Germany.

In May, 2013, I worked with Jan Bujnak on the Otobuxi smart urban bus concept. It was my first attempt to imagine a compact bus designed to travel quietly and efficiently on narrow residential streets. In April 2014, Xavier Gordillo and I worked together on another ideation called the Gemini. This twin deck panoramic bus concept recently won an award from Local Motors. The Pixi is a natural evolution and fusion of those two concepts with a few additional cool tricks.

First of all, the Pixi's side walls would be plastered with modular screens capable of displaying images of the scenery behind the bus. Small cameras between each panel would capture the video feed and simply display it on the other side of the bus. Therefore you would be able to see behind the Pixi in real time. The screens could also be used to display ads or public information.

The same principle would also apply inside the bus. Passengers would be able to see outside the bus by viewing screens fixed on the inside walls, making claustrophobic passengers feel less trapped. The rear and front of the bus would consist of large panoramic bay windows to let natural light in.

The 4WD and four-wheel steering Pixi would draw its power from automatic inductive power transfer switches embedded below the street. The Pixi would also be capable of leaving its route and riding on any city street by using stored energy in its battery packs. With its electric motors, the Gemini would be silent and eco friendly.

The Pixi's rooftop would be equipped with two transparent octagonal glass windows which would be able to slide open and let fresh air in on pleasant days. The bus would also feature pedestrian airbags like the ones proposed on the Gemini as safety measure.

In my opinion, it's time to introduce electric buses in our cities. Most residential streets nowadays are not serviced by city buses because they are too big, noisy and too imposing for the residents. The Pixi could address these issues and bridge the gap between cars and the subway. It could pick you up right in front of your house, exactly when you need a lift, and bring you to the nearest connection point. Transit authorities could offset the operating cost by using both sides of the Pixi's wall to display news and public information along with entertaining ads.

I would like to thank Xavier Gordillo, who created the images of the Pixi bus. Gordillo lives near Trebic, Czech Republic. He studied Car Design at the Europe Design Institute (IED) and works as a Freelance Industrial Designer. Xavier also created the images for the UPEX delivery truck and the award-winning GEMINI concept.

New ideas for TTC buses could change how we commute
June 5, 2017
It’s like a three-wheeled motorcycle, but would be able to fly
May 15, 2018 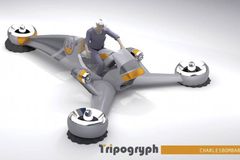 Enclosed motorcycle with tandem seating for weekends away or commuting
May 15, 2018