Dashboard cameras – they're not just for police any more. And law enforcement couldn't be more thrilled about it.

"They've been invaluable to police," says Constable Clint Stibbe of Toronto Police Traffic Services. "I can't say anything bad about dash cams. They help protect the driver and offer a third-party witness to anything that may occur."

That, more or less, is how dash-cam makers such as Garmin, Papago and Magellan are marketing their products. The devices, they say, effectively act as neutral third-party observers and can help drivers document incidents including accidents, collisions and break-ins.

Having video of such events, after all, can come in handy in the case of a court proceeding or insurance dispute.

"We've heard from customers that it's like having an eyewitness in the car, so to speak. If anything happens, they'll have a recording," Garmin spokesman Cesar Palacios says. "'This is what happened and I have proof of it' – that's the biggest advantage from a customer's standpoint."

Smaller sizes and lower prices are helping to fuel the gadgets' popularity. Analysis firm Grand View Research expects the global dash-cam market to hit $1.8-billion (U.S.) by 2022, or double its value from 2014.

The devices themselves, which plug into a car's power outlet and attach to the dashboard or windshield, typically sell for between $100 and $400 (Canadian) and are increasingly packing in extra features.

Newer models include GPS chips that stamp recorded videos with time and location information, plus lane and collision detection and red-light and speed-camera warnings. Some include time-lapse capabilities that compress long videos into highlights while others have Wi-Fi Direct, which allows for recordings to be easily copied onto a smartphone.

Some also record even when the car is not on and a few have voice-activated controls.

Stibbe says drivers may need to be wary of using these extra features, particularly the LCD screens that some dash cams have, because they can run afoul of distracted-driving laws. But the basic recording functionality can be a boon to both drivers and police, he says.

One thing users must keep in mind, however, is that recordings of incidents need to be full and complete in order to be admissible in court.

"If you edit the video, you're compromising the evidentiary value of it," he adds.

That requirement can backfire, since the full video can inadvertently show that the driver was indeed at fault in an incident.

Stibbe recalls one recent situation where a driver who was claiming that he was the victim in an accident was shown to have in fact caused it by backing up into another vehicle.

"The dash cam as a whole is a great idea, but it has to be used appropriately."

Proponents say the devices can also be useful in insurance claims and the prevention of fraud, but insurers themselves aren't saying as much so far.

"We recognize that dash cameras are becoming more and more popular," Belairdirect spokesperson Jennifer Beck says. "We have had discussions on them, but have not come to a conclusion at this time."

Despite that growing popularity and their long history in law enforcement – Toronto police have been using them for at least 15 years – dash cams may ultimately end up being a temporary product, or a stepping stone toward full camera integration into cars themselves.

Just like rear backup cameras, which are now standard in most new vehicles, it could only be a matter of time before safety regulators require built-in dash cams to be mandatory.

Garmin, for one, doesn't see that happening any time soon. There is still demand for stand-alone GPS devices, although it is shrinking, and the same is likely to be the case for dedicated dash cams.

"We don't see our dash cams as a temporary product," Mr. Palacios says. "We have seen consistent growth [year over year] in the category in double-digit areas."

How can I heat up my Toyota Highlander Hybrid during winter?
March 29, 2017
What's Nissan's self-driving solution? The human touch
January 11, 2017
Why car companies make other stuff, like wheelchairs
January 12, 2017 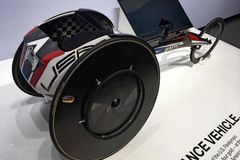