The Firesound is a small electric flying saucer designed to patrol and inspect public parks and forests for signs of fires. It could douse out flames with low-frequency sound waves using its built-in acoustic extinguisher. It could also record and report any incidents to park managers with its multiple infrared cameras and electronic nose sensors.

I recently created a large flying saucer concept named the Roswell FS-II, and shortly after a different mobile concept called the Seekloc. Both of these ideas inspired me to create the Firesound drone. Of course the technology needed to extinguish small fires with sound is just getting started, but it will evolve, and so will drone technology.

The Firesound is shaped like a disc and measures one metre in diameter and approximately 30 centimetres in width. Its shell is made out of composite and other lightweight materials. Its energy source comes from a non-polluting hydrogen fuel cell located in its center. This fuel cell creates enough power for four electric turbofans located on each side of the saucer.

Two air intakes would be positioned at the front of the drone, and two at the back. The exhaust would be pushed out fully directional jet nozzles located under the disk. These nozzles would provide vectored thrust to make it easier for the aircraft to take off and maneuver between trees.

Once in the air and above the trees, the Firesound could invert its rear fan to make it push air. This means that the front and rear fans could pull air from the front and push it out the back to make the craft fly like a disk. The maximum speed that could be achieved would depend on the aerodynamic profile of the Firesound and the maximum cruising power of its electric turbofans.

I envisioned fire extinguishers that would use sound waves on this drone, but they would be restricted to small fires. More important would be electronic nose detectors, thermal cameras, and other sensors. The Firesound could also be used to patrol a park day or night and find lost people effectively. An interesting aspect would be to send out the Firesound after (or during) a thunderstorm when lightning strikes the ground. The Firesound could be tasked in putting out (or localising) fires initiated by lightning strikes before they spread.

The idea behind the Firesound concept is to create a simple and low-cost drone capable of transitioning from vertical to horizontal flight and achieving higher speeds than current vehicles on the market. The Firesound should be equipped with basic features like a medical kit dropbox, sensors, and an easy-to-use interface for park managers. It could accomplish a series of tasks, as well as keeping campers informed of park conditions, and provide them with a large WIMAX internet connection when inflight.

I would like to thank Adolfo Esquivel for the great renderings of the Firesound. He earned an Industrial Design degree from Colombia and completed a postgraduate study on Events Design at the UQAM of Montreal. He currently works as a freelance industrial designer based in Montreal. Esquivel also created the design of the Exocycle urban bike and the Otöcon border patrol drone.

New ideas for TTC buses could change how we commute
May 2, 2015
A car that changes shape to make parking easier
September 19, 2015 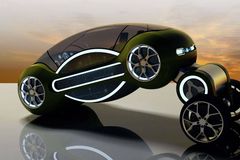 Disney World-style people mover aims to change travel in big cities
August 22, 2015
Follow us on Twitter @globeandmail Opens in a new window
Report an error Editorial code of conduct
Due to technical reasons, we have temporarily removed commenting from our articles. We hope to have this fixed soon. Thank you for your patience. If you are looking to give feedback on our new site, please send it along to feedback@globeandmail.com. If you want to write a letter to the editor, please forward to letters@globeandmail.com.
Comments