Four objects that resemble silver pop cans glisten in the sun atop of what looks like an ordinary Ford Fusion. The cylindrical objects spin like an anemometre in a hurricane.

I get in the back seat and am greeted by two engineers in the front who inform me that we are in autonomous mode.

The engineer in the driver’s seat has his hands in his lap and feet off the pedals as he watches the road. The one in the passenger seat has a computer open on his lap as his eyes dart from the road to the computer screen. The screen shows a real-time 3D map of everything surrounding the car and the view from a forward-facing camera.

The first thing you notice when getting into the back seat of an autonomous vehicle is how ordinary the process seems. There is no Jetson’s music playing and Doc Brown isn’t the driver. The big difference is the presence of hundreds of thousands of dollars in radars, sensors, cameras and other technology.

It is astonishing to watch as the steering wheel turns on its own and the car slows down to stop for a pedestrian – before I have even seen the pedestrian. But it mostly feels like driving with a cautious new driver during a driving test. The car accelerates slowly, it doesn’t speed and it stops for long periods at stop signs. Ford was taking no chances with journalists in the car. 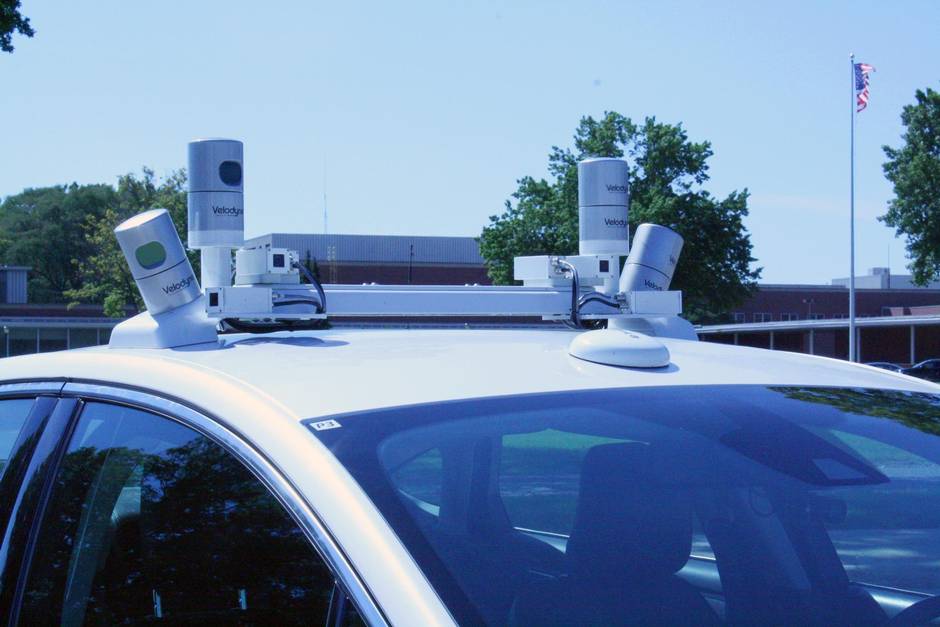 We were driving on Ford’s sprawling Dearborn, Mich., campus on roads that are open to the public as part of a media event on future trends. Today, Ford has 10 of these self-driving cars and 20 more in production. The company plans to use them as a way for employees to get around its campus by 2018.

Ford CEO Mark Fields says autonomous cars will have as big of an impact on transportation as the Ford assembly line did in the last century. The car maker has said it will have a fully autonomous car on public roads by 2021 – that means no pedals and no steering wheel.

“A vehicle where the passenger never has to be prepared to take control,” says Fields.

Although he admits it will likely be for ride-sharing and in a small, well-mapped, geofenced area.

The test vehicles are equipped with Lidar, a spinning device that sits atop the car and shoots out light beams allowing the vehicle to map everything within 100 metres in real time. 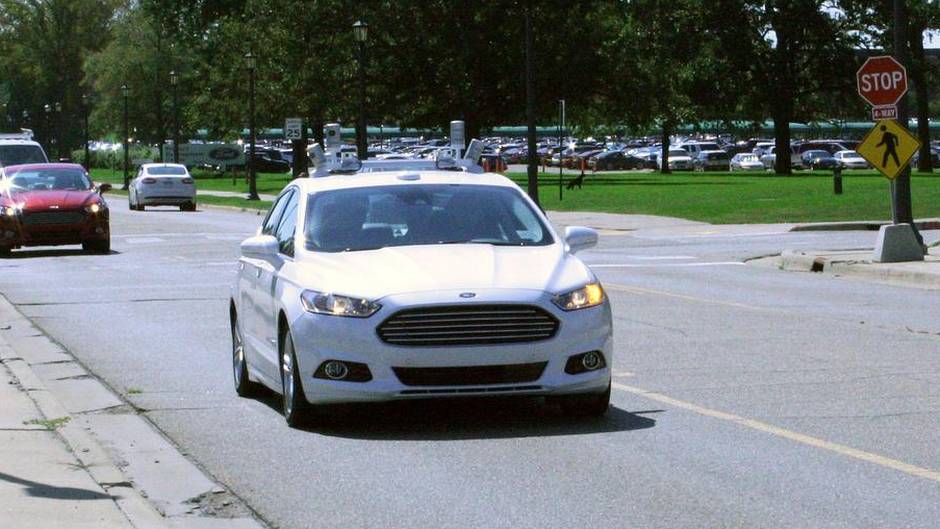 Fields says the cost is coming down, but even in five years will still likely be far too expensive to be a personal purchase. A commercial-grade Lidar unit costs about $35,000. The research-grade ones on these Fusions are more expensive and there are four.

The quick adoption for ride-sharing services such as Uber is causing Ford to rethink its business model and look for new revenue streams.

“We as a management team and as a company now understand that the world has moved from a mindset of just owning vehicles to a mindset of owning them and sharing them,” says Fields.

While he says a number of people will still love to drive, Ford recognizes that a lot of people see driving as a chore and autonomous vehicles can change that. These cars aren't aimed at people buying the new Mustang or GT supercar. 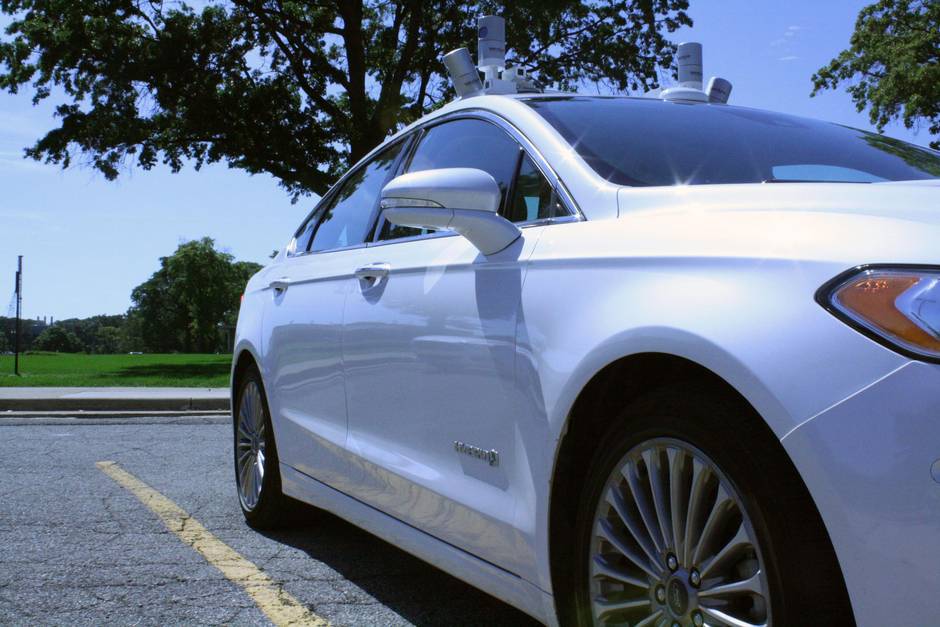 Fields says that by about 2025, “we would make vehicles available for people to purchase for themselves.”

However, there are still a lot of hurdles.

If two drivers arrive at a four-way stop at the same time, they communicate with hand or eye signals who will go first. How can a car learn that? Or if a police officer is directing traffic, how will the car know when to go? 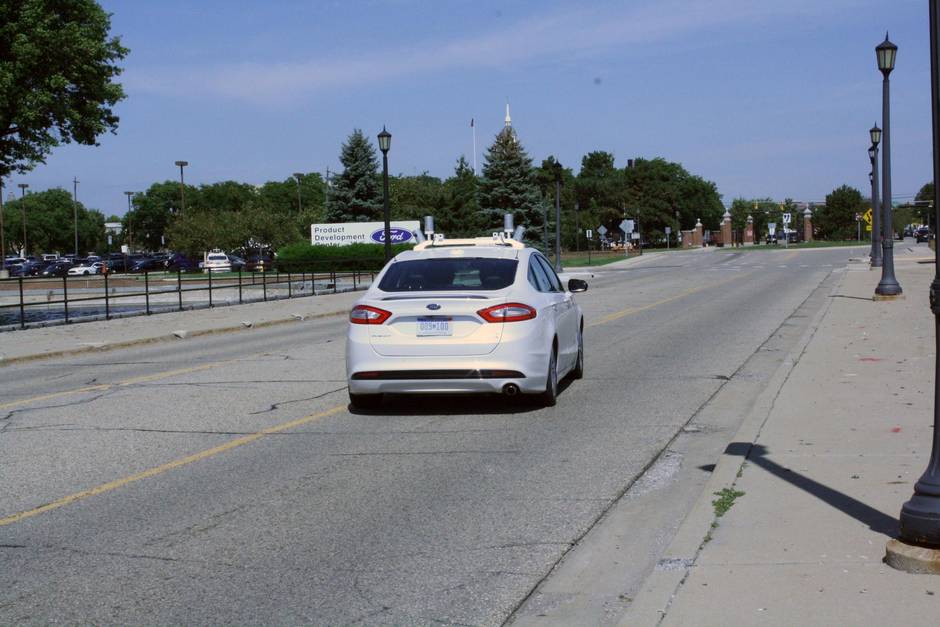 The test car we rode in can detect lane lines, traffic lights, pedestrians, bikes and other objects, but can’t understand head nods or hand waves.

“It's real, the technology is coming and some of it is already here,” says executive chairman Bill Ford, adding there are a lot of ethical issues to work though that aren't being discussed.

“When cars are autonomous, they will have the ability to make decisions much quicker than you or I can as drivers,” says Ford. “That is going to require some very deep and meaningful conversations as a society in terms of how we want these vehicles to behave. Whose lives are they going to save?”