Skip to main content
Charles Bombardier
Special to The Globe and Mail
Published May 2, 2015

The Xoupir (the X is pronounced like an S) is a futuristic four-wheel drive city bus powered by wireless electricity and designed with today's users in mind. It features smartglass tinted windows, free WiMAX ultra-high speed internet access, and you don't need to buy a ticket or a pass to get onboard.

The Xoupir was created to showcase what our city buses could look like and offer in the near future if we combine various existing technologies. The styling for the Xoupir was inspired by the Mercedes CLS class. I teamed up with Abhishek Roy's Lunatic Koncepts Design firm to work on this mass transit idea. 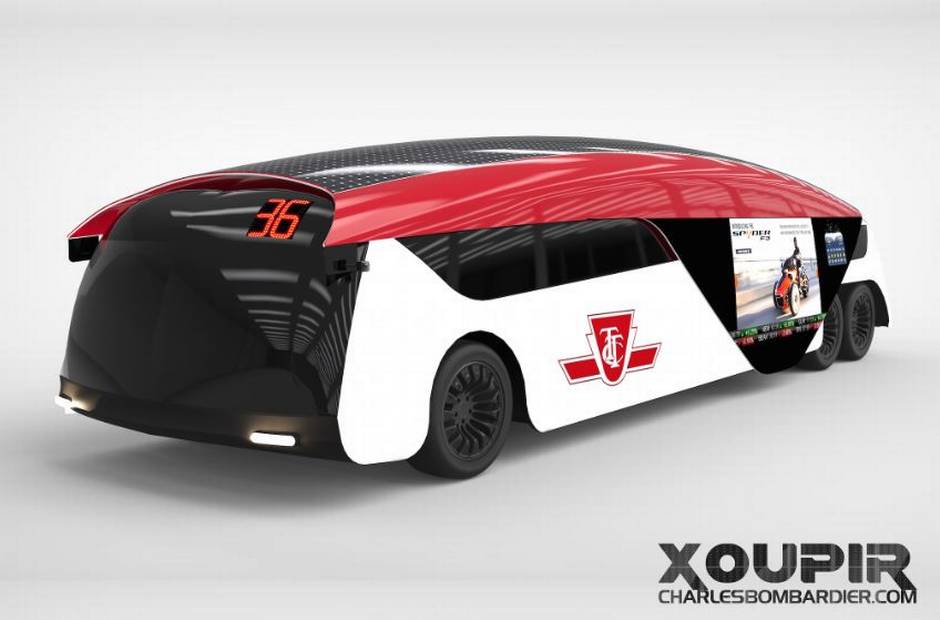 The Xoupir is a fully electric bus. Its four rear wheels provide extra traction for winter use and slippery conditions. It is powered by two electric motors that get their energy from an onboard battery pack, which is recharged by induction coils hidden under the road. Wayside components communicate with the vehicle to ensure that charging segments are only switched on when the vehicle is positioned directly above them. (Learn more here).

The roof of the Xoupir is covered with flexible solar panels to power the communication systems. The top shell also acts as a cooling unit by using the natural airflow and embedded linear radiators to cool the passengers.

The Xoupir would also serve as an ultra-high speed mobile WiMAX station. It would operate similar to WiFi, but at higher speeds (Up to 75 Mb/s), over greater distances (up to a few kilometres), and for a greater number of users. This means that commuters would have access to the Internet everywhere the bus goes.

The Xoupir’s windows would feature smartglass, whose light transmission properties are altered when voltage, light or heat is applied. The bus windows would thus change to block some or all wavelengths of light based on outside conditions. Most users nowadays are using their smartphones and tablets, so tinted glass seemed like a nice option.

OLED screens located inside and outside the Xoupir would feature ads that change based on the preferences of users who are looking at them. This could be accomplished by using eye tracking technology like the ones created by Mirametrix. Cameras would differentiate who is looking at each ad and display more interesting content for each viewer.

Last but not least, anybody could hop on the bus and pay its fare wirelessly with their smartphone or credit card, or simply by using their thumb print (like on the Iphone) to pay with a virtual account. Users could also pay for a friend or ‘Donate a ride’ to person in need by charging the other person’s fare on his account. 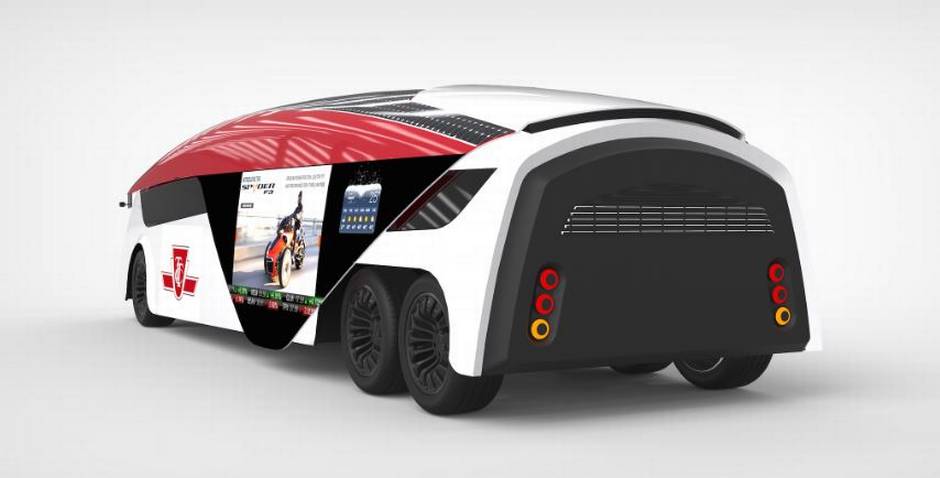 The Xoupir is a series of ideas that could be implemented in today’s buses or in a city’s mass transit network. I really like the idea of silent and non-polluting electric buses that can be powered and recharged wirelessly. I also like the idea of being able to hop on any bus in the world without having to carry a wallet.

I would like to thank Abhishek Roy who created the incredible 3D renderings of the Xoupir. Roy is the owner of Lunatic Koncepts, a design firm based in India. His team also created the renderings for the Vigilente crime fighting trike and the Yeti arctic transport hovercraft.