The Iruka is an electric outboard motor that uses an innovative biomimetic propulsion system similar to the oscillating movement of a Dolphin's tail instead of a propeller. The word Dolphin is pronounced 'Iruka' in Japanese and I thought it fit well with the concept.

The first outboard engines have been around for more than a century now and I wanted to try out a new approach to the conventional propulsion system with this concept. Instead of using a propeller, the Iruka engine mimics the movement of a fish to displace water and to thrust the boat forward. This idea, was proposed to me recently by an inventor named Brice Thouret.

I asked a team of young engineers from the École de Technologie Supérieure to work on the Iruka concept during their bachelor's degree engineering project. The team dove deep into the R&D of the project, supervised by Henri Champliaud and Mohammad Jahazi. They are currently developing the mechanical system behind it and conducted finite element analysis amongst other development tasks.

In parallel, I asked another team of technicians from the CEGEP de Jonquieres to work on the detailed drawings of the Iruka, based on the computer-assisted models that were developed by the ÉTS team. They too are presently working on the technical drawings related to the Iruka testing jigs and prototypes.

First, let's start with the oscillating propulsion system (OPS). Imagine the tail of a whale, which oscillates up and down, and the resulting force pushes its body forward. The Iruka's biomimetic system is similar; it creates an oscillation by converting the rotation of a motor into this movement. You can tweak the amplitude of the movement, the speed, and the surface and shape of the foil and it will impact the dynamic of your craft. For the Iruka, we are considering the shape of a dolphin's tail, and we placed the pivoting mechanism inside the fairing.

The Iruka's hull was first inspired by the new G2 outboard engine from Evinrude. I really like this new design; however, we needed to develop a body that would protect the up and down movement of the foil so we did have to do some tweaking to the design.

A 7.5 kW DC electric motor would power the oscillating propulsion system (OPS). This motor is placed on top of the engine and a drive belt rotates a crank to convert the movement. The main interest is to determine the efficiency of this configuration compared to a similar engine that uses a propeller. Building a prototype will help us find out.

Ion-lithium batteries located inside the boat will supply the energy needed for the OPS and other electrical equipment. The battery pack will also be equipped with an onboard charger so that you can charge it at your dock with an AC cord or move it on wheels like an airplane carry-on.

Alternatively, the Iruka could be fitted with a combustion engine, like a 10hp four-stroke engine. The silent electric drive seemed more appropriate for this concept, which relates in many ways to nature. Turning will be achieved by orienting the Iruka to the left or right with a control lever just like on a regular outboard engine.

What's It's Used For

The Iruka will be a quiet, personal outboard engine. It will not emit CO2, and it could use the sun or the wind to recharge its batteries at the dock. It will be built with strong and lasting materials, so you can keep it in the family for a long time.

This is a concept that needs to be built and tested, of course. The draft it will need might prove inadequate for shallow waters. The innovative OPS needs to be compared with a conventional outboard engine of the same power and that's where the project is at right now. If you are interested in learning more about participating, please contact me.

I would like to thank Abhishek Roy, who created the images of the Iruka concept with his team. Roy is the founder and owner of Lunatic Koncepts, a design lab based in Mumbai, India. Abhishek's team also created the renderings for the Vigilente trike, the Yeti Artic hovercraft and the Alert airship. I would also like to thank all the students who are currently working on the Iruka concept including Simon Poirier, Maxime Dupras, Étienne Gagnon, Antoine Véla, Joey Gobeil, and many others.

Live downtown and at sea all at the same time with this new concept
February 2, 2015 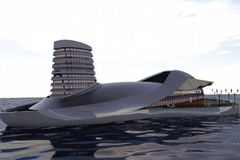 Self-driving armoured vehicle to extract wounded soldiers and save lives
April 18, 2015
Cut the cost of ambulance trips with a new type of vehicle
April 1, 2015 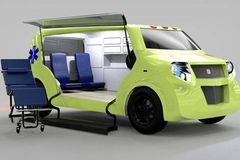