To study surfboards, Southern California – that vast golden laboratory of waves, dude culture and artfully contoured fibreglass – is the place. But to learn about winter tires, the frozen expanse of northern Finland is ground zero.

Located here may be the coldest, most exotic testing centre on the planet: the Nokian Tire facility – known in the business as White Hell.

The temperature is -23 C, and the trees are frosted permanently white, as if part of a gigantic Santa Claus set. It's an arctic tableau of snow-covered hills, reindeer-filled forests and lakes frozen to the consistency of cast iron.

This is winter-tire nirvana. Inside a heated garage facility are professional winter-tire test driver Petri Paananen and Nokian engineer Matti Morri. The rooms are filled with test cars and tires, each racked and labelled with a computer code.

There's more to making a winter tire than you might imagine. Morri talked about rubber compounds, tread patterns and tire profiles – it's like talking computers with Steve Jobs. Paananen and I head out in a specially equipped Audi to test a set of prototype tires constructed with five different types of rubber and high-tech aluminum and carbide studs. The grip is impressive – we circle a frozen skid pad at 140 km/h, and climb a snow-covered hill as if it were made of Velcro.

Next up is the handling course – a twisting, snow-packed road that runs through the forest like a bobsled track. The speedometer flickers up into the 150 km/h range as Paananen slides the Audi through the curves.

I've ridden with some great drivers, including four-time F1 champion Sebastian Vettel, but the ride with Paananen is something else again – he is a master of low-traction physics. As the car slews toward a giant tree, Paananen calmly studies how much pressure he is applying through the wheel, as if he were a scientist reading a laboratory instrument instead of a man hurtling toward a major collision.

"We do this every day," Paananen says. "You learn how to feel the tires when you're pushing them. That's the job."

Paananen is part of an elite team of test drivers who specialize in winter-tire performance analysis. The job demands driving skill and cool-headed scientific evaluation – drivers must be able to describe and score a long list of complex, interdependent performance qualities, like a wine connoisseur deciphering the notes of a fine vintage.

It also takes sheer nerve – as part of the test program for the Hakkapeliitta 8 studded tire, Nokian test driver Janne Laitinen hit 335 km/h on the frozen Baltic Sea, hurtling down a narrow, rutted ice track plowed through the snow. "I had to focus," he says, a masterpiece of understatement.

Every year, Nokian makes about 5,000 different winter-tire prototypes. Each is subjected to a series of tests. At Ivalo's White Hell centre, sensors measure everything from braking distance to air temperature to sidewall deflection. But then comes the part that only humans can measure.

On the test track, I experiment with different tires to see which ones work best. There are high-speed curves, patches with mixed traction, an icy slalom course and a giant, solid-ice straightaway to test braking and cornering force.

Here, all the tire-construction theories come into focus. The clear winner is the Hakkapeliitta 8, a tire that epitomizes winter performance. It has a soft rubber tread compound that stays pliable in the cold, and hundreds of tread blocks and finely cut channels that help carry away slush and bite onto slippery surfaces. And the Hakkapeliitta 8 has the winter-tire secret weapon: studs.

Nothing else works as well on snow and ice as studs, and these are state-of-the-art. Constructed from aluminum and carbide, the studs are mounted on an inner cushioning layer that absorbs the impact when they strike the road.

Next up is the Hakkapeliitta R2, similar to the 8, but without studs. On snow and ice, the R2s feels almost as good. But there is a measurable performance difference. In a series of braking tests on glare ice from 100 km/h, the R2s takes 87 metres to stop – the Hakkapeliitta 8s only takes 77.

The next tire is labelled "all-weather." This is a category that many drivers have never heard of, but is becoming more popular. It qualifies as a winter tire, but is designed to work year-round. It takes nearly 98 metres to stop – nearly 30-per-cent longer than the studded Hakkapeliitta 8s.

Even so, the all-weather tires are markedly superior to the tires that millions of Canadians drive on – the miserable all-season, which many professionals refer to as the "no-season tire" because it's terrible in the cold and mediocre the rest of the time.

The all-season tire's performance on ice, snow and cold pavement is deeply substandard: Turning grip is limited, and stopping distances can be two or three times worse than with a dedicated winter tire.

After Ivalo, the next stop is Nokia, a Finnish town 1,000 kilometres to the south. Nokia is famous for cellphones and the invention of the winter tire in 1934. The Nokian Tire factory has been expanded and updated since then, and it combines high-tech with history: You walk past old brick walls into a factory filled with robotized machines.

It's amazing at how much goes into the tire manufacturing process: Giant spools of rubber, fabric and steel are wound together in mind-boggling concoctions. Multimillion-dollar segmented moulds with filigreed tread designs hiss down, and tires spin on polished steel mandrels like black jewellery. Workers rode through the factory on bicycles – the place was huge.

An hour later, I am in one of the most secretive parts of the plant: the laboratory where scientists experiment with ways to build tires. Lab assistants pore over equipment reminiscent of a genome project, and the rooms fill with a soft chemical odour: Strips of experimental rubber are being vulcanized in a giant oven. Nearby, a series of machines test samples: One forms rubber into cookie-sized disks, then torque them with an aluminum arm to measure how they store and release energy – a process known as hysteresis.

Head scientist Mika Lahtinen spends his days absorbed in the arcane chemistry that can make a tire better: He can alter the way a tire deflects as it goes down the road, and how much energy it stores in its tread blocks. He dreams up ways to realign polymers. Weird stuff. But scientists such as Lahtinen have created tires that stick to ice.

"We're up here reinventing the wheel," he says. "And we do it every day."

In pictures: Testing winter tires in White Hell Gallery
June 19, 2017
What you need to know when selecting new tires
June 5, 2017
A rare look at the process of making winter tires
May 12, 2018 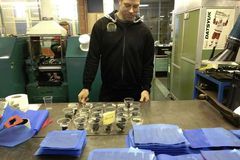