When Tony Mancina rents a car and buckles up, he notices parts of the car most people don’t, such as the location of the seat belts or the ergonomic design and ease of access for the cup holders.

“I have been on vacation and gotten into rental vehicles and said: ‘Wow, I can’t believe they actually sell this thing,’” said Mancina, director of Chrysler Canada engineering. “But I’ve been in some cars and thought, ‘That is nice, we should do that in our cars, too.’”

An average modern car has about 2,000 parts, making it a lot more than just an engine, four doors, seats and pedals. The vast majority of components go unnoticed unless there is a problem with the design or engineering. In Chrysler vehicles, seat belts feel comfortable to most drivers and passengers because Mancina’s team extensively tests seat belt positions and angles from the anchor points to fit from the fifth percentile woman to the 95th percentile male – or from drivers between five feet to 6-foot-3.

“A customer may take for granted that a seat belt is comfortable and in the right location, but we get into those specific items,” he said during a tour of the facility.

In photos: Inside Fiat-Chrysler's advanced research facility in Windsor

Mancina runs the Automotive Research and Development Centre in Windsor, a 205,000-square-foot facility that opened in 1996. Chrysler has spent $600-million on the plant over the past 19 years.

In addition to seat belt placement, engineers and technicians test headlight angles in a tunnel as long as a football field. The strength of steering columns is tested with constantly moving robot arms. Structural toughness and suspension durability are tested on hydraulic rack systems that twist the car and simulate the repeated impact of large potholes. Then there’s the corrosion test, which compresses ten years of use into a 24-week test where the vehicle is driven, sprayed with salt, and subjected to unusually humid or dry conditions in an environmental chamber. Engineers test spoiler angles to optimize handling and fuel economy, and create new methods for applying paint, because saving even a few milliliters per car can add up to major savings.

“We dive into the very fine details of any component or vehicle element...We try to identify and engineer all of the issues or opportunities we can find on the vehicle so the customer has the best experience possible.”
Tony Mancina

When FCA brought the Fiat 500 to North America, Mancina said his group designed the location of the cup holders, because the European model didn’t come with them. They had to figure out the best ergonomic location for occupants to place and retrieve their cups while driving. Sounds simple, but if you had to stretch too far, you’d notice

Many of the tests are related to durability, to know when parts will fail. In one room, tiny robot arms pull a steering wheel every few seconds, others move a shifter. In another, the wheels are taken off and the car is hooked up to larger robot arms that toss and turn the car. And in yet another room, all four shocks are constantly pumped as if a street were filled with deep potholes. It is mesmerizing and hypnotic to watch. 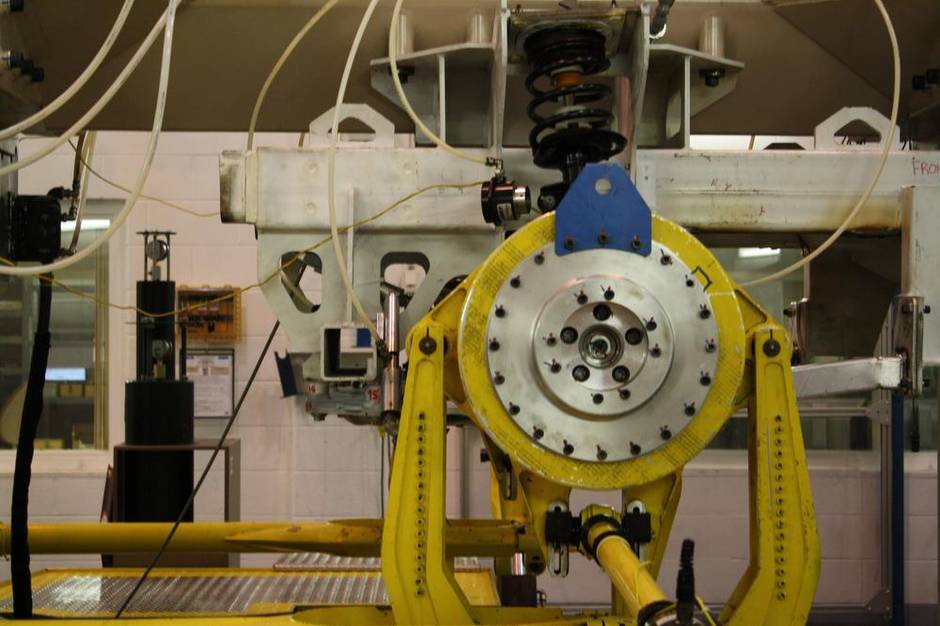 “We develop severe tests; sometimes, those tests are to complete fatigue or failure and we measure the degree of failure and when we talk about failure it is never to the extent the customer would experience,” he said. “We try to eliminate the non events. The non events include when you are driving on the smooth surface of any type of road … we’re more interested in the potholes, the broken roads, the very extreme turning conditions.”

A small robot arm tugs on the wheel every few seconds to display in a matter of weeks the same pressure that may be applied to the wheel in a decade. The idea is to learn what the component is capable of and how it can be improved.

Mancina and his team are also concerned with what happens to the car after it has completely died. Even though the car may no longer be roadworthy, it has value in parts.

“We have to determine from a recyclability content, how long does it take to tear down,” he said. They take every single one of the more than 2,000 components off the car, timing the process and analyzing the wear on each part to see what an aftermarket recycler could sell. “We really want to make sure as much of the vehicle is recyclable as possible.”

“The one thing that I notice when I get into all of our products is the impact this facility has had on various elements of that particular vehicle,” he said.

“I know that seat belt, those designs, that location was done here. I know that steering column, the robustness of that design, we did that. It gives you a real sense of pride.”