Can a company known for making vacuum cleaners build an electric car that doesn't suck?

The tongue-in-cheek question has been circulating since Dyson's announcement last month that it is working on an electric car. The privately owned British company – which sells high-end vacuum cleaners, home cooling fans and hair dryers – plans to have what it calls a "battery electric vehicle" on the road by 2020, with at least £2-billion ($3.2-billion) and 400 staff dedicated to the endeavour.

The company believes its outsider status is an advantage, since it will be able to design a car from the ground up without any prior biases. Dyson plans to do all development in-house.

Its secret weapon could be solid-state batteries – rechargeable power sources that are smaller and potentially more durable than the standard lithium-ion kinds found in many consumer electronics, including other electric vehicles.

Solid-state batteries may be of particular interest in northern countries, including Canada, because they promise better performance in cold weather. The batteries replace the liquid or gel electrolytes found between electrodes with a solid, crystalline electrolyte. Without liquids, they're also purportedly safer and recharge faster.

Dyson in 2015 acquired Sakti3, a spin-out firm from the University of Michigan, for $15-million (U.S.) to gain a foothold in solid-state research. The company vowed secrecy going forward in announcing its car project last month, citing a fiercely competitive market, but founder and chief inventor Sir James Dyson does believe solid-state batteries will give him an edge in a host of products.

"I'm not making any great claims, but we want to be right in there. We'd love to be first, but we're making sure we'll have our own battery and that it's a quantum leap," he said in an interview last fall. "We're very well positioned to put that kind of battery into production."

Industry analysts are mixed on the company's chances. Some agree that its outsider status is indeed a boon, but others see it as a disadvantage.

Jeremy Howells, professor of innovation of the Kent Business School at the University of Kent, says Dyson has "patient capital," in that it doesn't have to answer to shareholders. The company can take as long as it wants – and spend as much as it wants – to make projects happen. Sir James himself also has a strong track record of disrupting and revolutionizing other markets.

"If James Dyson is interested in it, he'll put the resources into it because he still really dominates the company," Howells says. "Dyson himself has had a long-term interest in batteries because they're really at the core of his products. He's pretty geeky about it and knows it's a technology the company needs to master."

Dyson is also certainly looking to add the technology to its other products and may be aiming to take a similar path to Tesla, where it could eventually make batteries that power homes.

"Longer term it might tie up in what they're trying to do," Howells says. The company also isn't alone in pursuing solid-state batteries. Toyota earlier this year announced that it is close to a production breakthrough and that it could put the technology into vehicles by 2020, the same timeline target as Dyson.

But some observers are skeptical. Olivier Trescases, associate professor in the electrical and computer engineering department at University of Toronto, says it's still early days for solid-state batteries.

While the technology is credible and well-reviewed on a scientific level, it will inevitably be more expensive and therefore less practical to use than standard lithium-ion for some time.

"It's hard to imagine anything that would displace current lithium technology, just based on the decades of cost scaling there," he says. "[Dyson] may release an EV with other batteries [first]. I think that's very, very likely. I really don't see that in two or three years."

The company will also have to overcome big barriers in entering an auto market that is notoriously difficult for newcomers to crack. Traditional auto makers are entrenched with vastly superior resources, distribution networks and retail presence.

The shift to electric vehicles is creating opportunities for newcomers such as Dyson, but Trescases doesn't believe they'll have a chance – especially in North America – without help from governments and regulators.

"It's opening the door, but it doesn't mean that anybody can get in," he says. 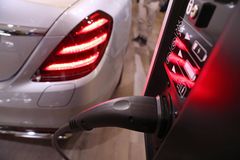 Take a peek at buzz-worthy electric and gas-powered vehicles at Frankfurt​
November 12, 2017 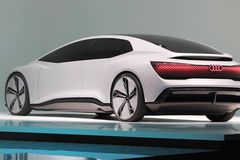