Hell hath no fury like a driver who believes he has been wronged.

Of course, hell also hath no fury like a cyclist who believes she has been wronged.

Especially when both sides believe they're doing the right thing and are therefore untouchable, irreproachable, and entitled to lecture on the subject of road safety.

"I think probably a big underlying issue – in my personal experience – is just a general lack of consideration for other road users, from both sides, and from pedestrians too, actually," says Toronto Police Staff Sergeant James Hogan. He manages the CRU (Community Response Unit) at 14 Division where "all the bike riders work."

Hogan, who rides to work and has pictures of wrestler Hulk Hogan taped to his office door, seems to be as perfectly non-partisan on the bikes versus cars issue as you'd hope from someone policing Toronto's polarized streets. "I've seen both, anger from both sides," he says.

As bike lanes and cycling infrastructure evolve for the better, so do the rules that drivers and cyclists must follow. It doesn't help that there's not one comprehensive guide for road users on how to share the space.

The city's roads weren't designed with cyclists in mind, and what there is now is an imperfect patchwork solution. The roads aren't getting any bigger, so cyclists and drivers will need to get better at sharing.

What are the most important things cyclists and drivers can do now for each other out on the roads?

Cyclists are entitled to ride one metre out from the curb. But they often ride closer, even though it's harder and more dangerous.

"I find myself practically banging my pedals off the curb – and the pavement's really in rough shape there, sewer grates and all sorts of things – because I'm just not interested in taking the lane, or even the metre that I'm entitled to, and being abused for 20 minutes," Hogan says. "Very few motorists make it easy for you to do what is actually the most sensible thing. It's a struggle."

Cyclists should be more assertive about taking that space, he suggested, and drivers should let them. This means sometimes cars will have to wait behind bicycles until it's safe to pass.

"I think motorists could realize that it's actually kind of hard work cycling, and maybe have some consideration for what it's like to be exposed out there," Hogan says.

In any incident with a vehicle, cyclists are the most vulnerable party. Because of that, Hogan says most cyclists are pretty accommodating. Riding in a straight line is safer, but cyclists will hug the side of the road, zigging around parked cars and snow and garbage to make more space.

"It's dangerous for them, it makes it hard for drivers to predict what they're going to do," he says. "I think drivers get fearful of cyclists because cyclists are less predictable. There's a greater range in what they can do [compared with cars]. And when people are fearful, then they get angry right? Cyclist does something [drivers] don't expect, then they lean on the horn or yell at them. And sometimes it's just fear. It's like, 'Oh I almost hit you you idiot!'"

Cyclists and drivers both. Signalling turns is about more than just obeying the law. Signalling "shows everyone that you're mindful, that you know there are other people out there that might be affected by you," Hogan says. "That lets everyone else know you're paying attention, which lets them know they can rely on you not to do something strange."

Information for drivers and cyclists on how to properly share the road is scattered. There's a bit about cyclists and bike lanes in the Ontario Driver's Handbook. There's more information in a City of Toronto pamphlet "Understanding Bike Lanes." The city also has a web page about cycling and Cycle Toronto offers a handy guide, too. 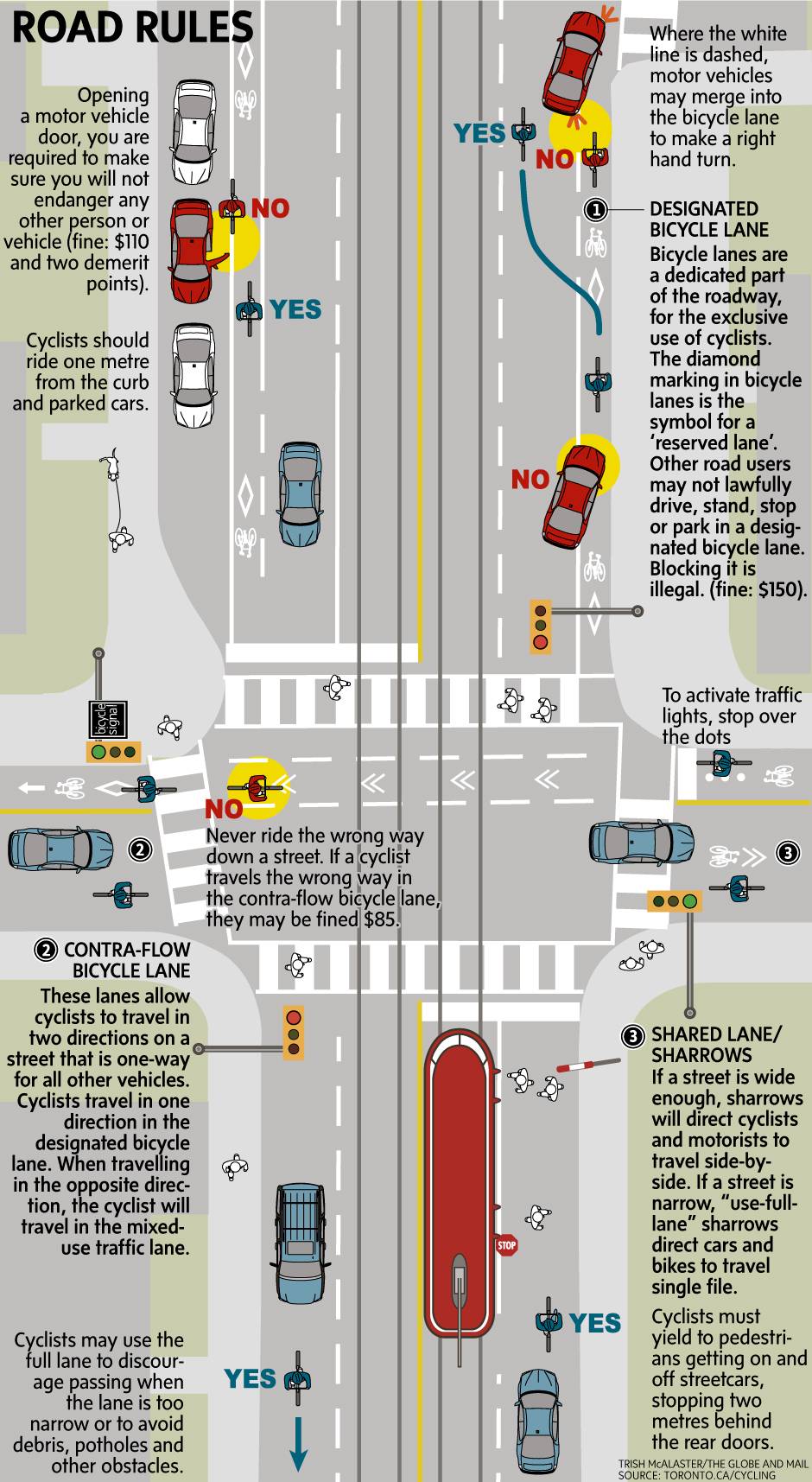