MICHAEL BETTENCOURT
Special to The Globe and Mail
Published October 31, 2012 Updated May 9, 2018

Piling 19 grand worth of options on to Cadillac's entry-level ATS sport sedan was a brave move, given that pricier cars tend to fare worse in AJAC testing, but what it did was make the interior of the lightly optioned BMW 328xi xDrive tested against the ATS seem as bare as the first leaf-less tree on the block. But it proved to be a successful strategy, as the Caddy's greater array of interior features and shorter emergency stopping distances helped nudge its final score ahead of the BMW.

It was a tight race, with the ATS finishing with 660 points, a mere four more than the all-wheel-drive BMW 328i, closely followed by the Lexus GS 350 a further five points back.

The Caddy impressed many testers with its fine handling, quality interior materials and impressive power from its 3.6-litre V-6, the largest and most powerful engine in this group, at 321 hp. The ATS felt peppier than the BMW but surprisingly, the four-cylinder 328i posted a faster 0-100 km/h time, thanks to its turbocharged mill, lighter weight and all-wheel-drive's grip off the line. The ATS responded though with a better 80-120 km/h time, a more realistic benchmark for how spritely a car feels.

There are a few quibbles for buyers to look out for. Its CUE multi-media system takes time to learn, and the trunk is the smallest in this group by far. But the ATS deserves to change many buyers' perceptions of Cadillac, as the ATS is arguably in the upper performance echelon of its sport sedan class.

The basic 328i xDrive that BMW chose to enter into this class felt slightly lighter on its feet than the Cadillac, with more immediate responses to steering and throttle inputs, and did well in the fuel economy ratings, too. Its as-tested price undercut the Caddy's by $4,345, but hurt it in the luxury and safety features areas.

With high styling marks plus a sophisticated interior, the rear-wheel-drive GS 350's handling prowess on the airport runway deftly demonstrated its impressive all-around comfort and performance capabilities. It seamlessly glides between one extreme to the other, with a Sport and extra Sport Plus mode, plus sporting shift paddles. But its price, the highest in the category, and weak safety features score didn't help.

Fine interior materials, roominess and smoothness at all speeds gave the Lexus ES 350 plenty of points in the key comfort categories. However, its emphasis on pampering hurts it on the dynamics side, plus its $51,750 as-tested price raised some eyebrows for being more expensive than the BMW and only $7,200 less than its GS big brother.

Ho-hum styling inside and out cost the compact Buick Verano points in this style-conscious class, while its emphasis on pampering luxury also hurt the entry-level Buick in the performance department. It did score fine marks in refinement, its turbocharged four-cylinder engine rivalling the BMW's similar layout for smoothness and power.

The Acura lined up with the Buick similar to how the Caddy did to the BMW, the American just finishing ahead of its off-shore rival. With a relatively loud engine and the least amount of power by far, the Acura's Civic roots show a little too clearly through its upscale clothes to compete on all but price in this class. 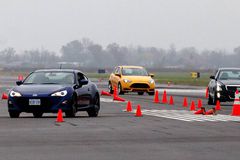 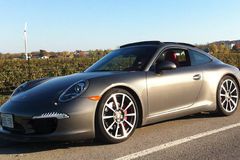 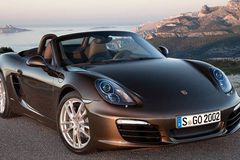