In hindsight, it's hard not to see Luc Donckerwolke's words as an omen, a warning for fellow car designers.

"We're breathing the same oxygen over and over again," he said in Geneva, speaking about the automotive design industry. "We are actually tending not to look in other fields. ... That's the worst mistake you can do. Without contrasting what we're doing with other fields, we will bore people."

At the time, Donckerwolke was Bentley's chief designer.

A few weeks after our conversation in the spring, he took to Facebook to call out a Lincoln concept for what he felt was a copycat design.

This is the Flying Spur

And this is the Continental

Then, in early June, Donckerwolke left Bentley and Volkswagen Group where he worked for the past 24 years. In that time, he'd designed Audis, Skodas, SEATs, and shaped Lamborghini's modern look while leading its design department. No reason was given for his departure.

In hindsight, we should've seen it coming. Back in Geneva, Donckerwolke said, "I'm a bit worried. When is the reset necessary?"

Lounging in a back room at Bentley's booth, Donckerwolke pointed to my iPhone. "This is the great thing. When this thing happened in the market, somebody didn't think the same way. Somebody thought outside the box. And it's not easy. Car designers tend to stay in a closed environment."

Indeed, it may be up to outsiders like Apple, Google and Tesla to inject new ideas into the automotive industry.

Both Google and Apple have built in-car interfaces for smartphones that could eventually evolve into complete connectivity and infotainment systems. Google has its self-driving car project, while Apple is also rumoured to be working on its own mystery car project, although what exactly it is, is anybody's guess.

Tesla has promised to roll out limited semi-autonomous driving capability with an upcoming software update for its Model S.

But big auto makers aren't out of ideas yet. Audi, Mercedes-Benz, Lexus and BMW all have some sort of autonomous car in the works. While the technology and, more crucially, the legislation for sci-fi style RoboCars is still lacking, big auto makers are rolling out these features in baby steps: cars that can find parking spaces, cars you can talk to, cars that can pull out of your garage by themselves, cars that detect and avoid collisions without driver input.

With the G7 nations agreeing to phase out the use of fossil fuels by 2100, the need for alternative powertrains will only increase — and that's a good thing for designers. It presents opportunities to create new shapes. Electric motors are smaller and easier to package than internal-combustion engines. Battery packs, while heavy, can be hidden under the floor (Telsa) or in the transmission tunnel (BMW i8) or behind the passengers (McLaren).

"Our kids will consume cars in a different way than we are," Donkcerwolke said in Geneva. "So we [the auto industry] have to evolve. And that has to start in the design department. You can't just re-package old stuff all the time."

"We're talking about mobility. It's not about car design. It's about the general thinking of how are we going to interact with our environment. We cannot just carry on spending five hours on the freeway trying to go somewhere because we need to have a meeting. It's bad for everybody: for ourselves, for the environment, for everybody. That has to be rethought. And when we rethink that, there will be a different approach to design."

"There will be no need to have different multi-coloured boxes, when we are all, let's say, in an autonomous context."

Luc Donckerwolke is talking about nothing less than a coming revolution. Watch for it. 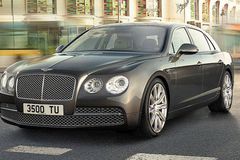 How the new Mercedes went from blank piece of paper to finished car
July 7, 2015
Inside a Canadian facility where engineers design car parts most people never think about
April 16, 2015
Follow us on Twitter @globeandmail Opens in a new window
Report an error Editorial code of conduct
Due to technical reasons, we have temporarily removed commenting from our articles. We hope to have this fixed soon. Thank you for your patience. If you are looking to give feedback on our new site, please send it along to feedback@globeandmail.com. If you want to write a letter to the editor, please forward to letters@globeandmail.com.
Comments