Gravity’s gonna do all the work now. The $266,000 Bentley SUV formerly under my control picks up momentum and slides sideways down a wall of sand. The 2.5-tonne truck is falling at a 45-degree angle down and across the face of a dune. Gravity has full control.

Suddenly facing the real possibility that I may be about to wreck the world’s most expensive SUV – to flip and roll this Bentley like a barrel going over Niagara Falls – I panic. Naturally.

Steering does nothing. Accelerating would only give more power over to gravity, thereby making an even bigger crater in the Imperial Sand Dunes Recreation Area. Nothing to be done except brace for impact. But it never comes. “Full power, full power” my co-driver, an expert off-roader, says calmly as we reach the bottom of the dune. The Bentley power-slides out of trouble in a cloud of sand. This Bentayga, Bentley’s first SUV, lives to fight another day. 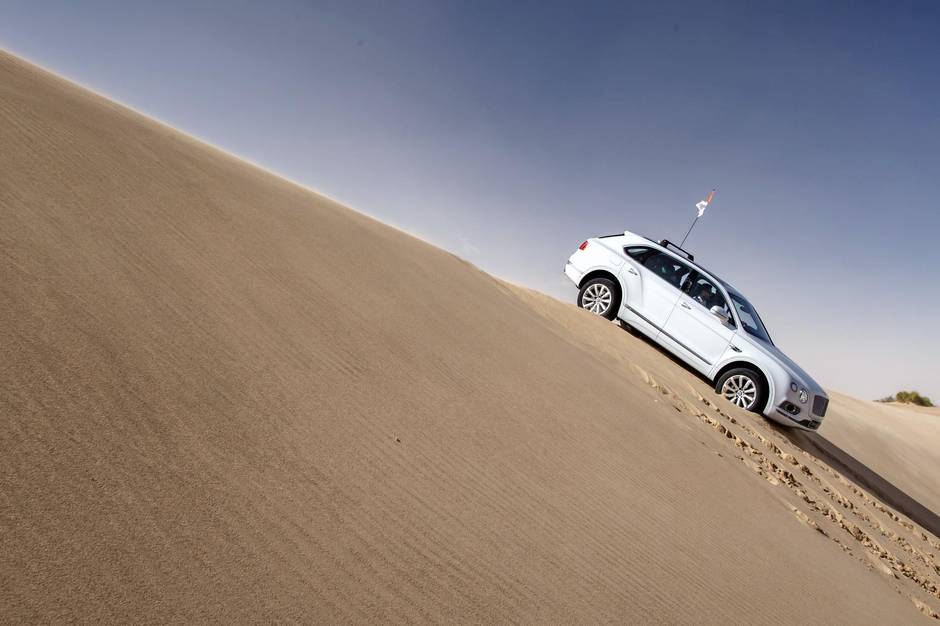 This is a pastime called Dune Surfing, as Jürgen Kern explains later, the delicate art of driving/falling down a sand dune in some type of highly modified off-road vehicle. It’s not something many customers will do with their SUVs, but some will, Kern says, especially customers in the Middle East.

Kern is confident in the Bentayga’s dune surfing prowess. During the vehicle’s development, he and some other engineers took it to Dubai and Oman to surf the most notorious dunes in the world: Big Red and Devil’s Plunge. A few members of Bentley’s board of management joined them. Kern, the team’s resident off-road expert and veteran of the Trans-Siberian rally, led the expedition.

The dunes in Dubai make what I just survived in California look like a sand castle. Temperatures there get up around 40C or 50C. The rusted carcasses of cars that never made it out litter the dunes, half submerged in sand. But you can’t beat a 600-horsepower, twin-turbocharged, 6.0-litre, 12-cylinder engine with 664 lb-ft of torque when it comes to dune surfing. On the road, it means this Bentley’s good for 301 km/h and goes from 0-100 faster than a Porsche 911 Carrera S. On the sand, it can muscle up a 300-foot dune, no problem. 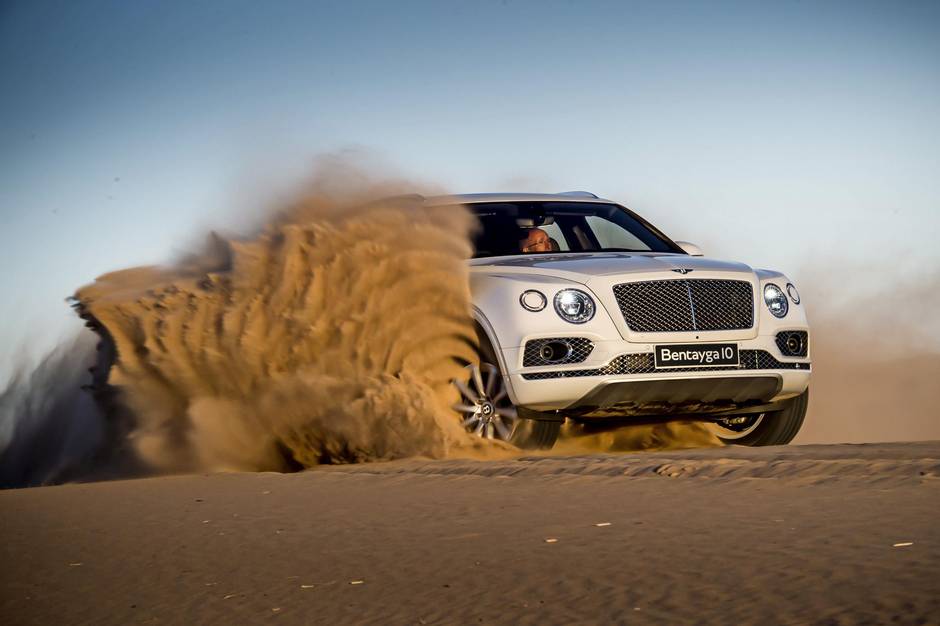 The Bentayga is a crucial part of making Bentley a self-sustaining part of the Volkswagen Group empire. As Wolfgang Dürheimer, chairman and CEO of Bentley, said before our drive, the Bentayga alone will increase Bentley sales by 50 per cent, from 10,000 vehicles per year to 15,000. Self-sustaining means a goal 20,000 by 2025. To make up the difference, Bentley is also working on a new sporty coupe based on the EXP 10 Speed 6 concept car and a smaller, sportier SUV that could start at a slightly lower price point than the Bentayga.

“The Bentayga is as you say, a no brainer,” Durheimer said. “It’s an SUV. People will like it.” Already he’s predicting 2016 will be Bentley’s most successful year ever. Demand for the new SUV is far outstripping supply. If a customer walks into a dealer now, they might be waiting a year for delivery, he said.

Related: Queen Elizabeth to be first owner of Bentayga

It’s not a good-looking machine. It’s awkward from some angles, not regal or imposing like a Mulsanne or even a Range Rover LWB. The Bentayga would benefit from a longer wheelbase to give it the right proportions, but it’s confined to the rough dimension of the Audi Q7/Porsche Cayenne platform. Honestly though, it doesn’t matter. Say “Bentley SUV” and you’ll have carte blanche to raid the chequebooks of the world’s wealthiest drivers.

Bentley developed the Bentayga to push into new markets for the brand, to appeal to buyers in Russia, the Middle East, China and South Korea, as well as North America and Europe. Bentley’s building new dealerships in Vietnam, Morocco and Dubai. 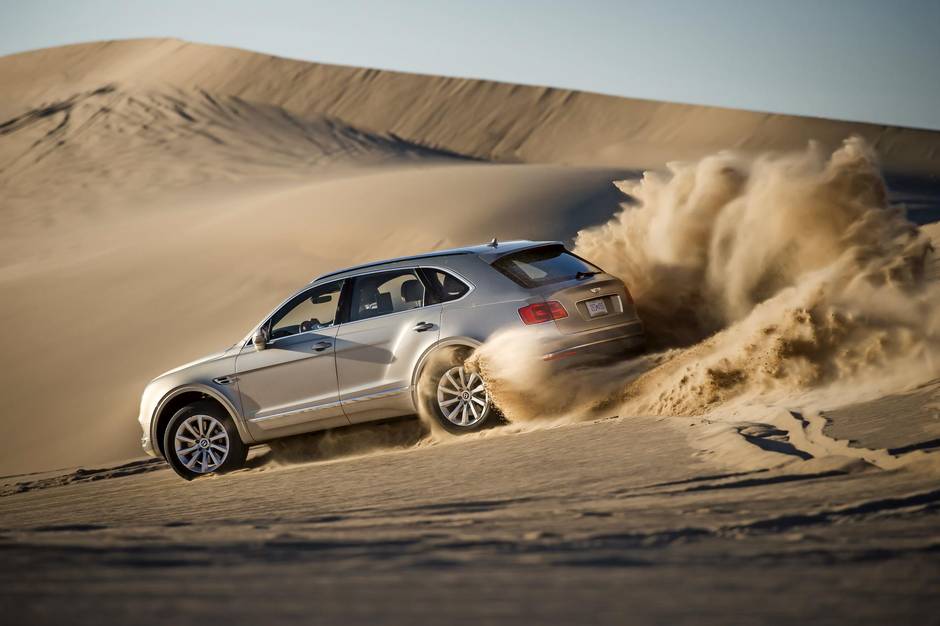 This is the reason we’ve taken the Bentayga dune surfing. And why, during testing, Kern and his team drove from the southern tip of Africa to the top of Norway. It’s built to survive anywhere, while keeping its occupants coddled and isolated amid a forest of wood and cowhide.

From the Imperial Sand Dunes, we board a helicopter which, despite its leather seats, suddenly feels cheap and noisy in comparison to the SUV. We rendezvous with our Bentayga back in Palm Springs where it must still endure two feats of strength: a muddy off-road course and a few laps of the Chuckwalla Valley race track.

On the Pines to Palms Highway – one of the best roads in Southern California – the Bentley SUV is, for the most part, like any Bentley sedan. The one surprise is that the SUV doesn’t feel soggy or rotund – the chassis is always perfectly composed, even if the steering is a bit vague. It builds speed like a cannonball out of corners. But the cabin stays flat, thanks to some clever active anti-roll bars powered by a 48V electric system. It’s eerie how well it works to defy physics.

The W-12 engine might as well be a nuclear reactor for all the noise it makes. The automatic gearbox has eight speeds, but the motor feels like it really only needs four. The $5,680 Naim stereo with its 18-speakers and 1800-watts sounds massive, and I want one badly in my living room.

Predictably, the Bentayga has no problems in mud or at the race track.

The options list reads like the catalogue at a Bonhams art sale. Line items include a $33,000 picnic set with crystal champagne flutes, a $34,000 satin paint job, a $7,000 set of 22-inch wheels, but the pièce de résistance – the thing that breaks new ground in the quest to delight the ultra-rich – is a dashboard-mounted tourbillon clock made by Breitling for Bentley. They only make four per year, and ticking that option box will add €150,000 (they’re only priced in Euros) to the final cost. You can have the clock in gold or platinum or whatever other shiny thing pleases you the most. 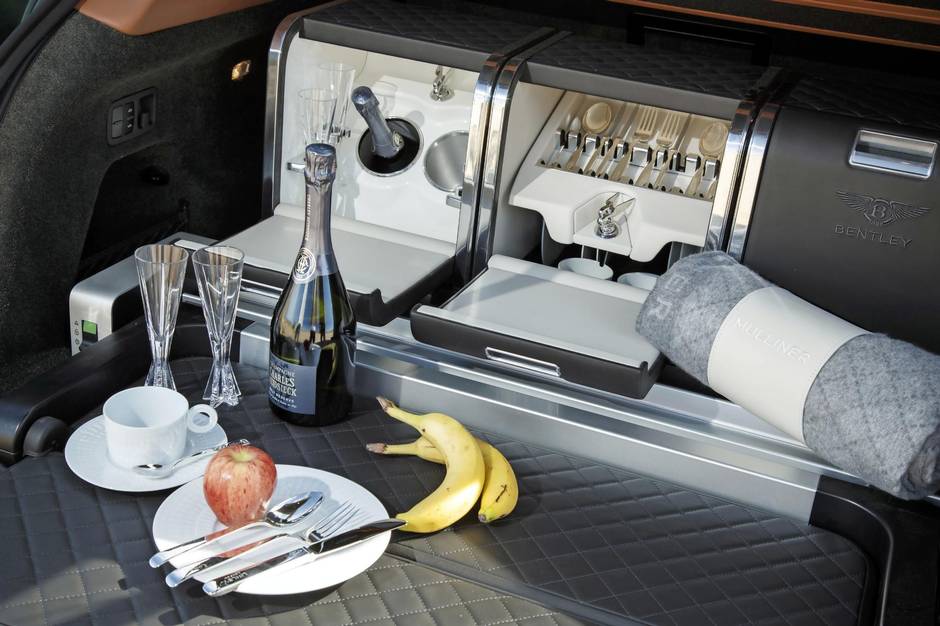 A Scotsman from Bentayga’s development team proudly stated that it takes more lines of code to run this car than it does to fly Boeing’s new 787 Dreamliner.

The Bentley Bentagya experience is as glorious as it is gluttonous, proof positive the gap between the ultra-rich and the rest is widening in the automotive world, too. The Bentayga is just the first in a new class of deluxe SUVs. Maserati and Lamborghini are each working on one of their own. Today the Bentley is the uncontested fastest and most expensive SUV in the world.

Related: Why ultra-luxury brands are getting into the SUV game

Back at the Imperial Dunes, a stranger in a buggy with a large American flag flying proud above its roof roars across the horizon before popping a wheelie. His all-black dune buggy is gorgeous. Mint condition. It has a nitro injected V-8 from a Corvette, the driver says. He knows about the Bentayga; back home he’d been invited to a preview of the car. The flagpole on the roof was lit up with blue LED lights, and on the back of the buggy it says “Smokin’.” It was a Monday morning. “This is real one-per center stuff here!” he said gleefully, before popping another wheelie. 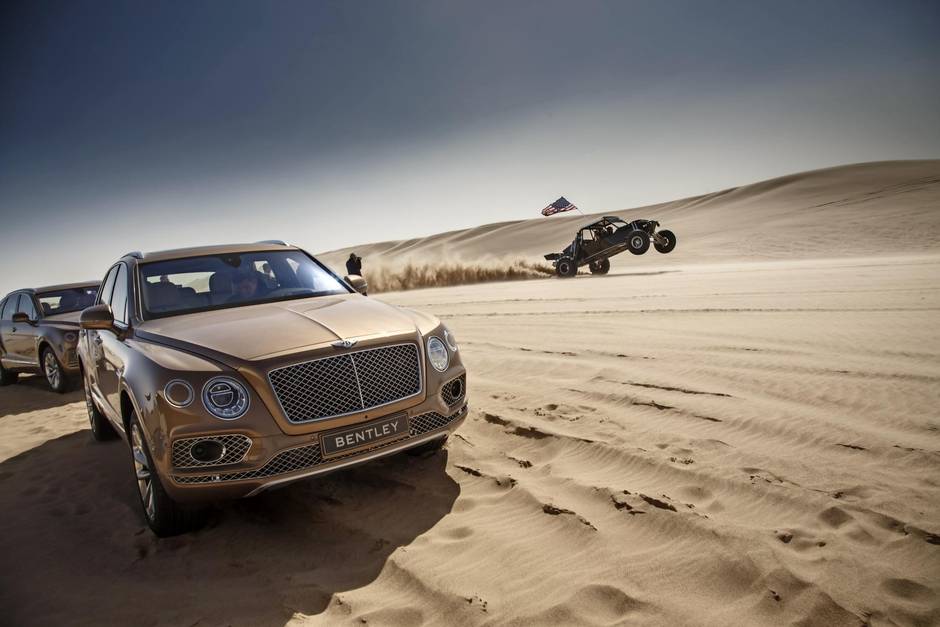