In any other country, this would be just another car launch. After all, mass-market compact sedans are a dime a dozen, and every five or so years each gets a redesign. And now, it's the Honda Civic's turn – so what's the big deal?

It's not as if the Civic is the world's top-selling compact, let alone the top-selling car. In most major markets, it doesn't crack the Top 20. Heck, Honda no longer even sells the Civic in Japan, its home market.

In Canada, however, the Civic is huge. Honda Canada calls its owner base Civic Nation.

Since 1988, 4.5 million Civics have been built in this country – one in eight of all the 35 million Civics built globally since 1973. And the Civic is on track to make 2015 its 18th consecutive year as Canada's top-selling passenger car, a run that began in 1998 when, as reported by Canadian Auto World magazine, the "Honda Civic didn't just remove Chev Cavalier from its car-sales leadership throne – it kicked the Chev right out of the room."

To put that in perspective, last year the Civic – one of nine nameplates in Honda's Canadian portfolio – accounted for 43 per cent of the brand's total sales here. In the United States, where mid-size sedans outsell compacts, the Civic last year ranked fourth in overall car sales and its share of the Honda total was only 24 per cent.

How did the Civic achieve its Canadian break-out? In 1998, it was midway through its sixth generation – a generation that arguably was the first of the more mature, conservative Civics, following five previous generations of whiz-kid cars that were perhaps too boldly styled and technically advanced to have broad mainstream appeal.

And, says Honda Canada senior product planner Hayato Mori, 1998 coincided with a mid-cycle freshening that introduced a new emphasis on value. Additionally, the Civic was so well rounded – like a decathlete, says Mori; not a superstar at any one thing, but good at everything – and it kept accumulating customers.

Throw in high owner loyalty – "bulletproof" and "Honda" are words that frequently co-exist in the same sentence – and the snowball effect kept the Civic on top year after year, despite periodic challenges from the Toyota Corolla, Mazda3 and Hyundai Elantra.

Still, nothing lasts forever. Early reviews of the 2012-2015 ninth generation were lukewarm at best. Reportedly, development of the car had been disrupted by the 2008-2009 credit crisis, and Honda scaled back its planned investment in the redesign. Perhaps, then, Honda is making up lost ground when it tells us the 10th generation is the most comprehensively new Civic since the 1973 pioneer.

The 2016 also features a new level of Canadian content. The Honda plant in Alliston, Ont., was the global lead plant for putting the new Civic into production – the first time that responsibility has been delegated to a plant outside Japan.

"Lead plant" doesn't just mean Alliston began building the 2016s first; it means Alliston developed the manufacturing equipment and processes that were taught to the eight other factories worldwide that make Civics. The significance of that role is deepened by the fact that the 2016 Civic is extensively new, including its base engine, which is also built in Alliston.

The 2016 Civic also reflects a new approach and attitude. Civics sold in Europe were significantly different from the North American versions, and on this side of the Atlantic "we lost the excitement and focused only on North American mass-market rivals like the Corolla," says North American development leader, Gary Evert. "We wanted to change that and build the best compact car in the world."

With a focus on elevating the car's dynamics, the engineering team bench-marked the best compacts in Europe, including premium compacts like the Audi A3.

The new architecture was developed by Honda's U.S. operation, but will be the same in all markets, and will include future coupe and five-door hatchback body styles, as well as Si and Type R go-faster versions (the latter – which for the first time is coming to Canada – is a rabid pocket-rocket). Additional variants will be rolled out over the next 18 months.

Yet to be determined is whether the North American Type R will be based, like previous other-market versions, on the still-to-be-revealed hatchback, or on the sort-of-revealed coupe, which was the basis of the "concept car" teaser at the New York auto show last April.

Either way, Honda is bent on restoring its appeal to engaged, enthusiastic drivers. Meanwhile, it's likely the left-brain-motivated majority of Civic Nation will keep buying the cars regardless. Even in 2012, the first full year of the critically-dissed ninth generation, the Civic actually grew its share of the compact-car market. And it achieved the same share in 2014.

That said, the segment itself is steadily declining, as buyer tastes shift to compact CUVs. Honda sold 66,000 Civics in Canada last year, down from its peak of 72,500 in 2008. But Honda Canada won't be hurting if sales never get back to that level. Over the same period, Honda's compact CUV, the CR-V, almost doubled its sales, from 20,500 to 37,800.

A similar shift occurred in the United States, where most of Alliston's Civic production goes. By a happy coincidence, the other vehicle assembled at Alliston is the CR-V. 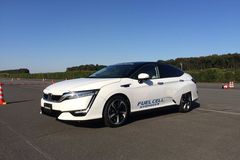 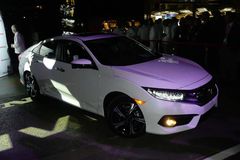