People stare at the i8. But not because it's a questionable fashion choice – which is often the case with exotic cars. No, they stare because it's like looking at an alien.

Where did it come from? Is it a Lamborghini? How much did it cost? How fast is it? Why isn't it making any noise?

Welcome to the future of cars. Things are about to get different.

The Frankfurt Motor Show is the stage for German automotive innovation. The i8 stole the show four years ago, and was on display again this year.

Inside the cabin, the smooth carbon-plastic pod envelops you. The interior is like a Zaha Hadid sketch, layers of curving lines. You reach up and pull down to close the up-swinging door. The car greets you with a cute chime as you press the starter button and … nothing. No great rumble from the engine, because there is no great engine: just a bunch of batteries and a little three-cylinder turbo similar to what you'd find in a Mini Cooper. And yet, the BMW i8 accelerates with instant, unstoppable urgency and flicks through corners like a kite in the wind. Turn the wheel and the car's low centre of gravity lets it slice through corners. Hit the brakes and there's an odd feeling through the pedal: that's the car harvesting the energy to recharge its batteries. And you never quite get used to that wall of electric torque, as it pushes you forward, silently.

It costs $150,000 in Canada, or about the same as a Porsche GT3 or Mercedes-AMG GT. With 475 and 503 horsepower, both comfortably outgun the i8's modest 362. Sports cars have always been about numbers, a simple game of who has the biggest stick. What was BMW thinking, building this alien machine?

Consider this: The best and most powerful steam locomotives were built just as something else was about to replace them. BMW is thinking ahead, to a future where sports cars – all cars, really – will have to be clean, and thrilling.

In 2007, Norbert Reithofer, then-CEO of BMW, repeated this lesson often to a hand-picked group of engineers, chosen for a skunk-works project meant to ready BMW for the future.

Reithofer would also remind them about Kodak. The company went bankrupt because it reacted awkwardly and hesitantly to change, remaining focused on a lucrative but dying business.

"He always said he didn't want to be the next Kodak," said Simon Ellgas. "He didn't want [BMW] to die with the best product in a segment that nobody needs any more."

Ellgas now works out of BMW's tiny office in Palo Alto, Calif., just down the road from Google's sprawling suburban offices. In 2008, he was one of those hand-picked engineers working in Munich on this secretive skunk-works project: Project i.

The aim was create a sustainable car from scratch: new concept, new materials, new construction. Consider the story of Project i as case study: a look at how the auto industry is reacting to climate change and regulatory pressure.

"Every smart person in this industry I've ever talked to agrees that we can't keep doing what we've been doing over the last century," Ellgas said. "We cannot just dig holes, wait for fossil fuel to spill out, burn it and be happy. That won't go on forever."

Forever, in this case, has a hard deadline: the year 2100. The G7 leaders agreed to "de-carbonize the global economy by the end of the century," as German Chancellor Angela Merkel said in June. Leading up to that date, governments are imposing ever-stricter CO2 limits on auto makers. We're already seeing the effect in dealership showrooms: plug-in hybrid SUVs will be all the rage for 2017.

For drivers, the question is when to make the switch. For car companies, the question is how to avoid becoming the next Kodak. How to switch from building gas-guzzlers, to hybrids, to plug-ins, to nobody-knows-what's-next, while maintaining profitability?

In an obscure red brick building on BMW's Munich campus, Ellgas and 20 or so engineers got to work on Project i.

Ulrich Kranz, the man in charge of the project, had the engineers improvise right from the beginning: they had to set up their own computers and meeting rooms. The setting was physically and psychologically so far removed from the order and process they were used to.

"None of us had seen Palo Alto then – it was probably a copy paste from Cupertino – but for us it was all new," Ellgas said. "It was as close as automotive production can get to a start-up atmosphere. It's a simple management strategy: If you want something different, you have to start different."

At this point, in 2008, the Project i team only knew it was building a "vehicle for urban private mobility using alternative drivetrain solutions." It also knew it wouldn't be hydrogen – BMW had been down that road before. Within six months, the team decided this new "Megacity Vehicle" would be an electric car with an aluminum chassis and carbon-fibre body.

It would be nearly a decade before that idea – what became the BMW i3, the brand's first all-electric car – arrived in Canadian dealerships. In the beginning, the team didn't even know it would also develop a sports car, the i8.

To understand just how radical a step these cars are, a look back at the last 100 years of car making is essential. They've always been built the same way: out of pressed steel, with internal combustion engines. But the i3 and i8 are made of a carbon-plastic passenger cell atop an aluminum cradle of batteries. No steel, no internal combustion. BMW didn't reinvent the wheel, but almost everything else.

Tesla had a similar idea, to put the batteries under the car. But not even Tesla went so far as to mass-produce a carbon-fibre reinforced plastic (CFRP) body to offset the weight of the batteries.

Elsewhere on BMW's Munich campus, a team of designers led by Benoit Jacob was figuring out what this radical new car should look like.

"It was a small group," said Daniel Hahn, who was among the first 10 or so designers on the project. "The studio atmosphere was great. We had music playing. We had a Nintendo Gamecube." His boss reported directly to BMW's top designer, Adrian van Hooydonk. "Things got done fast. We thought we were really cool."

Within a couple years, the i3 was taking shape. The styling team had gone from an initial model by designer Richard Kim – it was abstract, raw, made out of wood and recycled material – and turned it into something like a car. The board eventually chose Hahn's interior design to go forward into production.

In 2011, the i3 concept was unveiled to the public at the Frankfurt Motor Show. But it was its sister car, the i8 concept, that came as a bigger shock. It was like the i3, but lower, wider and longer, a 2+2 sports car with glass sides and dihedral doors – the first true sports car from BMW since the M1 in 1978. It stole the show.

"The i8 concept came out and everybody said you have to build it," said Ellgas. "The design and technology was so compelling, within a second, so convincing. It's not your brain, but your gut telling you want it – a highly emotional car, combined with high fuel efficiency. Everybody was on fire; we were so proud of having had the opportunity to work on that."

We've seen radical cars before, but they've always been trial balloons: a turbine-powered Jaguar, an electric Mini, an electric Mercedes SLS, and a stream of Audi e-tron concepts. North American sales of Toyota's hydrogen fuel-cell-based Mirai is limited to California buyers who pass an application and interview process.

But none of the established auto makers wanted to be first with something really different. Why gamble on the future when it's so uncertain and sales are at record highs? But BMW did. It put both the i3 and i8 into production. It was not out of the goodness of its corporate heart that it devoted so much time and money to develop low-carbon vehicles and production methods.

In a 2007 speech, Reithofer cited major changes he saw facing the industry, including "stricter regulatory conditions ... the public's increased environmental awareness and the debate concerning the acceptance of individual mobility in the future ... the limits of mobility in increasingly densely populated areas."

BMW has acknowledged that cars as everyone knows them might one day become obsolete, like the steam locomotive or film photography. Eight years later, Reithofer's predictions are truer than ever.

In Canada, the vast majority of buyers are new to BMW. Marc Belcourt, national manager for BMW i, says the i3 has a 90 per cent conquest rate compared to BMW's usual 60 per cent. This bodes well for the company's future.

And look elsewhere in BMW's product portfolio. Look at the just-announced 7-Series, BMW's flagship luxury sedan, and its "carbon core." In a segment first, its body includes many CFRP parts – the same lightweight material developed for the i3 and i8. The result is a 7 that's bigger than its predecessor, and yet lighter and more fuel efficient.

Look, too, at the hydrogen-powered i8 prototype that's been spotted in testing, and rumours that the next-generation M3 will be a plug-in hybrid. "I can assure you that we'll see significant growth in battery capacity, energy density – all at lower costs than today's batteries," said Ellgas. "It'll be constant growth. In 2025, electric cars will cover a very different range."

For drivers willing to try something new, it'll be an exciting ride.

Why the days of gas-powered cars are numbered
September 25, 2015 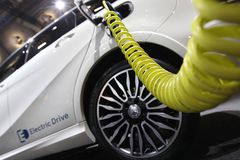 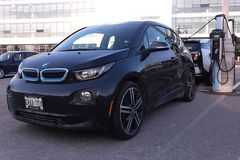 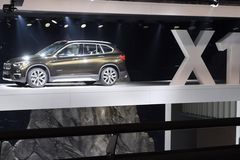