A pair of luxury SUVs that will battle it out for market supremacy in Canada was unveiled at the 2015 New York International Auto Show: The 2016 Lexus RX and the 2016 Mercedes-Benz GLE.

Both the Lexus – the fourth generation of this perennial class powerhouse – and the Mercedes – effectively the fourth generation of the ML class, but with a new name – have been around since 1997, meaning that this pairing has helped drive what is one of the hottest segments in the industry. Many North American consumers can't get enough luxury – especially in their crossovers and SUVs.

A slice of this segment that's tougher to explain is the crossover coupe – a vehicle with a sweeping roof-line that, as a result, puts more emphasis on the "sport" and less on the "utility." While it may seem an oxymoron to offer a utility vehicle that engineers out some of that utility, manufacturers continue to test the waters and battle each other for sales.

Now, neither the latest RX nor the new GLE unveiled in New York would be classified as a crossover coupe – but wait just a New York minute.

The RX has a coupe-inspired design element, a "floating" roof created by a blacked-out C-pillar and tapered metallic trim. This design feature gives the RX a sportier look without sacrificing rear-seat passenger headroom or interior volume. It's a conservative solution for the best-selling model in the Lexus lineup.

Mercedes has taken a different approach. The GLE is a sensible evolution of the outgoing ML, a traditional luxury SUV through and through. But the new line also includes a crossover coupe, the GLE Coupe, which was introduced at this year's Detroit auto show. This strategy mirrors that of BMW, which has, since 2008, offered the coupe-like X6 alongside the X5, both sharing a platform and countless other components.

"We are targeting a very specific brand [BMW], but I am pretty sure we are going to get more than just their customers," said Tim Reuss, president and CEO of Mercedes-Benz Canada, in New York. "We're going to get customers to the right and left who are considering a traditional SUV, but maybe it doesn't hit [the] sweet spot when it comes to design."

The ability to offer a coupe-like version of a given SUV is now viable because of quantum leaps in flexible manufacturing. A manufacturer can respond to market indifference to a vehicle with little notice – and plants can be reconfigured to build a more popular version in as little as five minutes. Nevertheless, the crossover coupe remains a niche vehicle, so it still represents a gamble.

The gambling began in earnest with the arrival of the Infiniti FX (now the QX70) in 2003. At the time, there was nothing like it – the exterior styling was dynamic to a fault. Although other SUVs – such as the BMW X5 and Porsche Cayenne – could claim sporty performance, the FX was singled out for its lack of rear-seat headroom, poor entrance and exit, and unsuitability to anything less than perfectly paved roads.

"In the late 1990s, we began to see the first car-based vehicles in the SUV segment," says Bert Brooks, senior manager for product planning at Infiniti Canada. "Our advance planning team studied the unmet opportunities in the segment and identified the idea of a crossover with the qualities of a sports car."

Ultimately, the business case for the FX made sense because it was based on an existing Nissan/Infiniti platform and the projected interest was sufficiently strong. While the general public seemed confused by the FX, enthusiasts generally supported the idea of the first crossover coupe, particularly the V-8-engined FX45.

The QX70 sells reasonably well, despite its age. In the United States last year, more people bought the Infiniti than the BMW X6. In New York, Infiniti brought a new crossover coupe that's set to join the lineup, the compact QX30, an indication that it's not done with this niche.

The United States remains the largest SUV market in the world, but the crossover coupe appears to resonate less there than in Canada. Using the BMW duo as an example, 47,031 X5s were sold in the United States last year compared with 3,896 X6s – or just more than 8 per cent. In Canada, the scorecard is more balanced: X6 sales represent 16 per cent of those for the X5 last year.

"A lot of SUV buyers like the X6 not just because of the utility, but because of the command seating position, ride height and overall feel of the vehicle," says Matthew Wilson, manager of product planning for BMW Canada. "The motivation for someone buying the X6 is much the same as for someone who chooses a coupe over a sedan – it's the design and the performance."

Critics remain steadfast, citing the ill-fated Acura ZDX as being a poster child for why the crossover coupe is the proverbial "vehicle that no one ever asked for."

A big factor in the success of a given vehicle, though, appears to be exterior design. While the ZDX and other crossover coupes have been labelled "ugly ducklings," the Range Rover Evoque won the World Design Car of the Year award in 2012 and has sold in droves.

Anyone looking at sales figures alone would consider the niche to be a loser. But manufacturers claim that having a sporty crossover in the fleet can be good for brand image. "We're still going to sell a lot more GLEs than we will Coupes," says Reuss. "[The choice is] going to come down to personal taste. Do you want more functionality, a styling statement or something sporty?" 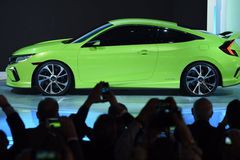 Porsche Boxster is back with much needed power, but at a price
April 1, 2015