Canadians are mere days away from observing one of the most time-honoured traditions this country has fostered in its 150 years of existence.

They will gather around the dinner table to give thanks for having cheated death and survived the annual Thanksgiving day weekend trip to the cottage/camp/cabin, also known as The Great Canadian Demolition Derby.

They will count the ways they dodged speeding drivers, avoided collisions with frenetic lane-changers and managed to steer clear of drivers texting and eating soup or trimming nose hairs while speeding and changing lanes rapidly.

Before Uncle Harold reaches for his third helping of stuffing, they will also discuss the latest increase in fines for such abominable behaviour.

As with all drivers, they will know that distracted driving carries as much as a $500 fine, depending on which province you commit your road crimes in and how many times you've been caught. They may even know that it will cost them upward of three demerit points.

But it's highly unlikely that they, or the lunatic drivers they were able to evade, have any idea exactly how much distracted driving and other traffic offences will cost them.

It's a lot more than the fine.

In addition to a fine, you could see your insurance rates double until those demerit points are cleared. "And hope to heaven you don't get another ticket," Thomas says. "Then you're looking at serious implications."

Even the best-case scenarios aren't too attractive.

If you're a top-rated 10-star driver with an infraction-free record, a distracted-driving charge could cost you two or three stars – and hundreds of dollars.

"Depending on your insurance company, that could affect your rates by 10 per cent," Thomas says. "So you're looking at a $500 fine and an increase in insurance for the next three years until that's off your record."

While the demerits are on your record for two years, they affect your insurance for three years. So, if you're paying $1,500 a year in premiums, your indiscretion could cost you an extra $950 (the $500 fine and $150 a year in insurance).

And if you have one of those first-offence-free deals from your insurer, you've lost it and will face an even bigger hike should you get another ticket.

Even costlier are multiple charges, such as not wearing a seatbelt or speeding while driving distracted. Or, maybe, driving with an obstructed view because you squeeze in a little too much on that trip to the cottage.

Those count as separate incidents and could mean far more than a 10-per-cent hike in premiums.

Should you cause an accident while driving distracted, you run the risk of a careless or dangerous driving charge. Not only will that cost you hundreds of dollars more in fines and a possible licence suspension, your insurance rates could double.

And, if you're thinking that staying away from your phone while driving is all you have to worry about, Thomas suggests you think again.

"Even turning around and telling the kids you're going to head home if they don't stop fighting could be distracted driving," she says. "It's more than just texting or talking on the phone.

"Even changing your GPS can be distracted driving."

Will driver-assist technology turn you into a bad driver?
August 12, 2017 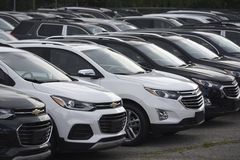 I got a distracted-driving ticket for vaping. Could I get out of it?
August 1, 2017
What makes some people prone to road rage?
June 20, 2017
Follow us on Twitter @globeandmail Opens in a new window
Report an error Editorial code of conduct
Due to technical reasons, we have temporarily removed commenting from our articles. We hope to have this fixed soon. Thank you for your patience. If you are looking to give feedback on our new site, please send it along to feedback@globeandmail.com. If you want to write a letter to the editor, please forward to letters@globeandmail.com.
Comments