With the Arctic snap currently blanketing most of the country in subzero temperatures, the idea of giving up control of one's car and allowing artificial intelligence to negotiate black ice, freezing rain and a whole host of winter nastiness may seem more fear-inducing than ever.

Indeed, according to some experts at last week's Globe Drive Mobility Summit, it is conditions such as those foisted upon drivers for long spells of the year in countries such as Canada that will set the timeline for the universal introduction of autonomous vehicles.

While humans may be able to drive in all kinds of weather, and at night, the sensors that will enable a central-processing unit to do the same – safely – do not yet exist. Krzysztof Czarnecki, professor of electrical and computer engineering at the University of Waterloo, envisions the timeline being eight to 10 years before all-weather autonomous driving is a viable option.

He says the challenge in dealing with precipitation such as snow is no different than it is for humans, with build-up on sensors obscuring their ability to operate in the same way that snow and ice on windshields blocks a driver's view. However, there is an upside down the road.

"The technology can be better than a human," he adds. "But we don't yet have the solutions."

Given that improved safety is one of the main selling points of a switch to autonomous cars, getting that right will be one of the main determinations of any seismic shift in our modes of transportation.

Magna International Inc. has partnered with the Michigan Department of Transportation and 3M to put together a test zone in Oakland, Mich., to help improve vehicle-to-infrastructure and infrastructure-to-vehicle communications.

The largest maker of car cameras globally, Magna knows that the more data a car is able to process, the better it will be at making decisions. The test zone in Michigan has been set up as a construction zone, with cones and construction equipment being constantly moved around, necessitating a car to adapt to different markers.

A test drive conducted in July last year in Michigan and Ontario was completed 92-per-cent autonomously. One of the few places a driver had to take over was going through the Windsor Tunnel, where there are no line markings for cameras to read off of.

"You have to be able to handle all those things," said Dave Pascoe, vice-president of engineering and research and development at Magna. He says that the more a car can read and react to its changing surroundings, "the more useful your vehicle is."

But while sensors certainly present a large obstacle to the everyday use of autonomous vehicles, another large barrier is that of insurance.

Pete Karageorgos, director of consumer and industry relations at the Insurance Bureau of Canada, said at the summit that in any sort of crash, determining fault is a key aspect for an adjuster making a decision of who is at fault. But while a human may swerve out of instinct to avoid a hazard on the road, perhaps hitting something else – say, a bicyclist or an oncoming vehicle – how does a computer make that decision?

"Insurance is based on risk, so it depends on what risk you present," Mr. Karageorgos said. "So when we look at claims, is an individual a riskier driver than another driver based on their driving record? Are certain programs riskier from an insurance perspective than others and how vehicles are programmed?"

With the answers to these questions still up in the air, Mr. Karageorgos says that while the long-term potential does exist for fewer crashes and injuries when automated vehicles become the norm, that norm is still "many years away."

Having a vision of what transport infrastructure will look like with the introduction of self-driving cars is also important to determine before their use becomes widespread.

As Adam Blinick, head of public affairs for Uber Canada, debated at the summit, what is the purpose of a self-driving car? It could be about reducing congestion, improving the environment and increasing safety, but how exactly does a society achieve these things?

One possibility is to create synergy between different forms of transportation, so people use self-driving cars for a portion of their commute, before switching to a different, more communal form of transport, such as a subway or train.

Now is the time to move people away from the idea of car ownership, cars that sit on someone's driveway for much of their existence.

"If we continue to push people into owning their own cars for the next 20 years, by the time self-driving cars come around there's a higher chance people will want to still be in a car ownership mode," he said.

He added that the time is now to get people comfortable with using a "suite of transportation options," whether that's bike sharing, transit or ride sharing.

But when the change to automated cars finally comes, some say it will be abrupt.

However, Jonathan Walker, transportation policy manager for ride-sharing company, Lyft Inc., says that the problem with that big switch is that people may not be fully comfortable with relinquishing control of their vehicles. As humans, we like to feel in control of our own car, despite the fact that we have no control or connection with the more than thousands of other road users we may pass by every day.

While data is showing that self-driven cars are far safer than human drivers on a per-mile, per-ride basis, part of the transition is to show drivers how those decisions are being made by a computer.

In addition, the continued implementation of driver-assistance features such as adaptive cruise control, lane-keep assist and automatic parking will all help when the switch to full autonomy finally arrives.

"We don't think of them as autonomy but they're starting to get us used to taking our hands off the wheel once in a while and letting the car do certain things," said Alex Manea, chief security officer for Blackberry. "So I think that creates a natural transition into that whole idea of letting the car drive itself."

Cars have become too complicated, but change may be coming
February 6, 2018 An ‘ethics knob’ could be part of the self-driving future
February 7, 2018 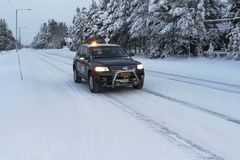