An auto maker's most valuable asset isn't its factory or the cars that roll off the line. Its name is everything.

And everything the company stands for is behind that little logo on the front of the car. It's a tiny design feature that identifies the auto maker with the public, no matter the type of car.

Famously, in 2006, Ford mortgaged its assets – including its Blue Oval logo – for a $23.5-billion (U.S.) line of credit; the company finally regained ownership of the logo six years later. Can you imagine Ford without that identity? That script has been in existence since 1909 and, while some may not consider it a design winner, it's a perfect example of how a logo can become entrenched with its company values.

"I've never loved the Ford logo, I think it's fussy," says Bob Hambly, a partner at Hambly and Woolley, a graphic design firm in Toronto. "Ford to me is an amazing company with history, and it's certainly a memorable logo, but it's not strong.

"But sometimes you don't want to mess with a logo, for the simple reason that everybody knows it, it's been around for a hundred years."

Vanessa Eckstein, founder of Blok Design in Toronto, agrees. She points to the connection of an emblem when it comes to a brand's image.

"People will want a re-brand, but they don't understand that there's equity in that brand, there's loyalty and a point of familiarity," she says. "You might do the most beautiful and balanced logo, but you've lost the relationship with your audience, with the people who are truly loyal to your brand. Ford carries that storytelling; it's difficult to get into that brand without understanding the equity it carries."

As for the logo itself, good design is relative; different (pen) strokes for different folks, so to speak. But there are elements that all good logos share. Most importantly, can a logo pass the test of time?

"(A logo) should be a reflection of the essence or spirit of that car," Eckstein says. "It should try to bring those values forward. It should also have a certain amount of simplicity to make it last a long time, but enough uniqueness that it will differentiate from everyone else.

"I've always liked the BMW logo, it's beautiful," she says. "It has all the elements, the clarity, the simplicity. There are symbols that are simple enough to withstand the passage of time, and the BMW logo is one of them. A great logo is timeless, but also able to shift."

"What it boils down to is you're trying to sum up what you're all about as a company," Hambly says. "Your culture and your history and what you represent in one little icon. We live in a world with a gazillion logos, but a good one will tell you everything without having to read the words."

Often, car logos have a back story; it's part of what helps them resonate with the public. These stories are often a part of the auto maker's history, but with successful companies, it's the stories and image they cultivate that become interlinked with their visual seal.

"With some logos, you connect immediately," says Marko Zonta RGD, principle and creative director at Zync brand and digital agency in Toronto. "Volvo, for example, has run so many campaigns on how safe the car is, that when you see their logo, you think of safe cars. Even today, when their cars aren't really any safer than others on the road, you still think of them as being safe."

And then there are logos that visually just don't work. For Eckstein, it's Lexus. "I don't like the typography and the shape, it just doesn't end up balancing well."

For Zonta, Chevrolet's bow tie is a miss. "It just comes down to what does it mean? We all know what it is, but it doesn't seem to mean anything."

And Hambly would love to redo the Mitsubishi logo. "It's triangular, almost like a radiation symbol, it just doesn't say car to me."

Regardless of shape or colour, what matters most is what stands behind that emblem on the front of every car.

"Having owned an Audi," says Hambly, who is also a fan of its logo, "I know they really work hard with their overall brand, from their look to the overall customer experience. They do it brilliantly.

"You can have the world's greatest logo, but if the product is bad or the service is bad, the logo doesn't matter." 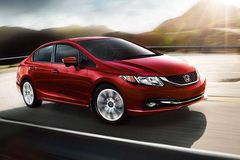 Globe writer giving away beloved car for free, but it has to go to a good home
June 4, 2015 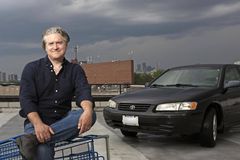