Mark Webber is being mobbed by reporters. The handsome Australian with the chiselled face and dark windswept hair could have been a Hollywood hunk had he not spent his days racing Formula One cars. Today, he's jumped into the world of endurance racing, competing in the 24 Hours of Le Mans for the first time. It's a traditional career path for ex-F1 pilots.

Meanwhile, Webber's young co-driver, Brendon Hartley, is entertaining a lone reporter by his table in Porsche's trackside hospitality centre. The New Zealander with scraggly blond hair looks like he belongs in a Red Bull commercial. No, he looks like he should be playing Frisbee on the quad between bong rips.

"Saying you're a racing driver never works with women. It's a myth," says Hartley. "Either they don't believe you, or they don't care. But, for the record, I've had the same girlfriend for 10 years."

Where Webber is poker-faced about the challenges of Le Mans, Hartley is nerves and enthusiasm. But they both want they same thing. They just want to get on with it.

"We've been preparing so long – since the end of the race last year – I'm sick of talking about it," Hartley says. "I can't wait for Saturday, when it'll just be me, alone in the car."

Le Mans is among the longest-running races in the world, staged annually since 1923 with the odd break for war or economic depression. It takes place in the town of Le Mans, to the west of Paris, on a mix of public roads and dedicated track which make up the 13.6-kilometre Circuit de la Sarthe.

In the old days, it was a victory just to finish, with drivers and car both surviving the night. Today, as the announcer says over the PA, "what you are about to witness is 24 one-hour grand prix sprints."

Teams don't pace themselves any more because the competition has become so fierce. Some 80 per cent of every lap is spent at full-throttle.

What would happen if Greenpeace ever caught wind of all this: how much carbon dioxide do 55 race cars produce in 24 hours? And for what? The enjoyment of 250,000 odd spectators? Corporate bragging rights? Won't somebody think about the trees? They'd have a point, but Porsche claims racing here helps to develop eco-friendly technology.

It has dubbed 2015 "Mission Future Sports Car." While such claims smack of green-washing, Porsche gets the benefit of the doubt here. Le Mans is a good test of durability and reliability, and reducing fuel consumption leads to fewer pit stops – which can lead to victory.

Le Mans is a first draft for future automobiles. There is speculation BMW will enter a hydrogen-powered contender in the future. And an all-electric entrant – swapping battery packs instead of refuelling – seems more a question of "when" rather than "if". And what about an autonomous entrant? The 2037 Audi e-tron e-brain, a digital driver/car that makes no mistakes and does not get tired.

At exactly 3 p.m. on Saturday, the race starts.

On the third-floor balcony of Porsche's newly minted trackside Experience Centre, an elderly man in a Gulfstream G650 baseball hat is having his picture taken with two younger blond women.

Downstairs at one of the bars, a waitress – a student from Munich – is nearly at the end of her 6 a.m.-4 p.m. shift. Between work and wanting to watch the race, she says she'll probably only get an hour or so of sleep. Asked how she will survive the 24-hour race, she says with coffee and caffeine pills.

On track, an early crash: a Porsche 911 RSR misses a turn and skips across the gravel, taking out two other cars. One looks like Webber's red Porsche 919, No. 17.

A 13-year-old boy answers the question on everyone's mind. "Ohhhhh, was that a 919? No, no, it's not. Phew." He's watching the race with his dad, Pancho Meyer. They've come from Arizona, invited by a local Porsche dealer because he's such a good customer. Meyer's son, who just wants to watch the race, knows all the cars from video games. The boy says it's a dream come true to be here. "It's smart marketing," Meyer says. Le Mans is featured heavily in the Forza and Gran Turismo series on Xbox and PlayStation respectively.

"Porsche is basically the best team," the boy says, reeling off statistics. He knows more than your assigned reporter about this race.

Later, as darkness falls under cloudy skies, spectators around the track are calm, placated by the hypnotic effect of an endless stream of headlights dazzling and then disappearing around the next bend. The sheer variety of folding chairs is impressive. Spectators set them up in front of a trackside TV screen. It looks like a game of musical chairs, except the music never plays. Only Radio Le Mans broadcasts non-stop.

Morning dawns, and a teenager is asleep on the ground near the start/finish line. How his foam earplugs block out the head-splitting explosions these race cars emit as they rocket past is a mystery.

Porsche staff are still on duty, running the team's private shuttles around the track. One says she was lucky to get a five-hour block of sleep. Others have been sleeping on and off when they can.

You tend to think about the drivers in a 24-hour race. But the top drivers have massive support: team doctors and physiotherapists at their disposal, plus a quiet place to relax between stints in the car.

Spare a thought for the team strategists who spend the race looking at computer screens monitoring live telemetry from a windowless room, or the mechanics who are on duty the entire race. When a Porsche 919 comes in from the wars with broken nose section, they can have it off and a new piece fitted in less than a minute.

Twenty-three hours into the race, inside the No. 17 car, Hartley is again driving. Telemetry data says he's experiencing two times the force of gravity as he steers the car through a particularly high-speed corner. The lateral force makes his head feel twice as heavy as normal while pushing it against the side of his seat.

This year saw record attendance: 263,500 spectators, according to organizers. Imagine Toronto's Rogers Centre filled five times over. Now, imagine everyone all hungover and tired and deeply satisfied as if the Jays had just crushed the Yankees. That's what Le Mans feels like.

"If Porsche wins, it'll be their 17th win at Le Mans, and 17 years since their last win," the 13-year-old videogamer says over a late lunch. He called it. At 3 p.m. on Sunday, the No. 19 Porsche takes the chequered flag.

Webber, Hartley and Timo Bernhard in the No. 17 Porsche finish second, exactly where they started 24 hours earlier.

What was the point then? Why did all these people work so hard and lose so much sleep? To put us one step closer to building zero-emissions sports cars? Sustainable fun.

The curious case of the disappearing Toronto Indy grandstands
June 15, 2015 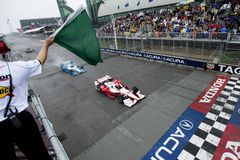 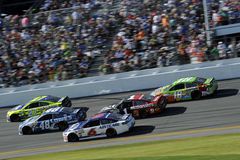