The writer was a guest of Volkswagen. Content was not subject to approval.

Our helicopter wobbles, like a dreidel, before landing on a windy mountain above the town of Amarante. Everyone ducks under the deafening chop of rotor blades as we disembark. The Atlantic Ocean is 60 kilometres to the west, Lisbon a three-hour drive south. Volkswagen has an espresso machine set up on the mountaintop.

Giant boulders, some as big as a house, are littered across the peak. How these huge rocks got up here is a great source of wonder. 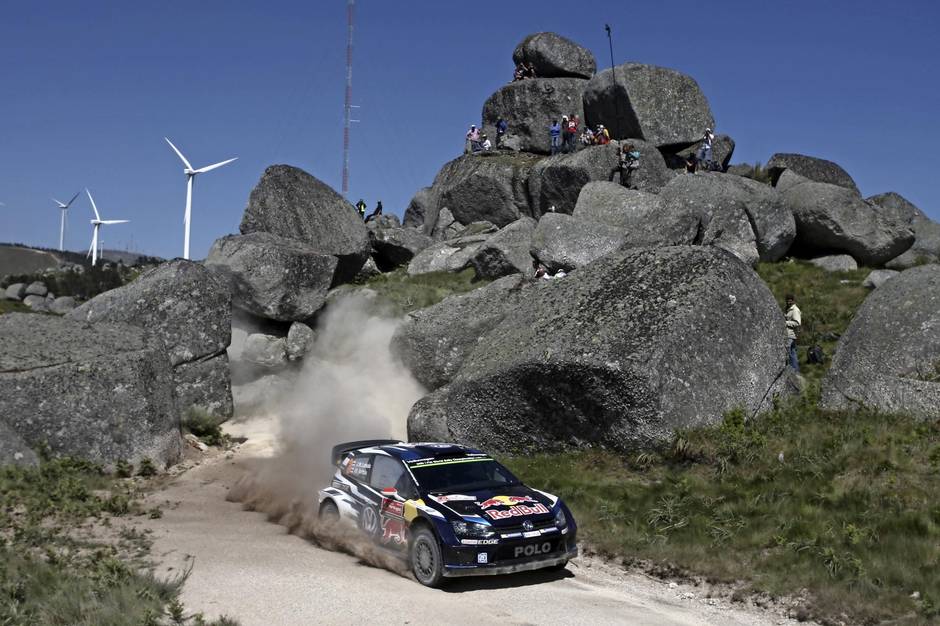 Photographers are already at work, marking their territory by setting up lights and remote cameras. All lenses point toward an anonymous farm road that skirts a sheer drop for most its length.

In half an hour, everything on this windy mountain peak will be obscured by a wave of dust, kicked up by the world’s bravest drivers in the world’s cutest race cars.

This is the Rally de Portugal, round five of the FIA World Rally Championship. Who can drive fastest on any given road? Who is least afraid of the unknown? 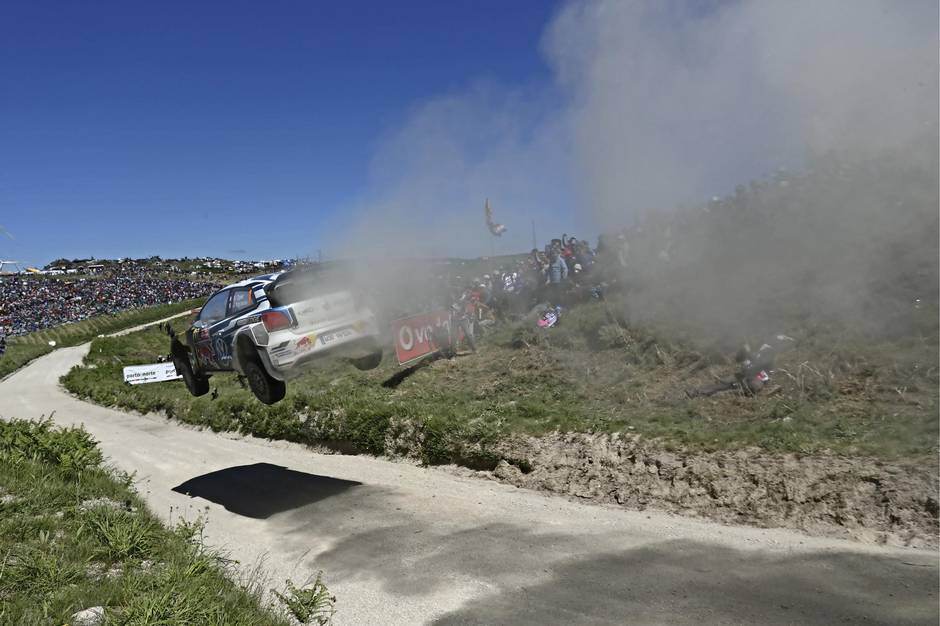 You hear the sound first: a feint hum that grows into a violent chainsaw buzz, gasoline exploding to create forward motion.

The photographers raise their cameras. And there it is: a dinky Volkswagen Polo, a sub-compact hatchback, flying down the road. It’s resplendent in Red Bull livery, be-winged and wide-bodied with long-travel suspension, but nonetheless a caricature of … ohmygod it’s not slowing down.

Sebastien Ogier – Frenchman, reigning world champion, 31 years old – flicks the No. 1 Volkswagen sideways, sliding it through one corner, then the next. You’d say he was careening out of control except for the fact his driving is inch perfect: kissing boulders with the bumper, undaunted by the cliff to his right. A cloud of dirt follows the car like an airplane’s contrail.

The Portuguese round of the WRC takes place over four days and 16 stages, each between 10 and 40 kilometres long. Cars race against the clock, starting two minutes apart. The fastest overall time wins.

Drivers rely on the instructions of a co-driver in the right seat – in Ogier’s case that’s Julien Ingrassia – whose job is to call out homemade directions turn-by-turn in a rapid-fire stream of consciousness. Their lives depend on each other.

“It’s actually more intense than a marriage,” says Luis Moya, national hero in Spain, two-time WRC champion, and co-driver to the great Carlos Sainz. “Because in a marriage you can go off into the kitchen or other room, but here we are stuck in this little box. We have to resolve everything right away or else it won’t work.”

At the end of Day Two, Ogier is in a bad mood. He’s 25 seconds behind the leader. He says his problems were beyond his control: he was first on the road, sweeping it for later drivers, giving them the advantage. But by the end of Day Three, Ogier raced his way up to second place, only 9.5 seconds back. 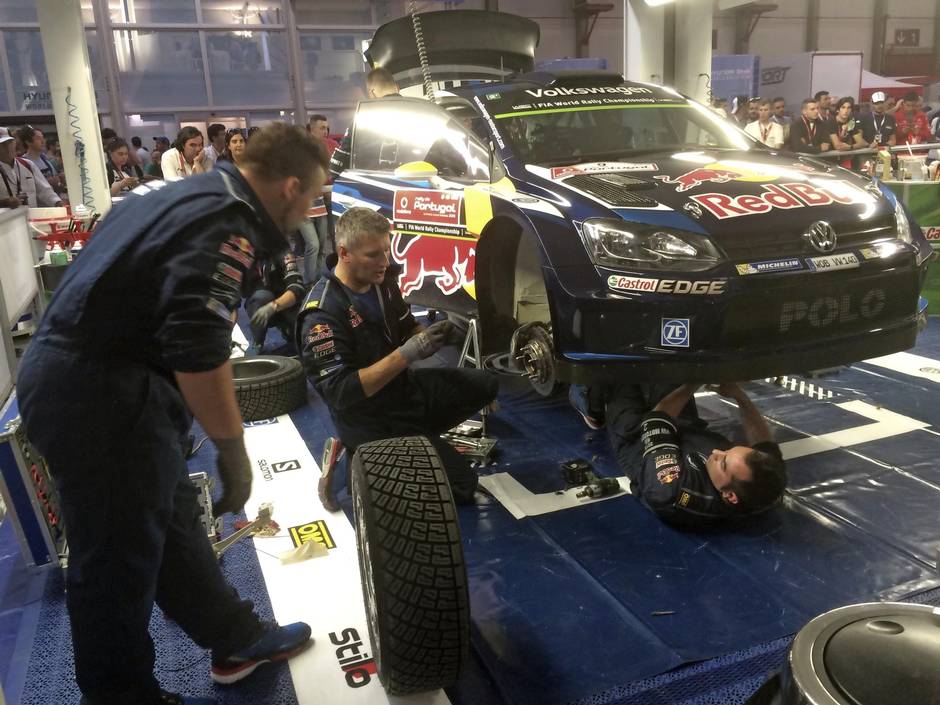 Despite the small four-cylinder turbo engines, and relatively modest output of around 315 horsepower (the real number is a closely guarded secret) WRC cars can do 0-100 km/h in about three seconds. Part of the sport’s appeal is that the cars are based on humble machinery, hatchbacks a European teenager might hope to buy: Ford Fiesta, Hyundai i20, Citroen DS3 and Volkswagen’s Polo.

It’s the opposite of Formula One, with its millionaire playboy drivers, hyper-specialized cars and infinite budgets. Like NASCAR, rallying is motorsport for the people, but the similarities end there.

In the old days, rallying was a blood sport. Drivers died. Spectators died. It was lawless, especially during the Group B era from 1982-86. There’s footage of fans in the road, parting like a sea as the cars rocket through. It was a badge of honour to get grazed by a great driver’s wing mirror.

Even now, the sport still has some of that lawless flavour, partly due to the fact the Rally de Portugal is free. In nearly every other professional sport – hockey, basketball, baseball, F1 – how much you can afford to pay is directly related to how much you see. Here everyone can get close to the action. There are 1,500 police officers on duty but even they can’t patrol every bit of every stage.

Some spectators arrive on the mountain with their families early, camping with barbecues, elaborate tents, scooters, scaffolding, and generators (to run the freezer). On parents’ shoulders, children obliviously wave free flags with the white and green logo of oil giant BP. Fans bring a bottomless supply of pork and beer. And they share it freely, forcefully even, thrusting a bacon sandwich and Super Bok lager into the hands of a Canadian writer, even though he appears to be a dilettante suckling from the corporate teat, arriving late by helicopter and leaving early the same conspicuous way. 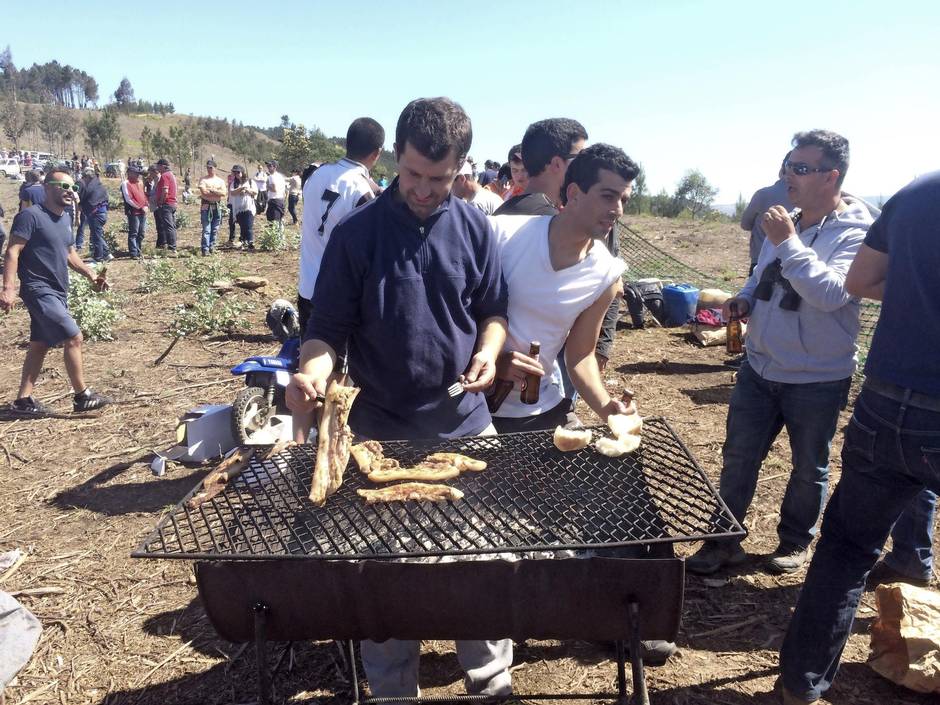 When Joao Passos was young, he’d watch rallying from his doorstep, as greats like Walter Röhrl and Ari Vatanen sped past his house. Today, Passos is a key organizer of the Rally de Portugal. He estimates it costs about $4.87-million to host. They buy the TV rights and give the footage free to the networks. But even then, the broadcasters aren’t too interested. Rally coverage usually airs in the wee hours of the morning.

“Rallying is a sport of passion...You have to smell it, taste it, feel it.”
Joao Passos

It doesn’t translate well to television. Without an expert eye to see if Ogier left any time in that last corner, there’s no immediate drama, only a ticking clock and a lone car going quickly.

From a distance, it is hard to understand the sport’s appeal: lots of waiting for brief flashes of excitement, the logistical difficulty of getting to remote places, no Jumbotron to monitor the action. And the chance of being in the right spot to see a crash is slim.

But up close, perhaps because it’s a free-for-all for spectators, there’s an atmosphere of laid-back camaraderie not found at many other sporting events.

The fourth and final day ends at a stage called Fafe. It’s famous for an enormous jump, where the bravest drivers fly their cars 40 metres through the air, landing just before the finish line. 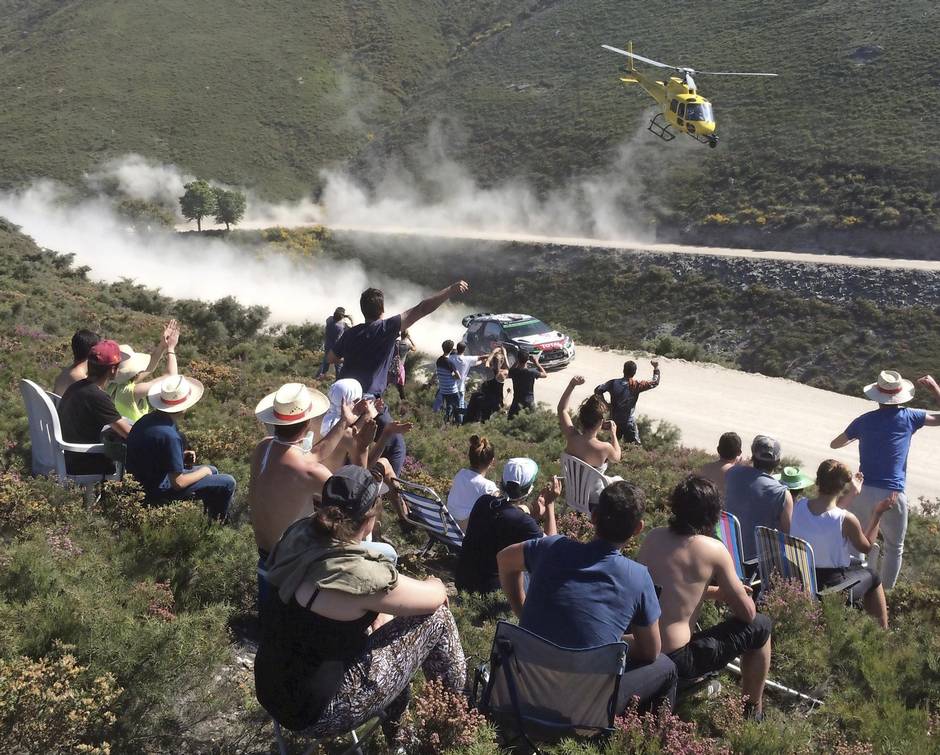 Around 50,000 people line this country road. They’ve been camped here since yesterday, some longer, waiting for this moment – or maybe this moment was just an excuse to come here. The crowd is mostly young: teenagers, or those who were teenagers 14 years ago the last time Fafe was part of the WRC calendar. One kid wears a sweater that reads: “Fafe Cathedral of Rally.” From a makeshift stage, someone’s playing house music. Nobody dances. People seem tired, worn out from days of drinking and eating pork under the sun. But they’re happy.

Passos is right, of course, rallying is a uniquely visceral experience.

It’s true nature can’t be televised or live Tweeted and that makes it a rare thing.

A whistle blows, which means a car’s headed towards the big jump. Ogier takes flight. He’s fearless, flying his car higher and farther than anyone else today. The ground shakes as it lands. He made up time on this last stage, but not enough, and finishes second behind Volkswagen teammate Jari-Matti Latvala.

Walking away from Fafe, the smell is faintly of gasoline but mostly of dirt. The taste is dirt too; you can’t help but inhale as it envelops you.