Drivers aren't obliged to take the Going-to-the-Sun Road in Montana's Glacier National Park. There are plenty of roads around the park. But during the summer months when open for travel, millions of enthusiastic travellers go out of the way to experience it.

Built over the span of 20 years nearly a century ago, the 80-kilometre road climbs to 2,026 metres at Logan Pass on a long and narrow 6 per cent grade that is rarely wider than 6.7 metres.

Winding and twisting under overhanging rocks, it takes a hairpin corner, goes through tunnels, and inches upward ever too close to precarious cliffs – forbidden to most trailers or larger motorhomes. Cyclists, motorcycles, enviable convertibles, minivans and tourists in the brilliant red topless buses flock to the spectacular mountain route in record numbers every year. Without stopping, it takes two hours, but you are going to want to stop. 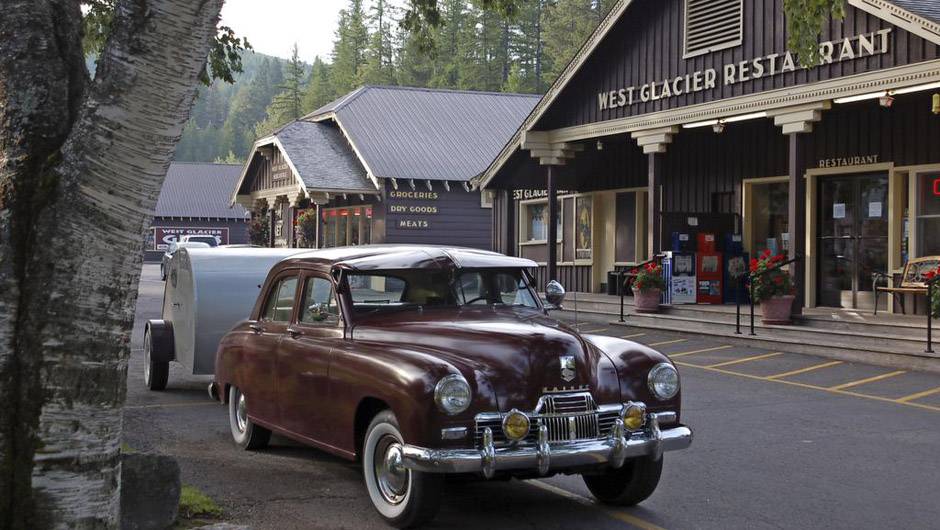 Though we live in Alberta, I enter the park from the southwest to follow the route as it was constructed. When the Great Northern Railway was completed in 1893, the national parks created destinations to lure tourists from the eastern United States to this new wilderness. To accommodate them, two boxcars that had served as the railway’s depot at the western entrance were replaced by small Swiss-style buildings and renamed Belton Station. Many of those buildings are still intact, housing cafes and shops. 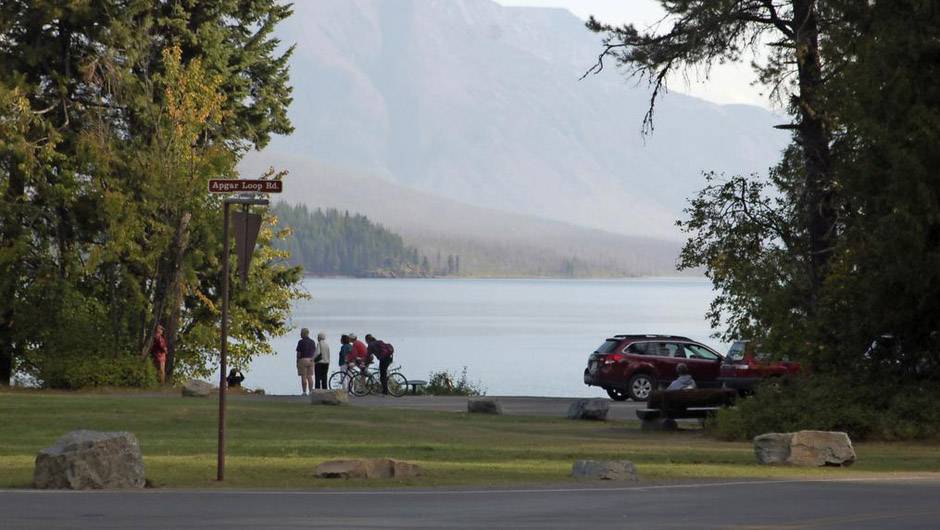 Lake McDonald and the lodge

The road follows Glacier’s largest lake from tip to toe. It’s 16-km long, and 2.6 km across at the widest spot. Near the midpoint, Lake McDonald Lodge built in 1895 by John Lewis and cleverly called the Lewis Glacier Hotel, was accessed by a steamboat from the village of Apgar. The great western artist, Charles M. Russell, was a frequent guest during the 1920s and was said to have etched pictographs into the dining room’s original fireplace hearth. Stop in to see the historic hotel. Better yet, book months in advance for a stay in a lakeside cabin (glaciernationalparklodges.com). 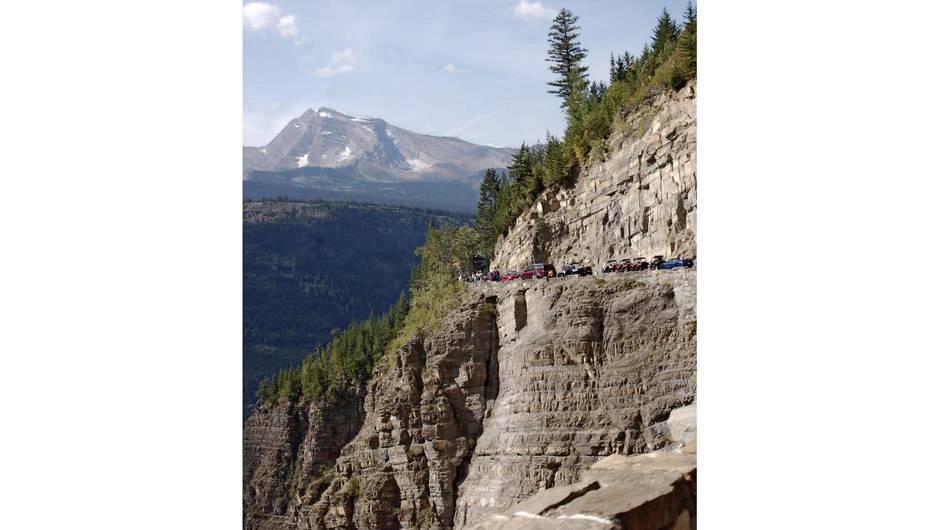 Going to the Sun: Legend or just a darn good name?

The road officially received its name, “The Going-to-the-Sun Road,” during the 1933 dedication at Logan Pass. The road borrowed its name from nearby Going-to-the-Sun Mountain. Local legend and a 1933 press release issued by the Department of the Interior, told the story of the deity, Sour Spirit, who came down from the sun to teach Blackfeet braves the rudiments of the hunt. On his way back to the sun, Sour Spirit had his image reproduced on the top of the mountain for inspiration to the Blackfeet. An alternate story suggests a local hunter and his companion from the Pikuni Nation created the name after successful hunt in the late 1880s. 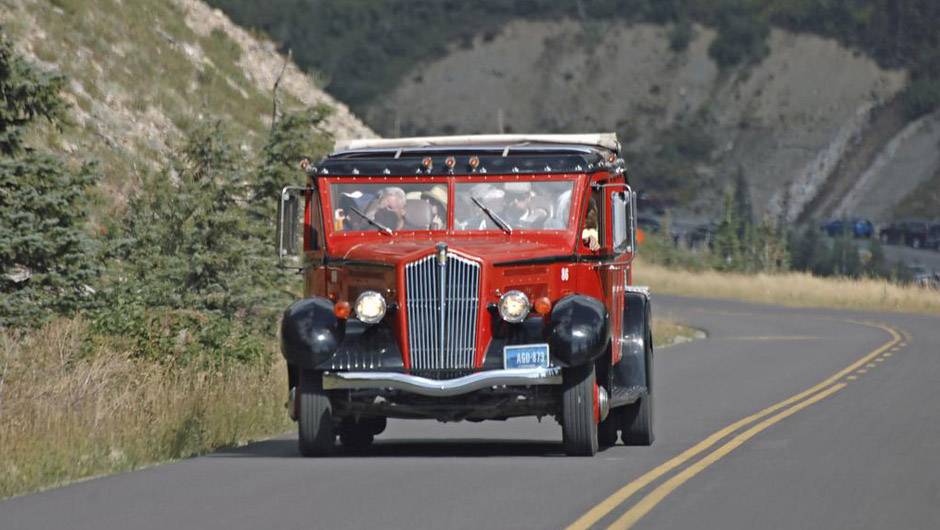 Watch for the jammers

The vintage buses with the roll-back toppers roaming the road are from the 1930s and were the first authorized motor transportation utility allowed in the parks. The first tour buses were horse carriages hauling 11 people up the road. The brilliant red colour was chosen to match a ripe Mountain Ash berry. The drivers are called “jammers” because they used to be heard jamming the gears of the buses as they grinded up the steep inclines. Back in the days of jamming gears – women were not allowed to sit in the front rows. They were thought to distract the driver. This fleet of 33 buses is considered to be the oldest touring fleet in the world. 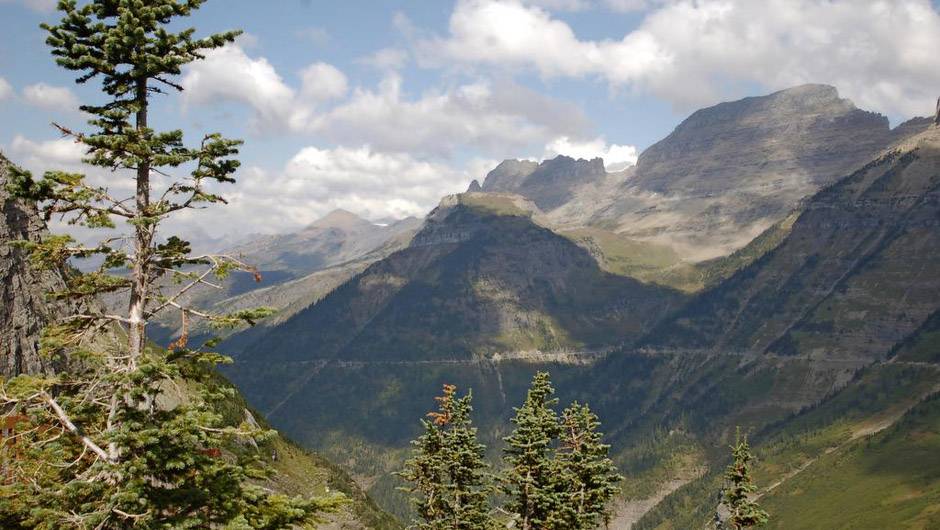 Slow, steady and costly or zig-zag?

In 1924, Stephen Tyng Mather became the first National Parks service director and was in charge of designing a route over the continental divide that would bring visitors. Mather, along with key engineers and architects on horseback, rode into the valley, up over the Continental Divide and stared out at the view. George Goodwin, an authority on mountain road construction, waved his arms back and forth – envisioning switchbacks like in Europe. There would be 15 on this side of the valley and another three on the eastern side of the divide. As a car zigged one way, they would see the cars below them zag the other way on an 8 per cent grade. Goodwin thought that was a spectacular engineering feat and an attraction.

However, landscape architect Thomas Vint said that Goodwin’s roads would look like logging or mining roads and cause huge scars on the pristine environment. He suggested one long slow road benched into the sedimentary rock of the Garden Wall. It would be longer and far more expensive but would leave the landscape preserved.

Mather took the ideas to other engineers and architects and even though the switchbacks were cheaper, the scenic aesthetically pleasing route was picked because it “performs its work more silently.” 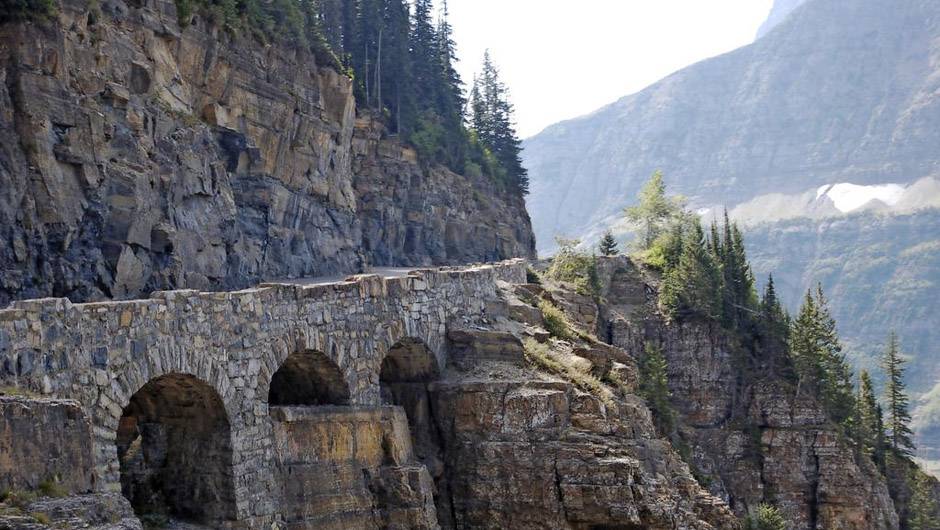 This road wasn’t easy to build, with most of the materials and equipment brought in by horse. To blast the rock, workers were lowered by rope to hand-drill holes in the rock face. Instead of leaving the blasted rock along the route as unsightly debris, it was used as fill under this road and in the retaining walls that hold the road in place. A crew of Russian stonemasons built retaining walls and the famous Triple Arches. They could lift most rocks on their own but at the corner, a derrick was used to place the larger rocks. Workers were paid 50 cents to $1.15/hour. In the 1920s and ’30s, men were desperate for work and eagerly took the wage. At the peak of construction, more than 300 workers were scattered through the valley. 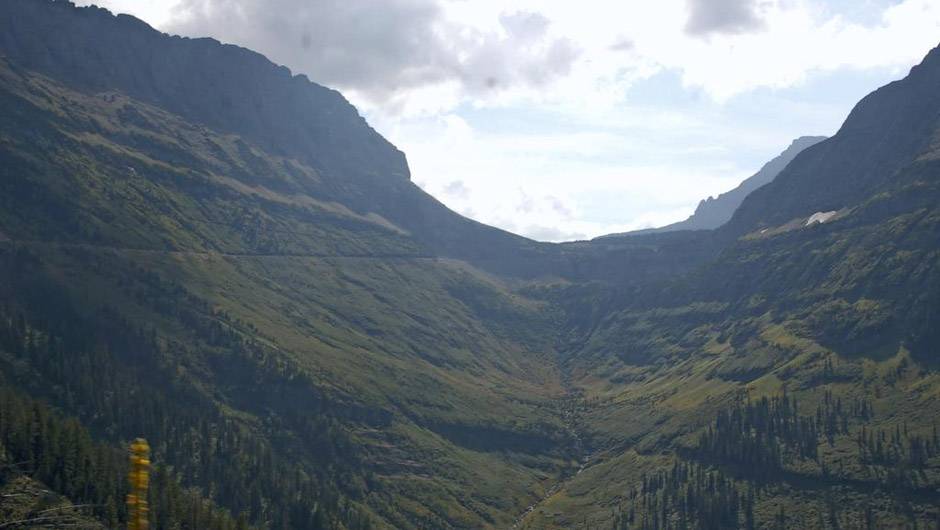 Almost at the top of Logan Pass

At 2,026 metres, Logan Pass is the lowest pass across the Continental Divide. Near the top, there is a parking lot to pull in to take a break. Walk along the raised boardwalk to see how the road hides in the stratigraphy. It’s a lovely spot to watch for wildlife – including mountain goats. 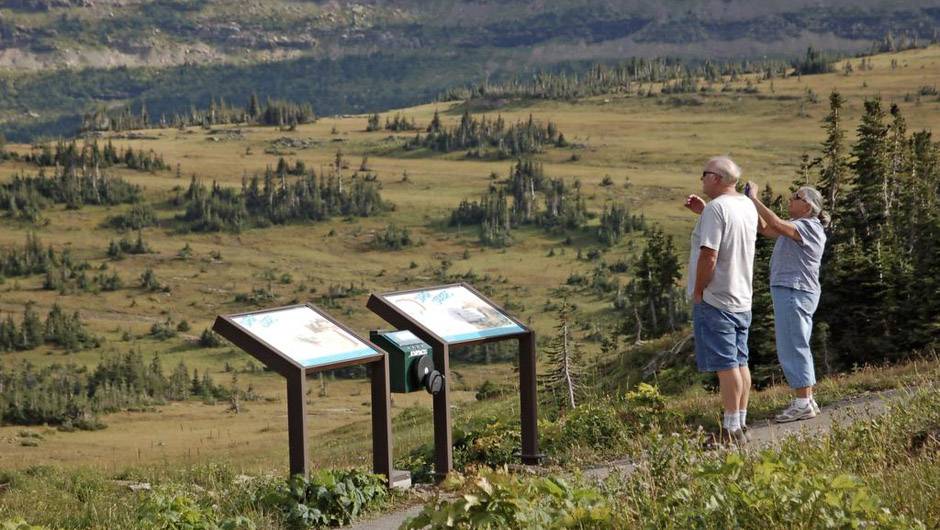 Stop at the information centre at the top of the pass to refuel your souvenir hamper, water bottle or coffee cup and give your legs a stretch. There are more than 1,126 kilometres of hiking trails in Glacier National Park, with a few leaving from the Logan Pass Visitor Centre. The easiest is the interpretive trail. The interactive story boards along the way explain the topography, the flora and fauna and history. Another great trail from Logan Pass is the Highline Trail hike above the Garden Wall. Five words of advice: You are in bear country. 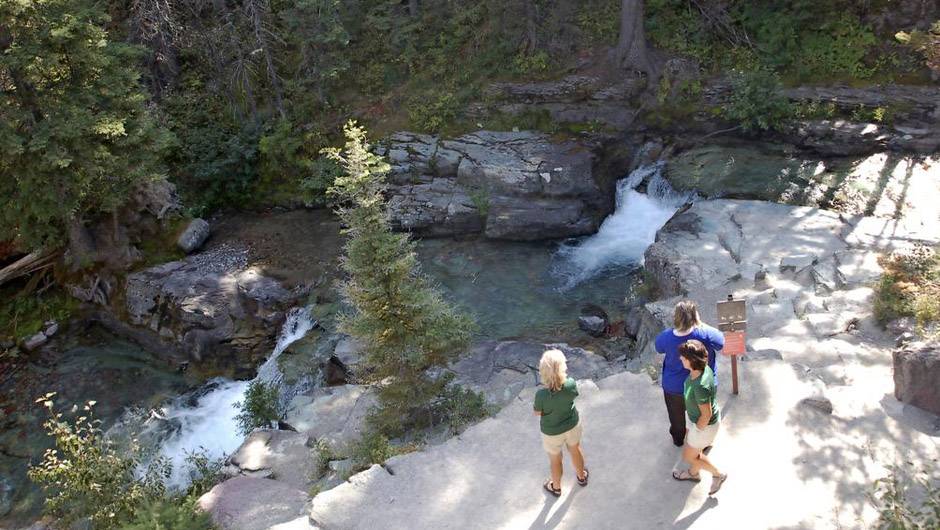 Expect waterfalls, walks and wide open spaces as you head to the east

Getting to the top from the west was the great push of the 1920s. But it would be two years before the east side of the road could be started because cash was hard to find. Not only that, landowners knew they held all the cards and inflated the price for their land. By 1931, the last 17 kilometres to St. Mary was open for bids. This side of the pass is not as technical but there were still challenges to overcome. Watch for parking areas leading to hikes along the refreshing Virginia Falls. 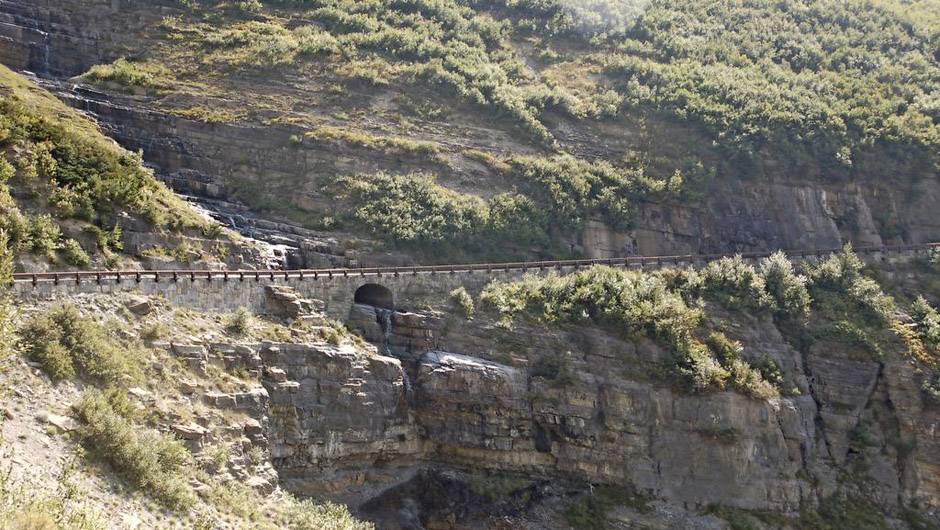 Rock work is a masterpiece

Setting an example for the rest of the national parks was important to Mather. The guard-rails and arches are made from native stone, mainly limestone and red and green argillite salvaged from blasts and excavations. Mortar sand was dredged from McDonald Creek. Put it all together and there is more than 13 kilometres of the stone rail lining the Going-to-the-Sun Road. The sturdy walls were such a hit with National Park dignitaries that they became the standard for guard walls in all U.S. national parks. 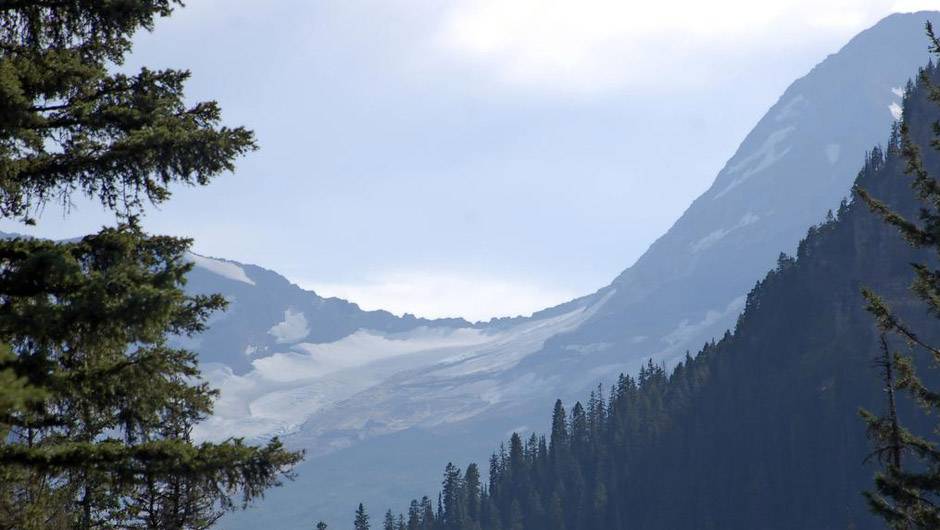 See the glaciers before they disappear

“Only about 25 glaciers remain from the 150 that were here in 1850,” says a sign at the numerous roadside vista parking spots. Citing everything from global warming to natural progression, the sign warns that in as little as a few decades, the view will undoubtedly change. The view from the lookout for Jackson Glacier is perfect for that last opportunity. 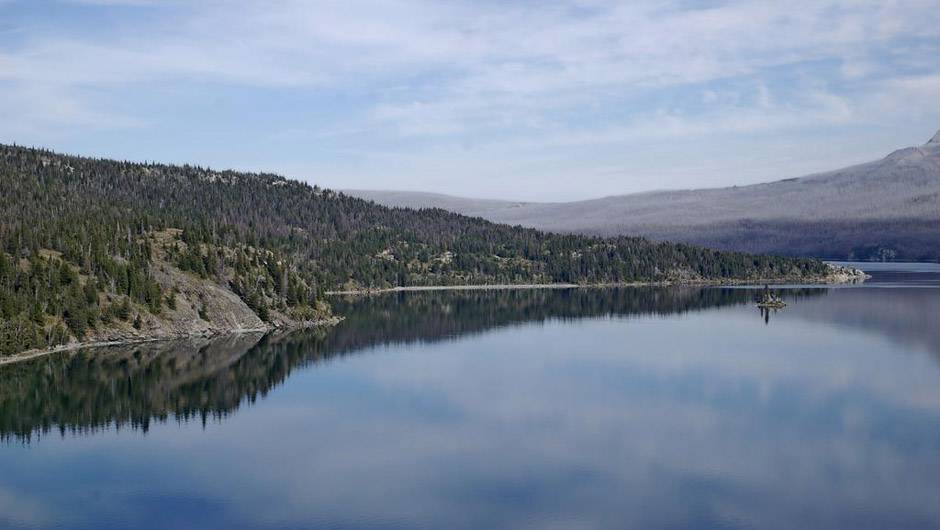 St. Mary’s Lake is the eastern most portion of the Going-to-the-Sun Road. The Golden Stairs retaining wall along the shore is the last of the major engineering feats along the route. When the road was deemed complete in 1934, the construction bill was $2.4 million. A keen eye will notice this is the famous opening scene from the 1980 Stanley Kubrick movie, The Shining. The scene shot from a helicopter starts at Wild Goose Island and sweeps to the west along the highway. Cue the eerie music. 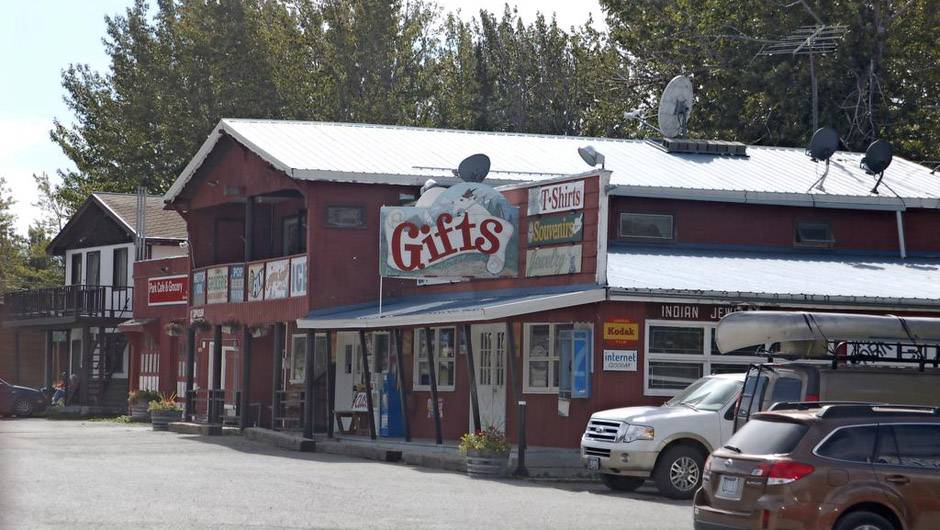 St. Mary’s has a few shops to stop at and gas stations to refuel

From Alberta head south on Highway 2 or Highway 4 across the border into Montana. From south of the park enter from either the West Entrance at Apgar or from the east at the St. Mary entrance. A park pass has to be purchased.

Plan to take this journey between June and September. The snow that accumulates in drifts across the roads can exceed 80 feet deep (24 metres), making it impossible to maintain the road year-round. More information about road closures, bike access and vehicle size restrictions can be found at nps.gov/glac/planyourvisit/goingtothesunroad.htm