The Monterey Peninsula is lumped like a barnacle onto the long hull of California's central coast. Located two hours south of San Francisco and five hours north of Los Angeles, the jutting land mass is home to America's greatest golf course, one of the world's best aquariums and an iconic 11-turn racetrack. Hop off Highway 1 to explore a sublime private road, an inventive sushi bar and sharks. We know you wanted to see sharks. 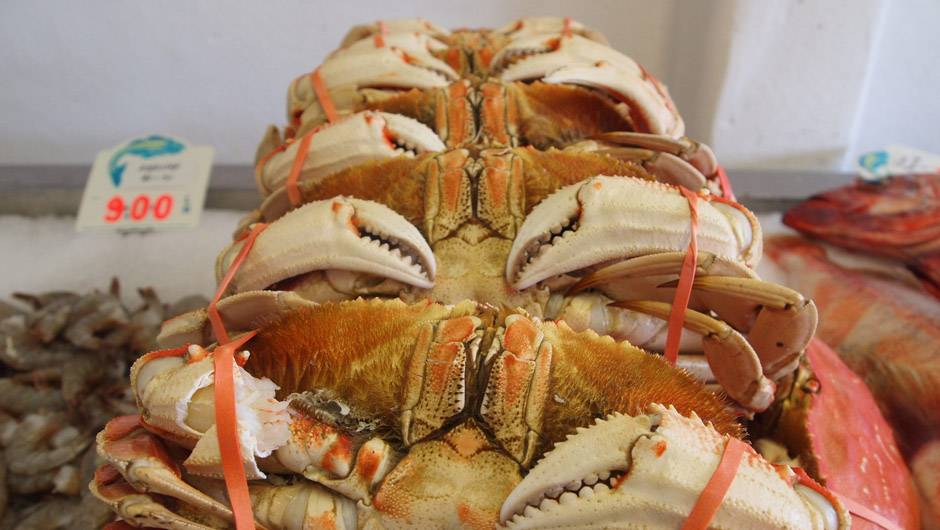 Park at Monterey’s Fisherman’s Wharf and walk to the end of Wharf 2 – past rows of locals casting for sand dabs – to find the Monterey Fish Co. Operated by the Tringali family since 1941 (four years before John Steinbeck published his novel about Monterey’s fishing industry, Cannery Row), the Monterey Fish Co. runs a retail shop at the end of this dock where boats come in bearing local spot prawns, squid, Dungeness crab and halibut. If you remembered to pack an empty cooler in the trunk, the guys behind the counter will scale and clean a beauty of a fish for you, and pack it on ice. 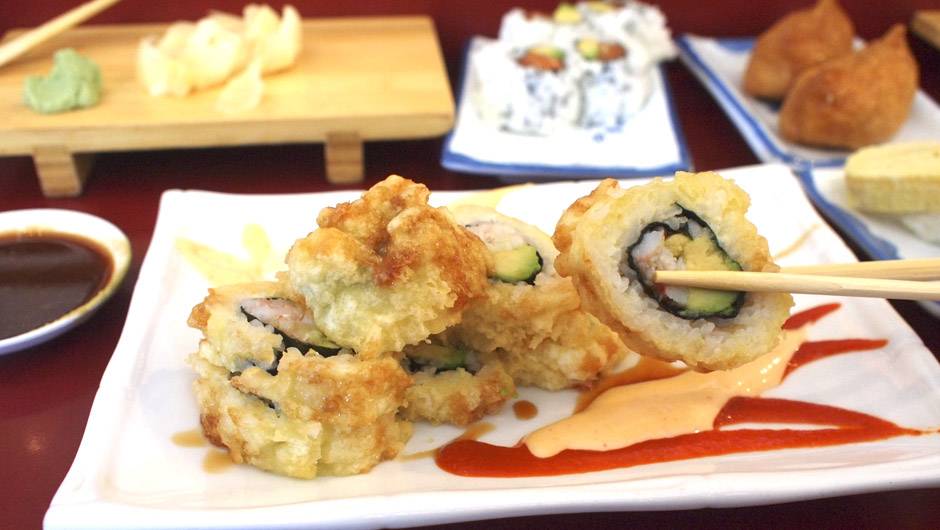 Beyond an unassuming storefront on Lighthouse Avenue, chef Tamotsu Suzuki executes wizardly moves at his sushi spot, Crystal Fish. Sit at the bar, order an Asahi draft, and ask Suzuki – the friendly guy in the black baseball cap – about the daily sashimi specials and anything else funky he’s got going. (This spring he’s experimenting with Japanese shiso mint that he grows in his home garden.) Crystal Fish’s long list of inventive rolls is the highlight: The Golden California, a west-coast classic of avocado and crab that Suzuki tempura fries and drizzles with a sweet glaze, is immensely satisfying. The Cannery roll is even better: filled with spicy scallop and avocado, and topped with tuna slices and macadamia nuts. 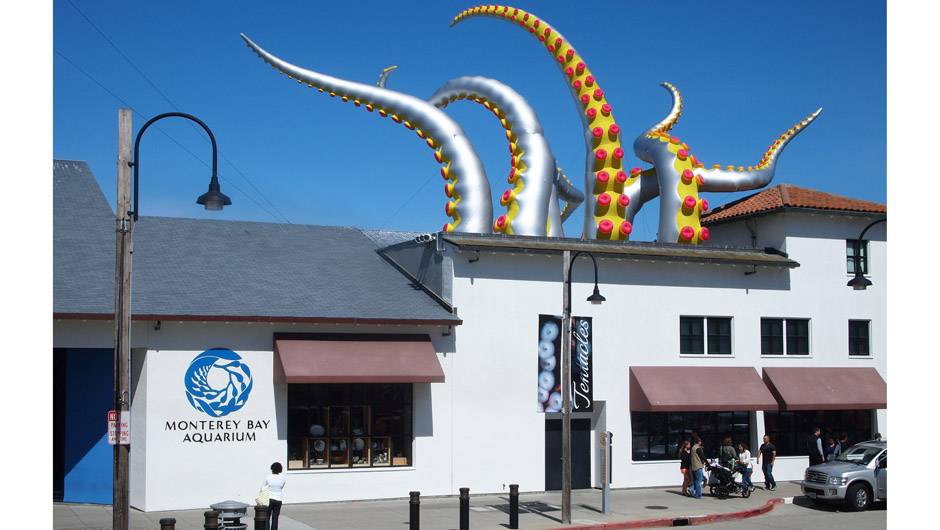 Celebrating its 30th anniversary, the Monterey Bay Aquarium lives at the far end of Cannery Row on the site of a former sardine cannery. It pumps in 8,000 litres of seawater every minute to host its 600-odd species of fish, turtles, kelp, otters, penguins and more. You can watch divers in the massive Kelp Forest and Open Seas tanks conduct daily feedings, providing a square meal to such fish as the California barracuda and the Southern stingray, plus enough different sharks to cast the entirety of Discovery Channel’s Shark Week.

This spring, the aquarium opened its newest exhibit, Tentacles, which features octopuses, cuttlefish, nautiluses and squid – including the vampire squid, whose Latin name, Vampyroteuthis infernalis, literally translates as “vampire squid of hell.” 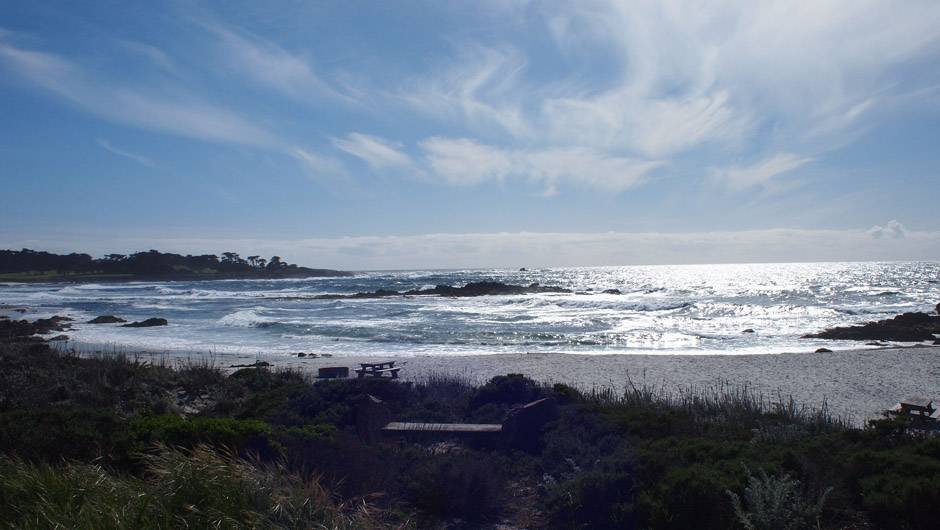 From the wide-brimmed park-ranger hats and polite-but-authoritative demeanour of the men collecting a $10 entry fee to access 17-Mile Drive, you’d think this was a National Park road. But the peninsula’s most stunning drive is actually a private toll road administered by the Pebble Beach Corporation.

Still, it’s worth shelling out a tenner to a group of superrich investors (including Arnold Palmer and Clint Eastwood) to follow the dotted red centre line of this immaculately maintained drive as it snakes along the rocky granite coast, past multimillion-dollar beach bungalows and some of the most beautiful golf courses in America: Spyglass Hill, Cypress Point, Poppy Hills and Pebble Beach.

Most visitors enter and exit the loop road at the inland Highway 1 gate, but the choicest coastal segment runs nine miles from the Pacific Grove gate down the coast to the Carmel gate. If you remembered to grab some oysters from Monterey Fish Company and packed a shucker, too, stop off at Spanish Bay and snag a picnic table on the wind-swept beach. 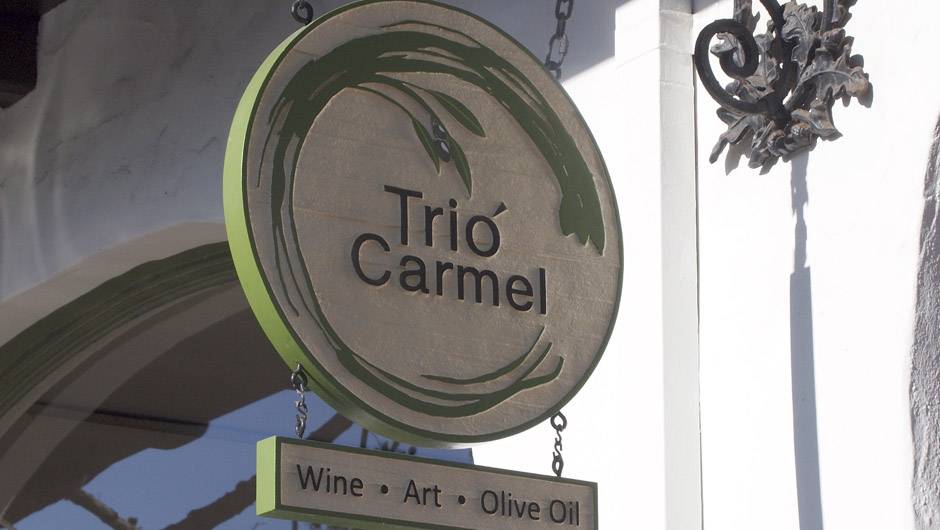 Carmel-by-the-Sea is the same town that tried to ban hippies in the 1960s via a city ordinance against tree climbing and lawn sitting, and elected Clint Eastwood mayor in 1986. Haight-Ashbury it is not. So an olive-oil tasting bar certainly fits in with the image of a tony seaside enclave that believes it’s too special for something as mundane as parking meters. But Trió Carmel is actually a rather pleasant and affordable place to taste and purchase a dozen different fresh-crushed extra-virgin olive oils from around the world (including one producer, Belle Vue, from the Carmel Valley).

Located on Dolores between Ocean and 7th – yes, Carmel also refuses to number its streets, which is really going to annoy your GPS navigator – the self-service tasting room also features several Monterey County wine producers. Try pairing one of the dozen-plus fused/infused olive oils with a Modena-made balsamic vinegar: Gremolata oil with Serano honey balsamic, anyone? 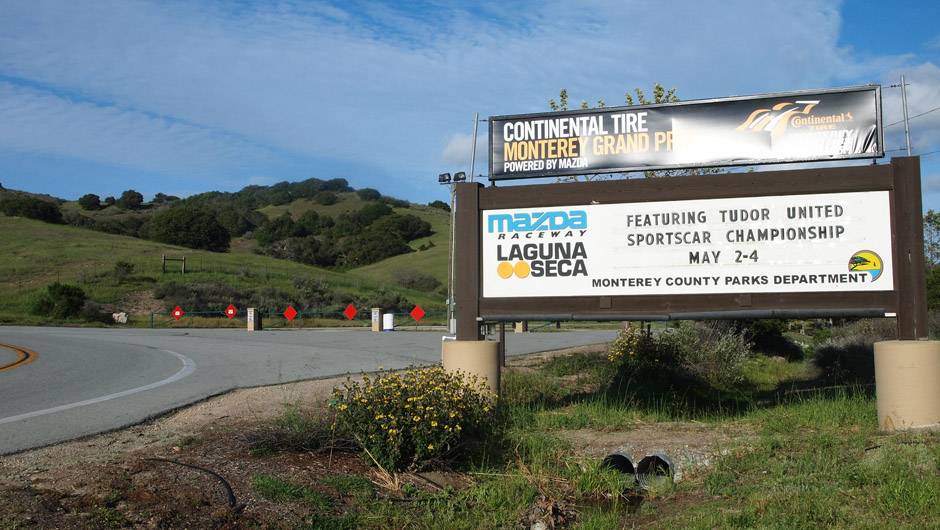 If the rubbernecking Sunday drivers crawling along the peninsula are bumming you out, cross Highway 1 to head inland a couple of miles on the 68, where you’ll find the speed limits increasing dramatically at the Mazda Raceway Laguna Seca. Built in 1957, the 2.24-mile, 11-turn circuit hosts the only Superbike World Championship race in the United States each July.

The raceway is also available for private rentals, though that will cost you more than the $10 fee on 17-Mile. Your best strategy to experience Turn 2 (the Andretti Hairpin) and Turn 8 (the Corkscrew) first-hand is to attend the monthly evening bike rides. Camp at one of five different campgrounds inside the Laguna Seca Recreation Area, including several track-side locations. Imagine grilling that fresh-off-the-boat rockfish from Monterey Fish Company over the campfire as SBK bikes buzz across the asphalt just beyond the oak trees. A road trip, indeed.