HOV lanes between Seattle and Vancouver should be turned over to self-driving vehicles, says a private venture-capital firm envisioning the not-so-distant future.

At first, self-driving vehicles would share the High Occupancy Vehicle lane on I-5 to Richmond, B.C. and Highway 99 into Vancouver, according to the report. After early adopters pave the way and the masses begin to acquire autonomous vehicles, the lane could be dedicated exclusively.

"They're safer," Tom Alberg, managing director of Seattle-based Madrona Venture Group and one of the report's authors, said in an interview Tuesday evening at the Fairmont Hotel, as the Emerging Cascadia Innovation Corridor Conference wrapped up. "Allowing them into the HOV lane would be an incentive for more people to get into an autonomous vehicle over time."

While the geographic link between Toronto and Buffalo is similar, there's no Canada-United States relationship quite like the Vancouver-Seattle connection – as being demonstrated this week, as raucous Toronto Blue Jays fans populate the stands at Safeco field for the critical series against the Seattle Mariners. It extends to business, as major United States tech firms branch into the Vancouver area.

At a luncheon session earlier in the day, Microsoft co-founder Bill Gates described the Washington-British Columbia connection as "a really good opportunity" in the technology sector (while also praising Canada's immigration policies as an innovation driver).

Opening the HOV lanes "sooner rather than later would not only allow residents of the Cascadia Corridor to reap the direct benefits sooner," the report stated, "it would better connect the two cities and send a message that Seattle and Vancouver embrace new ideas and new ways of thinking, further cementing a reputation for innovation in the Cascadia region."

When his company first began researching the report, Alberg said he believed the major benefit of self-driving vehicles would be to ease congestion on the north-south corridor. Alberg, also a member of Amazon's board, came to accept that autonomous vehicles could actually lead to more vehicles on the road. Then he realized other benefits of self-driving cars.

"I wouldn't mind being stuck in traffic if I could be productive," said Alberg.

"There are lots of things you can be doing with that 2-1/2 hours to Vancouver. But the problem today is, you're sitting there knowing you're wasting time and you're clutching the wheel because you're looking out for the other cars – and now comes a rainstorm [to aggravate the situation]. A lot of the benefit would be feeling better, along with safety – that's important – and recapturing that lost time."

Governments should look forward to autonomous vehicles rather than investing solely in traditional means of transportation, he said, pointing to a multi-billion dollar high-speed rail project in the United States as an example.

"I'm a real believer in technology and in Seattle, we're always looking for the next big thing," Alberg said. "Machine learning … virtual reality … and here come autonomous vehicles. The interesting thing to me is, it's not only Google and Tesla, it's GM, Chrysler, BMW … really, in six months they've all jumped on board."

He said self-driving minivans, small buses, and privately owned cars have significant potential to "further stimulate" the shared-ride movement taking hold on the West Coast. He understands the technological hurdles. But he was also once a BlackBerry loyalist, and finds it "sad" that the Kitchener-Waterloo, Ont.-based company paid little heed "to a little company called Apple."

Today he carries a different smartphone. He uses it to call up Uber in Seattle. And some day, he knows, that phone may be used to beckon his autonomous vehicle to pick him up at the office and take that HOV lane home. 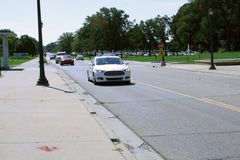 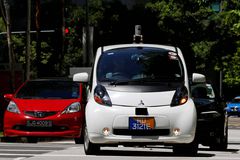