Car insurance rates may be decreasing on the whole in Ontario, but they are rising for Toronto residents and continue to vary wildly between neighbourhoods in the city.

A recent Kanetix.ca study shows the average rate in Canada's largest city for a single 35-year-old with a clean driving record in a 2013 Honda Civic is up $88 a year from last year to $1,886. And rates vary by as much as $955 a year, depending where you live.

"The most interesting thing is that while Ontario insurance rates have gone down overall they have actually increased overall in Toronto," says Kanetix.ca vice-president Janine White. "At the end of the day, everything is based on statistics. Higher density areas have a higher rate of accidents and claims."

Related: The 10 most expensive cities in Ontario for car insurance

Thirteen neighbourhoods – including Palmerston-Little Italy, Yonge-Eglinton and Mount Pleasant West – had the cheapest annual premiums in the city at $1,640. However, that is $161 more than the $1,479 in the least expensive area last year.

Kanetix.ca ran quotes for the same driver profile in all 102 areas in Toronto, divided by the first three digits in the postal code (known as forward sortation areas).

The Ontario average rate for the same driver is $1,448. Toronto is the fourth most-expensive city in the province for car insurance behind Brampton, Vaughan and Mississauga.

Kanetix.ca provides a detailed map of Ontario on its website that shows the average rate in hundreds of areas across the province.

As for why rates vary by almost $1,000 within the city, White says it has to do with the number of crashes and how much people have to drive.

The intersections of Sheppard Ave. E at Morningside Ave. and Albion Rd. at Islington Ave. are both in areas with some of the highest rates.

"Insurance is determined by the postal code where car is parked at night. If you live in the area, chances are you are in those high-collision intersections," says White. "The cheapest neighbourhoods have good access to public transit and high walk score areas. You may find fewer people in those areas actually drive cars, which means fewer accidents."

So what can you do?

"Moving is a little extreme," says White. The first step, says White, is to shop around because competing companies will often quote vastly different rates for the same driver.

If you like your insurance company, White suggests calling your agent to see how the plan can be tailored to meet your needs. There are discounts for bundling, winter tires, group rates or even graduating from a certain school. Ask about your coverage and deductible. You may have more coverage than you need, or you can lower your rates by increasing the deductible.

"About 50 per cent of us just auto renew without taking the 10 minutes to see if you can save a lot of money," says White. "I think it is time well spent. Shopping around or talking to your agent."

The 10 most expensive neighbourhoods in Toronto

The 13 cheapest neighbourhoods in Toronto all have rates of $1,640 a year

Nine ways to improve your winter driving and prevent a crash
May 17, 2018 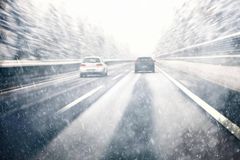 When it comes to auto insurance, your address matters
May 15, 2018