Starting early next year, when drivers fill up with gas in North Vancouver they will see a climate change warning label on the nozzle, in the same spot now used by many gas stations to advertise discounted bottle water or windshield wiper fluid.

The warning will be similar to the warning label on cigarette packages.

The Vancouver suburb is the first city in the world believed to make the labels mandatory after its city council recently unanimously passed the label bylaw. 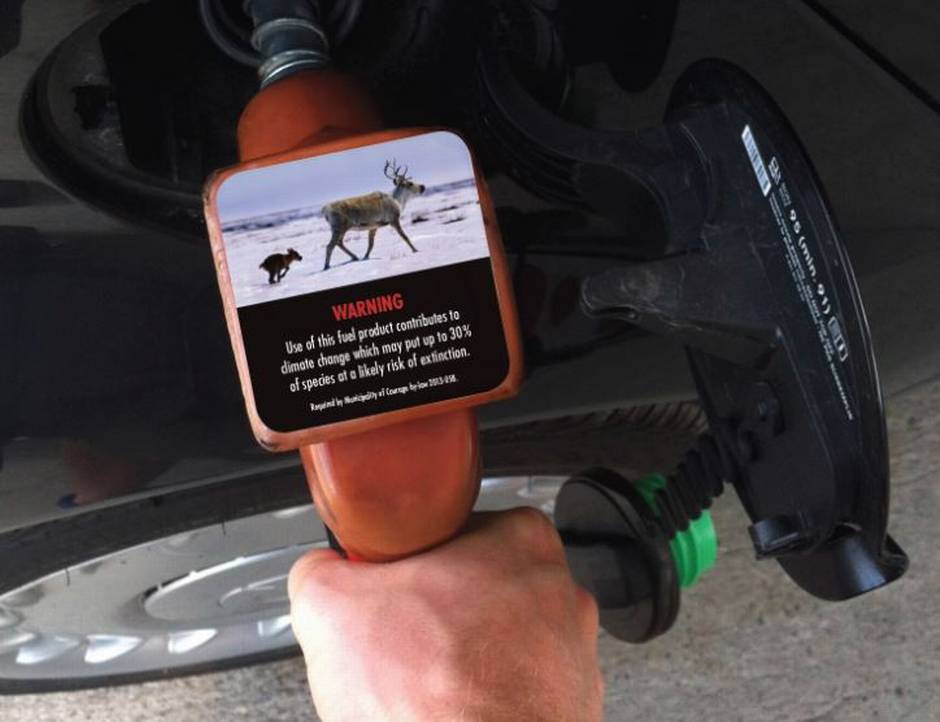 Images provided by Our Horizon

“About 50 per cent of the city’s greenhouse gas emissions are created by vehicles,” says North Vancouver mayor Darrell Mussatto, in a statement after the bylaw passed. “By reminding people of the connection between the use of fossil fuels and climate change, while providing fuel efficiency and active transportation tips, these labels will highlight the many ways we can reduce our impact on the environment.”

“The labelling proposal directly links the consumption of fossil fuels to the impacts of climate change,” says Robert Shirkey, the founder of Our Horizon, the group pushing for the labels in cities across North America.

Shirkey says even though people have been seeing the message that we need to change our actions for years, it is often presented through the media as a problem that is distant.

“[This label] engages the reader in a manner that transitions them from a passive observer to active participant,” he says. “That’s a critical precursor to change.” 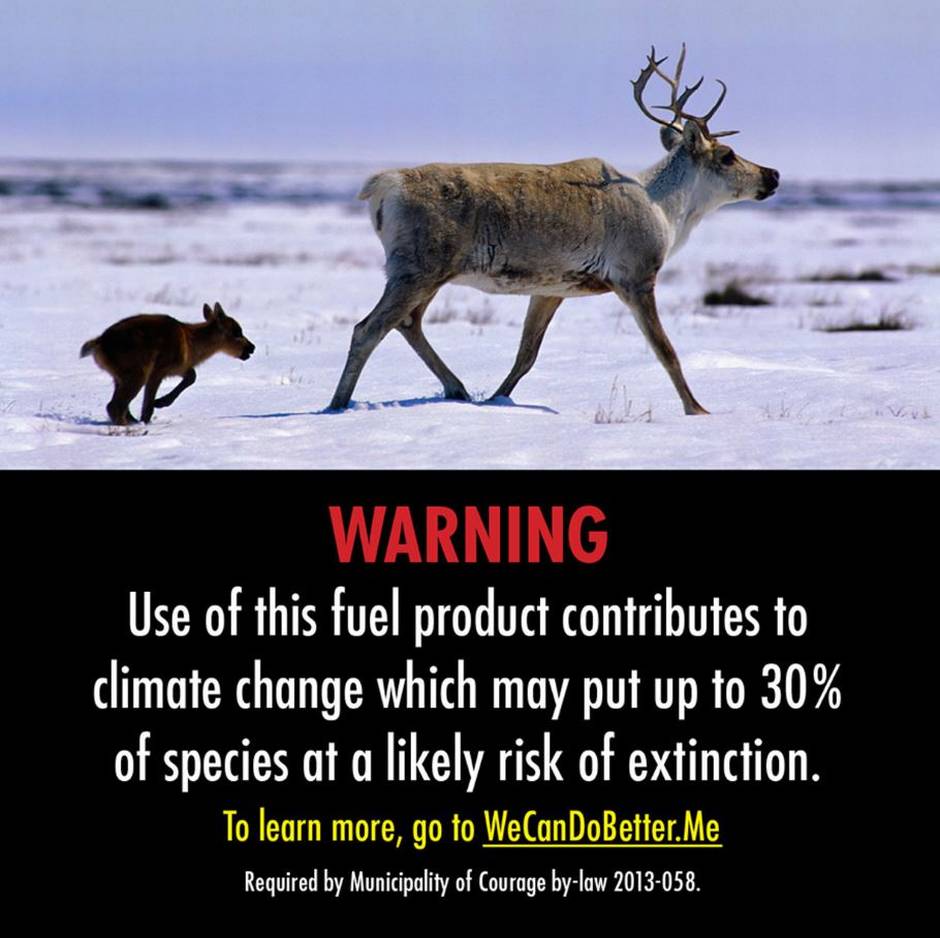 The Toronto lawyer says he got the idea to target the demand-side while stuck in traffic on Highway 401 in 2010. He listened as radio pundits, environmentalists and callers blamed BP for the oil spill in the Gulf of Mexico.

“As I sat there, I counted 14 lanes of barely-moving vehicles, all burning fossil fuel,” he says. “It became obvious to me there was a disconnect that needed to be addressed. The only reason that offshore drilling rigs even exists is because there’s a market for the product it delivers.”

Shirkey says activists and the media ‘upstream the problem’ by placing blame on the oil sands or pipelines, which increases the disconnect.

For Shirkey, the labels are a simple way to communicate the hidden cost to the end user. He drives a car and doesn’t want the labels to be thought of as a way to guilt drivers, but wants drivers to understand the implications and think about ways to conserve fuel or use it more efficiently: carpooling, bicycling, taking public transit, ensuring the tires on your vehicle are properly inflated, etc.

“Our greatest obstacle to transitioning to a more sustainable future is the systemic inertia of the status quo,” he says. Pumping gas is an automatic behaviour people have been doing for generations. “Complacent, disconnected markets don’t drive change.” 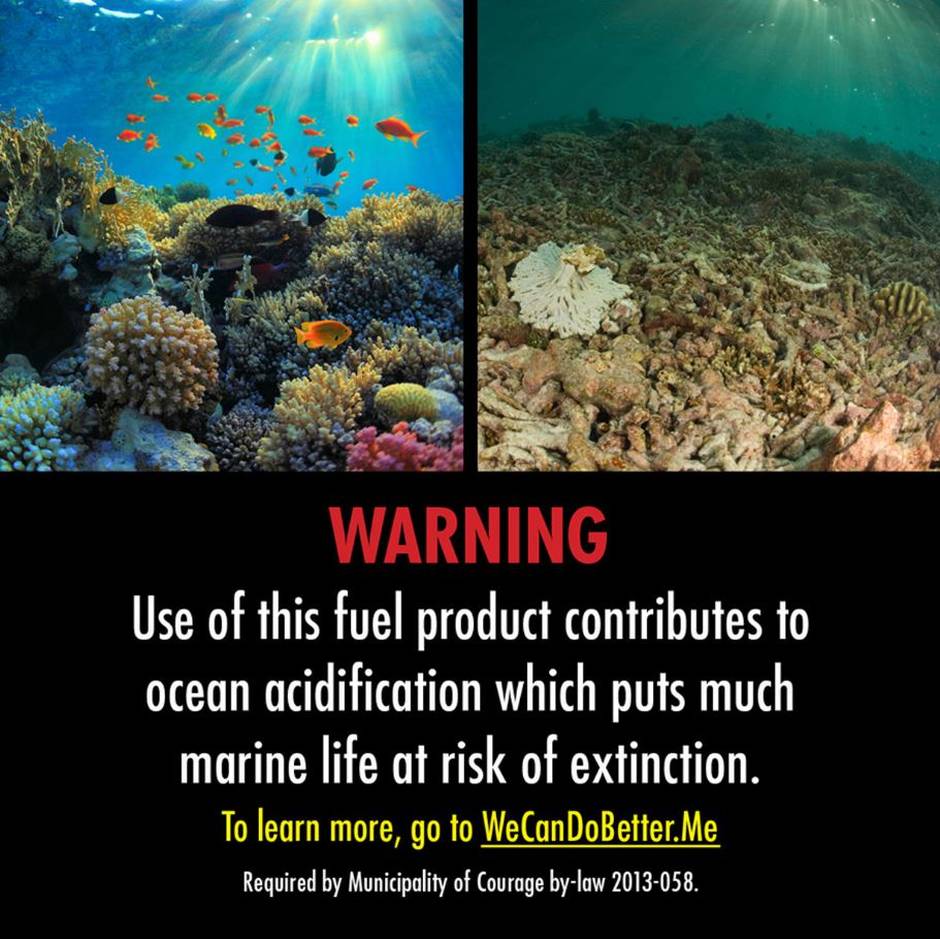 In North Vancouver, the cost for the labels is estimated by city staff at $3,000-$5,000 total and it will be implemented at 6 stations. The city will cover the cost out of its more than $65 million operating budget.

"Whenever we are spending taxpayers money we have to be cognisant it is taxpayers money, but it is a small price to pay," says Buchanan. She is skeptical about the immediate impact acknowledging behavioural change is a challenge for humans, but with the combination of many strategies she is confident change will happen.

"As a city we aren't saying we don't want you to drive your vehicle," Buchanan says adding she hopes people will begin to see driving as one option.

With one big victory under his belt, Shirkey plans to press on, trying to convince more cities to follow North Vancouver lead.

“It’s just a sticker,” he says. “In the face of the greatest challenge of our time, how can we not do it? Can you imagine telling our children and grandchildren that we lacked the courage to put a simple sticker on a pump?” 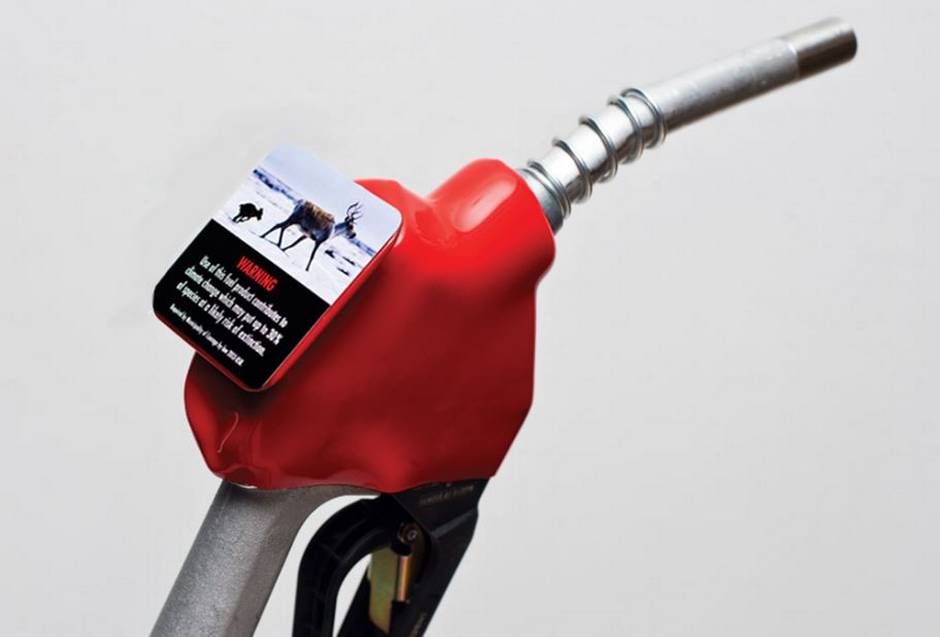