The Ontario government has flip-flopped on the electric vehicle incentive program, reinstating the maximum subsidy for battery-electric vehicles priced between $75,000 and $150,000.

The move, which is part of Ontario's Climate change Action Plan, permits buyers of most new Tesla vehicles to receive the full $14,000 rebate instead of just $3,000. It retroactively applies to vehicles bought since Jan. 1.

"The changes address concerns that some zero-emission BEVs (battery electric vehicles) were receiving lower incentives than higher-emitting plug-in hybrid electric vehicles (PHEVs), said Bob Nichols, Ontario Ministry of Transportation (MTO) spokesperson. "Removing the $3,000 vehicle cap for BEVs only, ensures that the program reduces the purchase price premium at all price ranges, promoting greater EV adoption across all segments of the market and maximizing the program's potential."

The province increased incentives for plug-in electric vehicles last February, but capped the rebate at $3,000 for vehicles with a sticker price of between $75,000 and $150,000. Vehicles priced at more than $150,000 became no longer eligible for subsidies, and this continues to be the case.

"If you can afford a $150,000, you don't need a $14,000 subsidy from the rest of us," said Christine Van Geyn, Ontario director of the Canadian Taxpayers Federation. "Those cars are worth more than the median salary in this province. Most people in this province are driving cars worth less than the subsidy these people are given."

The change in the incentive program came a few months before the Canadian Taxpayers Federation reported more than $14 million of the $39 million spent on electric vehicle incentives between 2010 and January 2016 were for vehicles priced at more than $70,000. The Canadian Taxpayers Federation obtained the information from a Freedom of Information Act request. In addition, $27,690 of subsidies in 2015 went to five owners of the Porsche 918, a plug-in hybrid that retails for about $1.1 million.

"There was a lot of outrage when people found out that the buyers of million-dollar Porsches were getting subsidies," said Van Geyn. "The government changed the policy and now looks like they are changing it back when no one is paying attention."

Van Geyn says the province is raising taxes, putting a carbon tax in place and people are "literally crying to the premier because they can't pay their hydro bill." She says the province hasn't been clear about what it is going to spend the money on. "Is this one of the initiatives, subsidies for millionaires?"

The average Canadian spends around $28,000 on a new car and the median family income in Ontario is $79,000, according to Statistics Canada, for 2014 the most recent year figures are available.

"If you are buying a $70,000 car, you are probably doing better than the rest of us," says Van Geyn. "(Tesla) is a company that is doing interesting stuff, I just think they should rely on people wanting their product. It's a luxury vehicle."

According to the Office of the Integrity Commissioner site, Tesla was lobbying the Ontario government last year. Tesla didn't immediately respond to a request for an interview.

The Ontario government says the changes will help it hit its goal that five per cent of new passenger vehicles sold or leased by 2020 will be electric or hydrogen-powered. There are around 9,000 electric vehicles registered in Ontario and less than 2 per cent of new cars sold nationwide are hybrids or electrics. Ontario is also committing to build 500 charging stations across the province by the end of March.

"Transportation emissions are the single-largest source of greenhouse gas pollution in the province," said Glen Murray, Ontario environment and climate change minister, in a statement. "That's why we are moving forward on a commitment to make it easier for Ontarians to purchase and drive an electric vehicle." 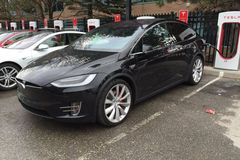