Almost every major car company, plus Google and Uber, are spending millions of dollars to develop self-driving cars. But there is one group who isn't so enthused – drivers.

A new study from the University of Michigan shows almost half of people asked don't want to give up control to a computer in any driving capacity. It found 45.8 per cent of drivers surveyed said they don't want any self-driving capability at all. This doesn't include technology currently available on cars that is often considered semi-autonomous, such as adaptive cruise control or lane keep assist.

More than a third of respondents would accept a partially autonomous vehicle and just 15 per cent said they would want a fully self-driving car.

The vast majority, 95 per cent, want a self-driving car to have a steering wheel and pedals so the driver can take control if desired. Eliminating the wheel and pedals is exactly what Google is hoping to do, while many auto makers are slowly introducing autonomous driving features to cars.

The study by Brandon Schoettle and Michael Sivak at The University of Michigan Transportation Research Institute surveyed 618 drivers. A similar study was conducted in 2014. Repeating the study now shows people still have reservations about the technology.

"Overall public opinion has been remarkably consistent over the two years that this survey has been conducted despite media coverage of self-driving vehicles," Schoettle told the Detroit Free Press. "This just lays out one of the hurdles that needs to be overcome for people to accept this technology. People still want to take control, and they're afraid of truly giving up control."

The percentage of respondents who don't want any self-driving technology rose from 44 per cent the last time the survey was done.

In Canada, a study conducted by consumer market research firm GFK found only a quarter of Canadian drivers see the appeal of self-driving cars. That number is much lower if the autonomous vehicle can't be used as a robotic designated driver.

"The majority of people are risk adverse, the problem will be with the mainstream people getting on board," said Tripat Gill, an associate professor at Wilfred Laurier University's Lazaridis School of Business and Economics and the Canada research chair in Market Insight and Innovation. Gill is researching how to make self-driving cars seem less risky and radical and not involved with either survey. "Perceived risk is consumers' biggest factor in adopting new technology ... you are giving up control to a new agent and you don't know if that agent is good enough."

Gill says there is no simple solution, but the key will be allowing people to see self-driving cars on the road working perfectly.

"Proving that things are working fine is crucial," he said. "It'll be slow, but there has to be some visible examples and (people have to) see it helping you out."

Seo Ho Choi, the team leader for developing human machine interface with Kia, says concerns fade quickly when one spends time in a car with self-driving features. Choi adds the comfort level of the driver increases when he or she receives the right information. Part of Choi's job is to figure out what that right information is. The goal for Choi and his counterparts at other auto makers is to lower that number from 46 per cent. 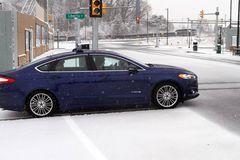 Volvo unveils a seat 'time machine' hoping to change how we won't drive
November 20, 2015
Follow Jordan Chittley on Twitter @JChittley
Report an error Editorial code of conduct
Due to technical reasons, we have temporarily removed commenting from our articles. We hope to have this fixed soon. Thank you for your patience. If you are looking to give feedback on our new site, please send it along to feedback@globeandmail.com. If you want to write a letter to the editor, please forward to letters@globeandmail.com.
Comments