British car buffs taking to the roads again are as sure a measure of summer coming as dandelions painting Canadian lawns golden.

The cars, like the weeds, first appear solo, then multiply. They're a chummy bunch, British car buffs, remarkable for being largely unencumbered by the status awareness associated with Ferraris, Porsches, Bugattis. The badges on these cars matter less than the country of origin.

In Vancouver, at the 32nd All British Field Meet (May 6 at VanDusen Botannical Garden), the Mike Powley Motor Mouth Spirit Award names "the person who best represents a true classic British car enthusiast." Powley, who died in 2012, emceed the show's awards presentation for almost 20 years.

"I'm not sure that there wouldn't be similar enthusiasts among other groups, say those into Italian cars," meet co-organizer Patrick Stewart says when asked what exemplifies a classic British car enthusiast. But the fact his show's award exists, along with the absence of any known Canadian award for Italian, German, French or even Czech car enthusiasts, surely makes the case: British car buffs are the model of major dedication.

Hands-on tinkerers, Stewart says first as he sets out to describe past winners, followed by eccentricity ("real characters, a couple of them"), Castrol R British motor oil often running strong in family bloodlines, past service as club executives. Finally, "to some degree or another, in every case their lives have revolved around their cars."

Fact is, candidates would loom large at similar events across the country if the Powley award wasn't specific to the B.C. meet. First up, the Ancaster British Car Flea Market, as always the second-last Sunday in April.

In its 36th year, Ancaster committee chair Bill McNaughton anticipates 300 cars, 60-plus vendors, a crowd of 2,000 making its way on April 23 from throughout Southern Ontario and three U.S. states to the Ancaster Fairgrounds near Hamilton.

This show marks the anniversaries of the MGB, introduced 55 years ago as the successor to the MGA; the TR3A, 60 years; and the Jensen-Healey, 45 years. Each marque has its fans but, at Ancaster, all cars are adored.

All recall the glory years of failed manufacturers – BMC, Sunbeam, Triumph among them – and others now owned by international giants, Jaguar by India's Tata, Mini by Germany's BMW, Aston Martin bankrolled by Italy's Investindustrial. However fierce the rivalries in rallying and racing that fuelled the sports-car era of the 1950s and 60s, they're all remembered as winners.

Whatever social chasm may have existed between the original owners of, say, a Rolls-Royce Phantom II and an Austin 7, when England's class system remained starchy, the cars' current caretakers share common ground.

Mike McGraw, of Burlington, Ont., who still drives the 1974 MGB he bought new out of college and is restoring a Morgan, attends the flea market for the conversation. "I am not a dues-paying member of any club, but I know a number of people in the British Sports Car Club, Lotus Club of Canada and the Morgan Sports Car Club of Canada," he says. "I find conversation flows freely among them all; there is always something of interest to be seen or learned from others."

One needn't be British, or even of British stock. In Quebec, the Club Automobile Rendez-Vous des Anglaises claims 400 members and 23 different makes of English cars. The Montreal MG Car Club pulls cars out of winter storage with a Tuneup and Coffee in Vaudreuil-sur-le-Lac on April 29. A drive to Musée Gilles-Villeneuve at Berthierville, co-organized with the Montreal Jaguar Club, follows on May 20.

The largest all-British, single-day gathering in North America remains the British Car Day in Bronte, Ont., expecting 1,000 cars this Sept. 17, against more than 600 cars and motorcycles at Vancouver. What makes the spring events special, though, is that contrary to Bronte signalling the countdown to winter storage, these herald the driving season having just begun.

At Amelia Island, a classic-car ‘beauty contest’
March 18, 2017
How to navigate the rules of car restoration
September 19, 2016 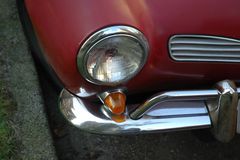 Canadian okay if rare 1971 Ferrari doesn't sell at famous U.S. auction
March 3, 2017
Follow us on Twitter @globeandmail Opens in a new window
Report an error Editorial code of conduct
Due to technical reasons, we have temporarily removed commenting from our articles. We hope to have this fixed soon. Thank you for your patience. If you are looking to give feedback on our new site, please send it along to feedback@globeandmail.com. If you want to write a letter to the editor, please forward to letters@globeandmail.com.
Comments