It started as the Torino, then shifted to the Bobcat. But the name that eventually won out as Ford downshifted in the mid-1970s into really tiny car production was the Fiesta.

And while the Fiesta has carried the blue oval badge through six generations worldwide, it only lasted three years in North America.

However, Ford's smaller-than-a-Focus new Fiesta is set to return to Canada early this summer. Whether it becomes yet another small car card dealt to keep Ford in a game it has been reluctantly involved in - and intermittently sitting on - in North America remains to be seen. As Henry Ford II, then-CEO of Ford and grandson of the company founder, noted as the '70s dawned: "Whether we like it or not gentlemen, we can't go on for much longer without building a small car."

The timing was right the first time, when Ford gave a regal dynastic nod to the project that saw the arrival in 1976 of the successful baby B-class Fiesta in Europe. But Fiesta was only sold here from 1978-80, after which Ford North America lost interest in sub-compacts, relying on its compact Escort and later Focus to meet small car buyers' needs. It dabbled again in 1988 with the Mazda-based, Kia-built Festiva, and the renamed second-generation Aspire, which lasted from 1994 to 1997.

None did much for Ford's bottom line, upholding another vintage company quotation, this one from a bean counter: "Mini cars, mini profits."

But the echo of Ford's comment must have reverberated off boardroom walls a couple of years ago when its U.S. execs bleakly eyed the impact of US$4-a-gallon gas, with perhaps the more prescient also unsettled by the stirring undercurrents of recession, and decided to import a B-class car again.

When Ford delivered his decree, his company was actually building "small" cars on this side of the Atlantic: the Comet and later Pinto; and in Europe, the Anglia and Cortina, followed by the Escort. But what he was talking about were B-class cars to compete with the really teeny-weeny offerings of Renault, Citroen, Fiat and BMC, which held a large segment of the European market.

There were real concerns about the future in Ford's boardroom as the 1970s beckoned. Its share of world car production in 1950 had been 22.4 per cent, but by 1970 it was down to 16.9 per cent and trending further downhill. A new problem was looming in the form of small cars from Japan, which Americans were taking an unhealthy interest in.

Then-Ford president Lee Iacocca likened the company's lack of involvement in the B-class sector in Europe to a shoe store that offered "nothing smaller than a size seven on the grounds that smaller sizes only interest one customer in five."

The Fiesta had its genesis in a small car task force launched in 1969 by Ralph Peters, Ford of Europe's vice-president for product planning, and Jim Donaldson, advanced planning manager. This was at a time when, as one observer put it: "The B-Car at Ford was like the Loch Ness Monster. Everyone talked about it but nobody ever saw it."

Teams from Cologne, Germany, and the Dunton R&D centre in England were soon working up plans, initially for a car that would serve Europe but also be simple enough to be sold into less-sophisticated global markets. However, the focus soon changed to a just-for-Europe B-car, and by autumn 1970, a cobbled-together pre-prototype - dubbed the Torino - was ready to show company brass, accompanied by some sexy styling studies.

The B-car idea bubbled along for a while, but by 1972 had become a full-fledged project under Hal Sperlich, Iacocca's special assistant, to build a car he named the Bobcat.

This included measuring up the opposition - buying, dismantling and analyzing the parts of other makes and then cranking up serious styling (three studies were authorized) and all the other efforts, including a factory to produce it, that would be required to realize a model of a type of car Ford had never built.

In December 1973, Ford's board of directors, spurred by the energy crisis and just-announced Corporate Average Fuel Economy requirements, approved the Fiesta. The car would eventually involve virtually all the national arms of Ford of Europe and an expenditure of more than a billion dollars.

"The biggest outlay every made by Ford to build the smallest car they have ever produced," said Eduoard Seidler, author of Let's Call It Fiesta: The Auto-Biography of Ford's Project Bobcat . The Fiesta would come to market three years later, and be built in Spain, Germany (North American cars came from Cologne) and England.

What emerged from a half-decade of effort proved to be worth the wait.

The Fiesta's crisply styled two-door hatchback bodywork (here with round versus square Euro-headlights) measured just 3,736 mm in length (versus 4,300 mm for the Pinto) and it had a nicely crafted interior, at least on the top-line Ghia model, which even had a tachometer.

The engine was basically Ford's Kent, a four-cylinder, overhead valve design that was available as a 957cc unit in Europe, but only as a 1.6 litre, producing 66 hp, in North America. It was mounted transversely and drove the front wheels through a four-speed manual transaxle. It was capable of getting the car to 100 km/h in 10.5 seconds and produced fuel economy of 9.5 L/100 km. Base price in the U.S. was $3,680 versus $2,995 for a Pinto.

The Fiesta proved successful with enthusiasts and was used in racing and rallying. It's a shame Ford didn't let it continue here where it may have built up a strong enthusiast base.

But what's in a name? How did Ford get from Torino to Bobcat to finally Fiesta?

Torino was already a U.S. Ford model and Bobcat was used by Mercury. Suggested names included Fiesta, Amigo, Bambi, Bravo, Bebe, Cherie, Chico, Forito, Pony and Sierra. Henry Ford liked the alliteration of Ford and Fiesta so that's what it became - after he made a call to General Motors to see if it was okay, as GM owned the rights to the name. 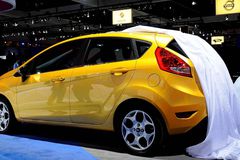