Many such operations flourish. The Guild of Automotive Restorers in Bradford, Ont., may be the best known, as the host of Restoration Garage, a staple on the Canadian History Channel. Smaller shops, such as respected Greer Restorations in Cobourg, Ont., are found across the country.

But RM stands alone with an unmatched five best-in-show vehicles at the Pebble Beach Concours d'Elegance, the foremost event of its kind, at Monterey, Calif., since 2001. On Sunday, nine cars restored or prepared by RM will be among the classics arrayed on the 18th fairway, high above Monterey Bay.

Wealthy collectors trust only a few shops with their diamonds in the rough: a full restoration can range from $100,000 to $1-million and require one to two years.

Walking into the RM shop is the equivalent of peeking into Santa's workshop, but for the prices of the presents.

Gray-Dort, RM's predecessor in local auto lore, began in 1915 with William Gray and Sons, local carriage makers, hooking up with Dort Motor Co. of Flint, Mich., to manufacture cars in Chatham, Ont., to compete with McLaughlin in Oshawa, Ont., with his Buick connection, and Ford in Walkerville, Ont.

Rob Myers (RM) began in 1976 in a two-car garage on Indian Creek Road, after first restoring cars with his father. "I worked with Rob from time to time, me on the mechanical side and Rob the body and painting," says Mario Van Raay, now general manager of the restoration shop after a career as a service manager at a local dealership. "We did '57 Chevies, T-Birds, more North American cars than anything exotic."

The cars visible when entering the work area from Van Raay's office are exotic to be sure. A just-restored Mercedes-Benz 300SL sits beside two rare Fords from the Edsel and Eleanor Ford House at Grosse Pointe Shores, Mich., one of them the Speedster Henry's son had built to eclipse the sports cars he'd seen in Europe.

Beyond them, two Bugattis, a Cunningham, Packard Super Eight Victoria, Stutz Weymann, Auburn Boattail Speedster, on and on. As for this year's Pebble Beach concours, RM will ship seven cars, having restored three and prepared four. But Van Raay is loath to identify them, surprise being an element in concours competition, and RM does not reveal clients' names.

Components are distributed among shops – upholstery, woodworking, metal fabrication – like pieces in the early stages of a three-dimensional jigsaw puzzle.

Your eye fixes on 15 bags of silica sand, 50 pounds apiece, stacked within the otherwise empty engine bay of a 1924 Isotta-Fraschini Tipo 8A, an imposing Italian rival to Rolls-Royce. The reason? With the Isotta's straight-eight engine in process elsewhere, the sand bags serve to duplicate any deflection in the chassis caused by the weight of the engine and drivetrain – important in maintaining proper door and panel throughout the restoration process.

In another room, Jamie Bourdeau has created a new steering wheel for the Isotta, the original having deteriorated beyond repair, from a mould he made from Smooth-On, the same product used to create special effects in the Harry Potter movies. The job took three days of Bourdeau's time; the 30-year RM employee is first a woodworker, but has developed a talent for recreating unobtainable parts.

Hard to imagine, with Tipo 8A components scattered about the specialist departments, that the completed Isotta-Fraschini would be driven Aug. 13 on the Tour d'Elegance along California's fabled Highway 1. Completing the tour can be a tie-breaker if cars score equal marks on Sunday.

The fabricating department can fashion a fender or a complete body. "Their knowledge of steel and aluminum enables them to judge the shrinking and stretching limits of the piece they're working on," Van Raay says. "Our goal is to save as much of the original metal as possible."

Some staffers begin as apprentices from area colleges, while others have years of local trades experience. "When we're hiring, I look for creativity," says Don McLellan, the quality-control manager. "A person's side interests, the hobby he had as a kid, can tell you if he has that creativity." McLellan's was radio.

Newcomers are soon tested. A young mechanic, for instance, might be asked to tune a Ferrari V-12 engine. "Multiple carburetors, twin ignition, throttle shafts that may be worn after 50 years – it's not easy," McLellan says. Getting it wrong, needing help, is not a firing offence; it's the response to frustration that's telling.

Van Raay hesitates to say how many fail to make the cut. "Through a careful selection process, the work force has increased by seven to 27 over the past five years," he allows. "We're hiring mechanics and metal fabricators right now, scheduling for work through 2017."

The pace increases as Pebble nears. The week before this visit, employees put in 90 hours of overtime. When a call comes in midday that a Ferrari Daytona's dash needs recovering before going to a RM Sotheby's auction at Villa Erba, Italy, on May 23, Vlad Nesic works Sunday to get it done.

"I've got 85 work orders on the go here now," says shop foreman Ernie Morreau, a partner in the restoration business with McLellan and Myers.

Morreau plans each restoration hour by hour, beginning with disassembly by a mechanic, bodyman and upholsterer. He's been quarterbacking the process for 10 years, after starting as a mechanic in 1997. "The last car I was lead mechanic on was the Horch 853A that was best-of-show [at Pebble Beach in 2004]."

Many of the cars on the floor are not concours candidates. A like-new 1959 Mercedes-Benz 220 sedan will be a weekend driver. Even the stately 1934 Packard Super Eight is destined for street duty; an American drag racer intends to arrive at the track in style.

RM Auto Restoration can also make an entire car. A replica of Henry Ford's 999 race car was created for a U.S. collector, piece by piece, based on photographs and measurements of the original at the Henry Ford Museum in Dearborn, Mich. The engine block and flywheel were cast at a foundry in Brantford, Ont., but most everything else was crafted in this Blenheim shop.

"Our people are among the finest craftsmen in the world, and they're entirely local people," Van Raay says. "They've developed their craft through their commitment and passion for vintage automobiles – hence the longevity of most employees." 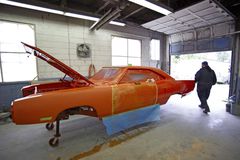 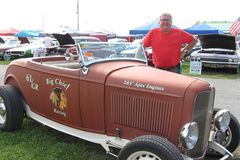 In photos: Peter Cheney's nine favourite summer rides Gallery
June 19, 2017
Follow us on Twitter @globeandmail Opens in a new window
Report an error Editorial code of conduct
Due to technical reasons, we have temporarily removed commenting from our articles. We hope to have this fixed soon. Thank you for your patience. If you are looking to give feedback on our new site, please send it along to feedback@globeandmail.com. If you want to write a letter to the editor, please forward to letters@globeandmail.com.
Comments